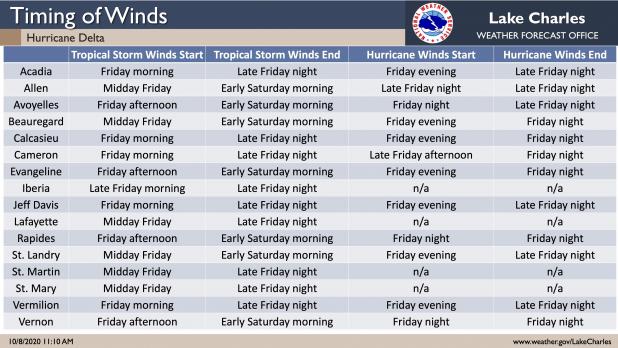 .DAY ONE...Today and tonight.
Outer rain bands associated with Hurricane Delta will begin to push
into the region. Periods of heavy rainfall and gusty winds will
accompany these bands.

Please listen to NOAA Weather Radio or go to weather.gov on the
Internet for more information about the following hazards.

.DAYS TWO THROUGH SEVEN...Friday through Wednesday.

Please listen to NOAA Weather Radio or go to weather.gov on the
Internet for more information about the following hazards.

From the national weather service:

Delta continues to move northwest across the southern Gulf of Mexico this
morning. Delta is expected to continue strengthening through the day
today while also expanding in size. A gradual slowing and turn toward the
north is expected by this evening and a faster north-northeastward
motion is forecast Friday into Friday night. Delta should weaken
slightly as it approaches the southwest Louisiana coast late Friday,
but the system will remain a large cyclone, bringing a life
threatening storm surge and dangerous hurricane force winds to parts
of southwest, south central and central Louisiana. Tropical storm
force winds are expected over most of the forecast area. In addition
to winds and surge, heavy rainfall is expected, with amounts of 6 to
10 inches with local amounts up to 15 inches possible across portions of
southwest, south central and central Louisiana, mainly along and near
the path of the storm center with amounts of 2 to 6 inches elsewhere.

* WIND:
Protect against life-threatening wind having possible devastating
impacts across southwest and south central Louisiana. Potential impacts in
this area include:
- Structural damage to sturdy buildings, some with complete roof
and wall failures. Complete destruction of mobile homes. Damage
greatly accentuated by large airborne projectiles. Locations
may be uninhabitable for weeks or months.
- Numerous large trees snapped or uprooted along with fences and
roadway signs blown over.
- Many roads impassable from large debris, and more within urban
or heavily wooded places. Many bridges and access routes
impassable.
- Widespread power and communications outages.

* FLOODING RAIN:
Protect against life-threatening rainfall flooding having possible
extensive impacts across southwest Louisiana and Central Louisiana. Potential
impacts include:
- Major rainfall flooding may prompt many evacuations and rescues.
- Rivers and tributaries may rapidly overflow their banks in
multiple places. Small streams, creeks, canals, and ditches may
become dangerous rivers. Flood control systems and barriers may
become stressed.
- Flood waters can enter many structures within multiple
communities, some structures becoming uninhabitable or washed
away. Many places where flood waters may cover escape routes.
Streets and parking lots become rivers of moving water with
underpasses submerged. Driving conditions become dangerous.
Many road and bridge closures with some weakened or washed out.

* TORNADOES:
Protect against a tornado event having possible limited impacts
across south central Louisiana. Potential impacts include:
- The occurrence of isolated tornadoes can hinder the execution
of emergency plans during tropical events.
- A few places may experience tornado damage, along with power
and communications disruptions.
- Locations could realize roofs peeled off buildings, chimneys
toppled, mobile homes pushed off foundations or overturned,
large tree tops and branches snapped off, shallow-rooted trees
knocked over, moving vehicles blown off roads, and small boats
pulled from moorings.

Elsewhere across Southwest Louisiana and Southeast Texas, little to
no impact is anticipated.

* EVACUATIONS:
Listen to local official for recommended
preparedness actions, including possible evacuation. If ordered to
evacuate, do so immediately.

For those not under evacuation orders, assess
the risk from wind, falling trees, and flooding at your location. If
you decide to move, relocate to a safer location nearby. If you do
not relocate, help keep roadways open for those under evacuation
orders.

If evacuating, leave with a destination in mind
and allow extra time to get there. Take your emergency supplies kit.
Gas up your vehicle ahead of time.

Let others know where you are going prior to
departure. Secure loose items and pets in the car, and avoid
distracted driving.

* OTHER PREPAREDNESS INFORMATION:
Now is the time to complete all preparations to protect life and
property in accordance with your emergency plan. Ensure you are in a
safe location before the onset of strong winds or possible flooding.

Failure to adequately shelter may result in serious injury or loss of
life. Always heed the advice of local officials and comply with any
orders that are issued. Remember, during the storm 9 1 1 Emergency
Services may not be able to immediately respond if conditions are
unsafe. This should be a big factor in your decision making.

Keep cell phones well charged. Cell phone chargers for automobiles
can be helpful, but be aware of your risk for deadly carbon monoxide
poisoning if your car is left idling in a garage or other poorly
ventilated area.

Storm surge is the leading killer associated with tropical storms and
hurricanes! Make sure you are in a safe area away from the surge
zone. Even if you are not in a surge-prone area, you could find
yourself cutoff by flood waters during and after the storm. Heed
evacuation orders issued by the local authorities.

Rapidly rising flood waters are deadly. If you are in a flood-prone
area, consider moving to higher ground. Never drive through a flooded
roadway. Remember, turn around don`t drown!

Closely monitor weather.gov, NOAA Weather radio or local news outlets
for official storm information. Be ready to adapt to possible changes
to the forecast. Ensure you have multiple ways to receive weather
warnings.