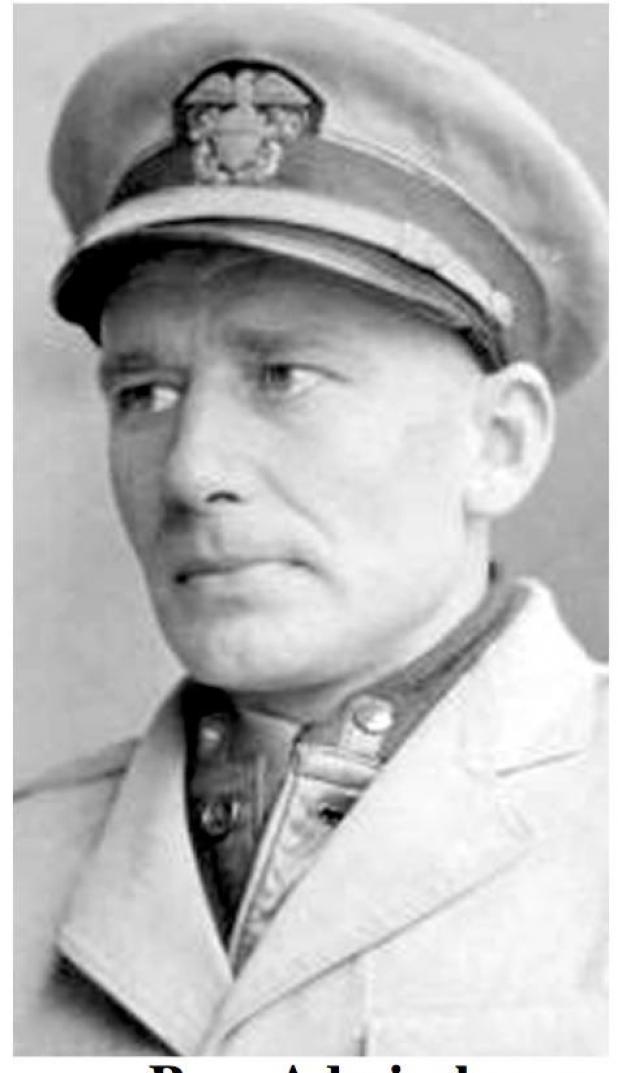 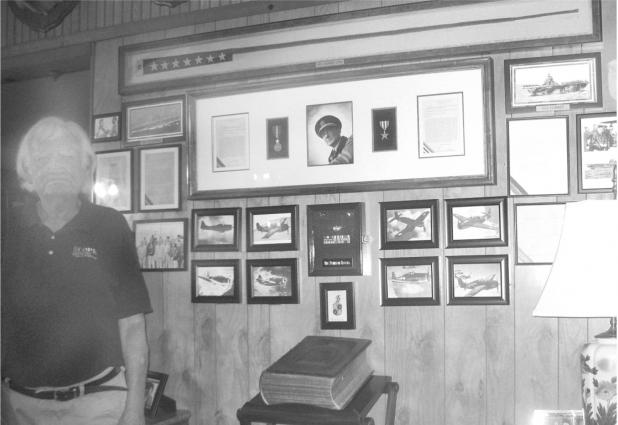 Gil Browning stands at the wall of honor he created for his father.

Remembering a man credited with bringing victory to the U.S.

This column is tucked between Armed Forces Day, which was celebrated on May 18 and Memorial Day, May 27.

So it’s appropriate that this is about a man who had an outstanding military career and helped fashion much of the United States victory in the Pacific Theater during World War II.

The late Rear Admiral Miles Rutherford Browning is the father of Gil Browning of Marksville.

Adm. Browning served as Aide and Chief of Staff to the famous American Fleet Admiral William Halsey. In fact, Halsey was quoted in a Chicago Sun Daily News spread by saying, “I give Miles Browning the full credit for every success we have had in the South Pacific.”

Pretty heady stuff for a boy from Perth Amboy, New Jersey, who received an appointment to the Naval Academy in Annapolis, Maryland.

Gil, who lives in the Spring Bayou area outside of Marksville, has created a wall of honor for his father.

Above the faded war photos with young men smiling uncertain smiles, there proudly displayed in a special case is the captain’s flag from the USS Hornet. Gil had it restored in New Orleans. The flag, which is the stars and stripes, is in the shape of a narrow pennant.

“It was weather beaten and shot up, “Gil described, “I was amazed at how well it was restored.”

The litany of famous and battle tested ships the Admiral served on is impressive. Anyone who knows a modicum of World War II history has heard of the great ships such as the Yorktown, Hornet and the grandaddy of them all, the USS Enterprise.

Although not serving on the USS Hornet at the time the famous Doolittle Raid over Tokyo was launched in April of 1942, Adm. Browning commanded the carrier from May of 1943 to November of 1944.

The Doolittle Raid, which inflicted minor damage, was a huge psychological victory for the United States and its allies.

From the Enterprise, Halsey, with Miles Browning as his Chief of Staff, commanded one of the Pacific fleets.

Because of a severe case of shingles, Halsey was stateside when the Battle of Midway took place. Halsey is quoted as being very disappointed in having to miss one of the most pivotal battles of the pacific.

It was Browning’s judicious planning and brilliant execution that secured the victory of the harrowing three day battle of Midway.

Browning waited until all the Japanese planes had returned to the carriers when he began the U.S. attack.

According to son, Gil, “He knew the Japanese planes were out of gas and ammo and could do nothing to defend the carriers.” In the battle of Midway, Japan lost four carriers and their power in the Pacific was coming to an end.

Browning continued his military career under Halsey’s tutelage and support.

After viewing the carnage of Pearl Harbor, Halsey was not only angry but determined to destroy the Japanese fleet. He need- ed the best tactical minds he could find, and Browning was one of them.

The two met in Pensacola Florida when Halsey, a young man was learning to fly at a military installation. Browning was also stationed there and the two became friends.

One has to wonder if the fact that they were both from New Jersey wasn’t part of their foundation of friendship.

Rear Admiral Browning retired Jan. 1, 1947 with an impressive inventory of medals and commendations foremost among them are the Silver Star, Distinguished Service Medal and a Presidential Unit Citation.

Add to that, probably the most important of recognitions, a very proud son.

“My Daddy was a hero,” Gil said emphatically, “no question about that.”