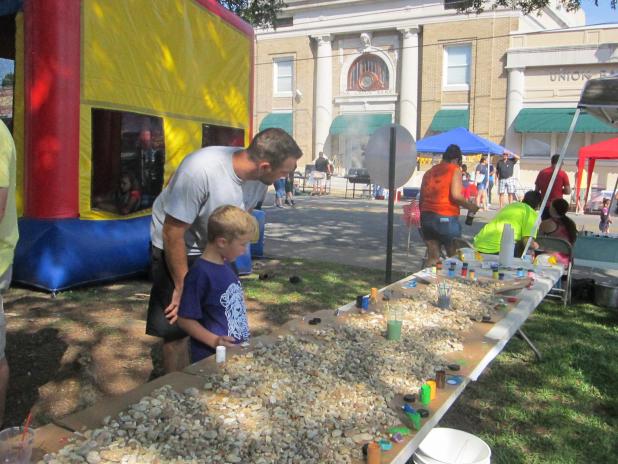 8-year-old Addison Gormsen and dad Wesley Gormsen of Marksville (at left) check out the rock painting table in the Kids Corner of the Marksville Farmers Market on a recent Saturday. The painting activity along with a bounce house was a popular attraction for kids while parents visited local produce and arts & crafts vendors. There are activities for kids each Saturday in June at the market. {Photo by Raymond L. Daye}

There was a definite “bayou” theme to the Marksville Farmers Market on June 10. The event is held every Saturday in June, but each one has special attractions.

On June 10, a children’s parade with the theme “Born on the Bayou” brought smiles to shoppers and candy to children attending the event on the courthouse square.

Brayden Dauzat of Marksville won the wagon division and Lily Blanchard of Marksville was first in the bicycle category. Both received lifetime hunting and fishing licenses provided by sponsors Crispy Cajun Fried Chicken and Marksville Collision Center. All other participants received a $5 cash prize from long-time civic leader Eleanor Gremillion.

The Spring Bayou Restoration Team has a booth at the market and issues door prizes and acts as host.

The “Kids Corner” in front of the courthouse has featured rock painting, a bounce house, and a bubble-blowing machine. Other activities are available each Saturday.

Cajun music fiddler Gerard Dupuy and the classic rock and roll guitar of Sal Torino have added to the festival atmosphere.

Of course, fresh produce is the focus of the market with other items being sold around the courthouse square.

With three of Marksville Farmers Markets down and only one to go, at least one shopper put voice to what others were no doubt thinking.

“Why can’t we keep doing this after June?”