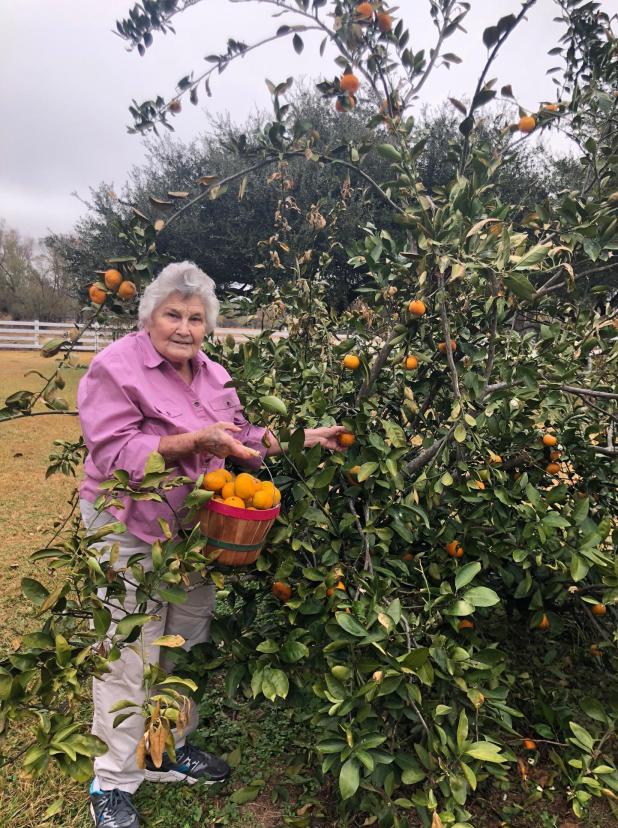 A BUMPER CROP OF SATSUMAS

Rachel Dufour of Plaucheville picks a basket of satsumas in late November. The tasty citrus is hardy enough to withstand the periodic cold snaps of this area. Rachel said this tree is about six years old and produced over 300 satsumas this year. An orange tree she received at the same time didn’t make it through the first period of freezing weather, but the satsuma did. {Photo courtesy of Rachel Dufour}

We call them satsumas -- sweet, almost seedless, easy to peel, easy to grow and well-suited to the temperatures in Avoyelles Parish.

They, and their related citrus family, are also called mandarin oranges and tangerines.

Technically, the mandarin family of citrus started in China, the satsuma varieties came from Japan and the tangerine became a favorite snack-sized fruit by way of Tangiers, Morocco.

Whatever you call them, at this time of year they are a perfect breakfast treat -- or an anytime snack. Local satsuma trees’ fruits are ripening at this time in Avoyelles Parish.

Some varieties of satsumas begin ripening in late September. The peak harvest is in October and November. Late varieties can continue producing into December.

The real satsuma lover could grow different varieties that would keep a bowl of the fruit on the kitchen table from Labor Day until Christmas.

Rachel Dufour of Plaucheville is definitely a fan of the sweetly tart fruit.

“I only have one satsuma tree, but boy does it produce plenty,” Dufour said. “The past few years we picked 80 to 90 satsumas from it, but this year we have picked about 300 and it’s still producing fruit.”

Dufour said she’s been giving satsumas to friends, family, neighbors and anyone else she comes across.

“About six years ago my son gave me two trees as a present --- an orange tree and a satsuma tree,” she said. “A big freeze came along and the orange tree didn’t make it. The satsuma did.”

“Sometimes satsumas will over-produce,” Polozola said. “You’ve probably seen some people propping up limbs with sticks. That’s really not good for the tree.”

Polozola said a tree that produces too much fruit “can’t produce enough sugar for the fruit. The satsumas will not be as sweet.”

The weight of the excess fruit may also cause structural damage to the tree.

“The best thing to do in those cases is when the fruit is about the size of a dime or quarter, to trim away 25 to as much as 50 percent of the limbs,” Polozola said. “The fruit will be much sweeter, a much higher quality.”

While it would be great for Avoyelles to become known as a citrus-growing region, it appears the future of satsumas in this area will remain as an “Asian ornamental” plant that just happens to provide its owners with edible treats.

While there are a few vegetable stands around the parish that offer local satsumas for sale, it doesn’t seem likely the fruit will become a local major cash crop anytime soon.

While the mighty orange is still king of the citrus nation, it is contained to very warm climates like Florida, California and the Rio Grande Valley.

As Rachel noted, satsumas are more resistant to cold -- as long as it’s not North Dakota-level cold.

When temperature in the 30s is considered a “brutal cold snap,” the area is safe for satsumas.

Polozola said Avoyelles is close to the northern extent for successful satsuma growing.

“In Avoyelles, you can expect that once every 25 years to get freezing weather that might knock them back somewhat,” he said. “Rapides and Grant have a harder time growing satsumas.”

NO SATSUMA JUICE
There is no “freshly squeezed satsuma juice” for sale in the local supermarkets, but for those so inclined there is a satsuma rum produced by Bayou Rum distillery in Lacassine.

While it may be an eye-opener, it is not recommended as a substitute for good old OJ for your breakfast beverage.

Satsumas came to the United States in 1876 when some trees were sent over from Satsuma Province on Kyushu Island, Japan.

The tangerine arrived from North Africa first, being grown in Florida as early as the 1840s.

Satsumas became a common home addition in the early 1900s when a million satsuma trees were imported from Japan and planted across the Gulf Coast, from the Florida Panhandle to Texas.

The fruit is a major commercial crop in some areas of the South. In fact, online sources noted it is the major citrus crop in the South, outpacing the Florida oranges in the Dixie states.

Its advantages include a peel so easy your 3-year-old can get his own snack. The segments separate easily, so there is less of a mess. The fruit has very little of the bitter white “mesocarp” that often clings to other citrus fruit. It is small -- a good size for a lunchbag treat for work or school.

It is delicious AND nutritious -- high in vitamins A and C with a little bit of calcium, iron and fiber thrown in for good measure.

The satsuma has just enough citrus tartness to make it interesting and enough sweetness to border on addictive.

“They are as juicy and sweet as can be,” Dufour said. “They don’t freeze, they are almost maintenance free and there are almost no seeds. Many of the satsumas have no seeds at all. Every once in awhile you will find one or two.”

TIPS FOR SATSUMAS
The LSU AgCenter provides some interesting and helpful information about this plant variety.

The satsuma tree is an evergreen with low, drooping branches. As Polozola noted, lower branches should be cut off but, if left, must be supported by forked sticks to keep the fruit from touching the ground.

Even if the tree never bore fruit -- and that’s not likely since they are self-pollinating with both “male” and “female” parts -- the tree would be a good addition to the home landscape.

Its leaves are glossy dark green and it has fragrant white flowers.

While the tree is rumored to be able to survive even the worst “black thumb” gardener among us, there are some tips for success.

The tree favors well-drained, slightly acid to neutral loamy soils and plenty of sunshine. In fact, the more sun the more flowers and fruit.

Trees should be planted in January and February.

For the serious gardener, experts recommend grafting the satsuma onto an orange tree variety with a hardier rootstock, such as Citrus trifoliata. (The nurseryman will know what you’re talking about, and you will sound wise by asking).

Dufour said the only attention she gives her satsuma is an annual fertilizing in the fall and spraying for insects after the blossoms fall in the spring.

The AgCenter recommends growers apply fertilizer to the tree annually for best yields. New trees should not be fertilized until new growth appears in March or April. After the second year, fertilizer should be applied in late January or early February, the AgCenter notes.

To protect the tree from the cold, a heavy mulch around the root zone and possibly wrapping the trunk with a blanket or burlap is recommended.

A trick the LSU AgCenter suggests is to water the ground under the tree a day or two before an expected freeze “because the moist soil helps radiate ground warmth.”

Another cold-weather tip from Polozola is for the satsuma grower to conduct an emergency harvest of all remaining fruit -- ripe, ripening and green -- as soon as you know a hard freeze is coming.

“If you don’t pick the fruit, it will freeze and rot on the tree,” he said.

The rule of thumb to determine an emergency is if the forecast calls for temperatures in the 20s for 12 hours or longer.

Some satsuma owners treat their tree almost like a pet.

A Baton Rouge horticulturist said her tree is in a large pot on her patio. The pot is on wheels to allow her to move the favored plant inside when the weather becomes threatening.

Unfortunately, the world is a hostile place even with the best care. Insects and citrus diseases are always a possibility.

Also, if you purchase your satsuma trees elsewhere, it could be quarantined and barred from coming home.

To be sure of the quarantine zones, go to the Louisiana Agriculture Department website at http://bit.ly/34ku4Md.