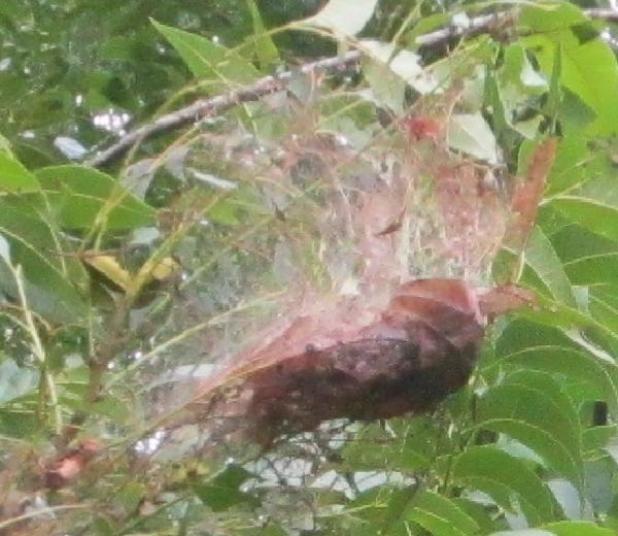 This nest of webworms is one of several in an Avoyelles Parish pecan tree. The webworm is not a threat to trees, but the nests are an unsightly blemish on the household horticulture. {Photo by Raymond L. Daye}

Those balls of webs at the end of your pecan tree branches look more dangerous than they are, the “bug scientists” say.

The creature is called the “fall webworm,” but in the South it starts showing up in the spring and is present through autumn.

“There seems to be a little heavier infestation in this parish this year, and it is earlier,” County Agent Justin Dufour said.

While it is officially called the “Fall Webworm,” it shows up here in the Spring and ends its active cycle in early November.

There can be four or five broods in a season, Dufour said. It takes about six weeks for the lifecycle to go from hatching to emerging as an adult tiger moth, laying more eggs.

Up North, the webworm deserves its name, as it appears in early autumn for a much shorter season of activity. Because it arrives in the autumn, Northern tree owners have little concern because the leaves being munched have already done their job for the tree.

The Dixie webworms are chewing on leaves that still have unfinished business. Dufour said even that fact should not be enough to cause alarm.

“Most infestations in a tree are not enough to be detrimental to the tree’s health,” he said. “It is not fatal, but it certainly is unsightly.”

The webworm is a small, green caterpillar with black spots and long white hairs on its sides. As a moth, they are white with dark spots with a tip-to-tip wingspan of less than two inches.

Its scientific name is Hyphantria cunea.

The webworm eggs are laid on the lower surface of leaves. Upon hatching, the larvae spins its web as a big ball at the end of a branch. Although it may set up housekeeping in any leafy tree, the species seems to favor pecan, elderberry and mulberry.

After shedding its skin five times, a webworm leaves the web and forms a cocoon, usually in fallen leaves or under loose bark. The last brood here will overwinter in the leaf litter and surface layers of the soil. In the spring, the adult moth emerges to start the cycle over again.

Besides angry property owners, the webworms natural predators are wasps, birds and hornets.

The webworms are sometimes mistakenly called tent caterpillars -- but that is another breed of “cat” altogether.

The webworm encases its food within its web.

DIFFICULT TO CONTROL
l
Dufour said there are pesticides that will kill the webworm, but it may be more trouble than its worth.

“Many of the homes in Avoyelles have pecan trees, which the webworms like,” Dufour said. “The nests are high in the tree and homeowners don’t have the equipment necessary to reach them. In addition, a lot of people get concerned when you start talking about spraying chemicals 50 feet up into a tree in a residential neighborhood.”

In addition to that, the web “creates a barrier against the insecticide to a certain extent,” Dufour continued. “You have to reach the web and then you have to be able to penetrate it to get the pesticide to the webworms.”

Dufour said there are products, called “systemic insecticides,” that can be introduced by including it in the water at the base of the trees. The insecticide enters the roots and then spreads throughout the tree, including the leaves. The insects are killed when they eat the leaf.

By that time, the “worm season” could be over.

“However, they do treat for other pests and the product used for those insects is also effective on webworms,” he added.

Proactive property owners and pecan growers can treat their trees prior to the hatching of the worms to possibly prevent the ugly balls of webbing from appearing next year, “but it wouldn’t guarantee no webs. It is not a 100 percent method of control -- not a knockout approach, by any means.”

Property owners have been at war with webworms since the 1920s, so there are proven control methods available.

Entomologists (bug scientists) say perhaps the best method is to literally let nature take its course. In short, if you can reach them, just rip open the webs and invite the birds, spiders, wasps and hornets to an all-you-can-eat buffet. Cutting off web-laden branches is also effective, but may leave gaps in the foliage.

There are biological agents that can be used against the webworms and synthetic insecticides as well. In both cases, they are more effective when applied while the webworms and their colonies are small.

Just one “fun fact” about those balls of webbing.

If you think it’s hot outside, be glad you’re not inside that web. The temperature in that ball reaches 122 degrees.