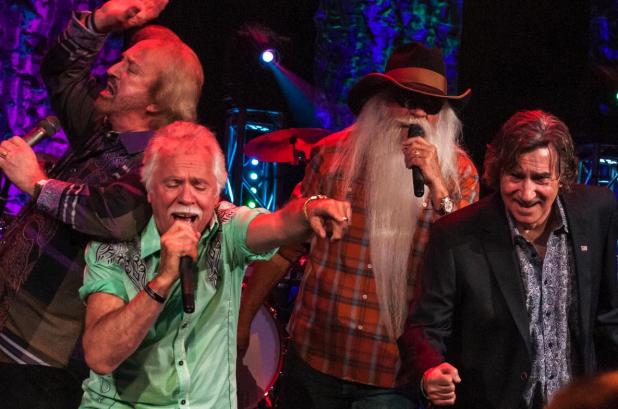 ‘BOYS' WILL BE BOYS -- in Marksville
The Oak Ridge Boys, shown on tour earlier this year, will be performing at the Paragon Casino Resort’s Mari Showroom on April 15. Their four-part harmony has been entertaining fans for over 43 years. The “Boys,” now well into their grandfather years, are (from left) Duane Allen (lead), Joe Bonsall, (tenor) William Lee Golden (baritone) and Richard Sterban (bass). {Photo courtesy of The Brokaw Company}

There are singers whose voice is so distinctive that they are immediately recognized. Willie Nelson, Johnny Cash, Ray Charles belong to that elite class.

There is an even smaller group of singers who, like an offensive lineman on a championship football team, never get to carry the ball but are critical to the team’s success.

The valedictorian of this class may well be Richard “Oom-pa-pa-mow-mow” Sterban, the basso profundo of the Oak Ridge Boys.

Sterban and the other three “boys” -- Duane Allen, Joe Bonsall and William Lee Golden (the beard) -- will bring over 43 years of musical performance experience to the Paragon Casino Resort’s Mari Showroom stage on April 15.

Sterban said he has been through this part of the state several times over those years and looks forward to the food Louisiana is famous for.

“I’m sure I’ll be eating a lot of shrimp while I’m in Marksville,” he said with a laugh. “I don’t think I’ve ever had alligator,” he continued, adding he is not sure whether he will try it this time around or not.

The current version of the Oak Ridge Boys has been a favorite of many for the past four decades.

The earliest version of the group began in 1943 in Knoxville, Tenn. It was called upon by the government to perform for staff and family who were restricted to the nuclear research plant in Oak Ridge, Tenn. The group performed there so often the members changed the name to the Oak Ridge Quartet. They began recording as a Southern Gospel group in 1947.

The name was changed in 1961 to the Oak Ridge Boys to give the group a more contemporary name to match their move from strictly Southern Gospel to a more country sound.

Golden, who sings baritone, joined the group in 1965. Allen, who carries the lead vocal duties, joined in 1966. Sterban came aboard in 1972 to provide the bass for their four-part harmony sound. Bonsall is the “new kid” of the group, being enlisted to take up the task of tenor in 1973. At 68 -- he turns 69 next month -- he is also the youngest member of the group.

While most of the “old” Oak Ridgers were Southern-born and bred, most listeners may not know this world-famous foursome is “half-Yankee.”

Sterban is from New Jersey and Bonsall is from Philadelphia -- but they enjoy Southern Gospel and Country music just as much as Allen, a Texan, and Alabama native Golden.

FROM ELVIS TO ELVIRA

Sterban wrote an autobiography of his career, entitled "From Elvis to Elvira."

Sterban was the bass for J.D. Sumner and the Stamps Quartet, backing up Elvis Presley IN 1972, touring with “The King.”

“When William Lee Golden called and told me their bass was leaving and asked if I would be interested, I told him I was very interested,” Sterban said. “I didn’t hesitate. I saw the potential and believed it was the right thing for me to do.

“People asked me, ‘How could you leave Elvis to go with the Oak Ridge Boys?’ I told them I just felt it was best for me,” he continued. “I think history has proven that I made a pretty good decision.”

The story of the group’s signature song began 36 years ago when legendary “song plugger” Ronnie Gant heard a song in a Texas bar “and thought it would be a great song for the Oak Ridge Boys,” Sterban said. “We listened to it and thought, ‘Wow, this may be the song we’ve been looking for.’”

Sterban said the song had been recorded by other groups, “but we thought it might be something special.”

The song had the “oom-pa-pa-mow-mow” line in it, but it was record producer Ron Chancey’s idea to turn the line into a Sterban solo.

“I adapted it to my style and just had fun with it,” he added.

While on tour in 1981, the group decided to start previewing songs to see which ones to include on an upcoming album. In Spokane, Wash., they pulled out “Elvira” to perform live for the first time. The rest, as they say, is music history.

“We stuck it somewhere in the middle of the show,” Sterban said. “The place went crazy. We had to do a couple of encores of it and then, at the end of the show, we sang it again as an encore.

“We played it at every show after that and had the same reaction,” he continued. “We knew we had something special.”

“Elvira” is the Oak Ridge Boys’ most successful hit, earning them Country Music Association and Grammy awards for 1981.

After singing that song so many times over the past 35 years, most would probably never want to hear the song, much less sing it.

Not so in this case.

“I love singing that song,” Sterban said. “That song kind of changed our career. We found out that year that one song can change a fairly well-known country act into a household name.”

“You can be sure of one thing in life, if the Oak Ridge Boys are playing in your town, we’re going to sing ‘Elvira,’” Sterban said with a deep laugh. “That’s the law.”

After 35 years, “we still get the same reaction we did that first time,” Sterban said. “People stand up, dance and sing along. It’s the kind of song that makes people happy.”

He said the Oak Ridge Boys take pride in the fact that their show is “family friendly” and appeals to everyone from the grandparents down to the youngsters.

Sterban said fans will hear many of the group’s oldies-and-goldies, as well as several favorite Gospel songs and patriotic numbers.

“We always look forward to doing the best we can for our fans and making it a great night for everyone,” he said. “We just look forward to taking our music live on stage every day, and we are still having fun doing it.”

Since very few people would probably buy a ticket to see a group called the Oak Ridge Grumpy Old Men, the group seems to be stuck with the name the country has literally grown up knowing -- and they don’t seem too keen on sharing it with any newcomers.

Sterban will turn 74 on April 24. Allen joins him at that age five days later. Golden turned 78 this past Jan. 12. As noted earlier, Bonsall reaches the doorstep of his 70’s on May 18.

Sterban said none of the members are planning to retire anytime soon -- and there isn’t a second string of Oakies waiting in the wings.

“The longevity of this group of four guys is unique in the industry,” Sterban said. “One factor is that we have become the very best of friends.

“When we were younger, there were some differences,” he continued, “but now that we are older we realize that we can’t let petty things bother us. We are all different and bring different talents to the group that make us what we are. We all realize that and respect that. I am truthful when I say that this is just a special combination of guys and I believe it was ordained from on high that we exist as this group.”

Sterban said that if one of the four “had to leave or decided to retire, we might replace just one guy. Maybe. If there was any more than that, I think we’d just hang it up and say we’re done.”