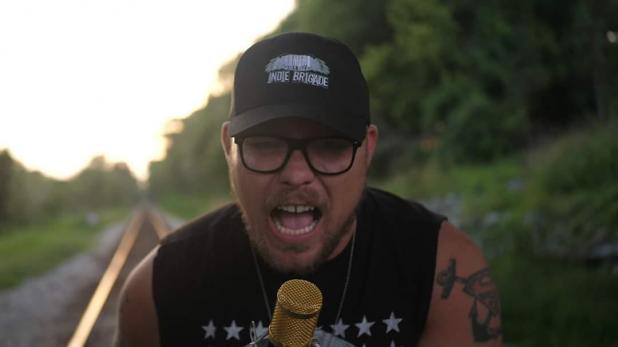 Jack Hunter belts out a song for a music video shortly after moving from New Orleans to his home parish of Avoyelles this summer.

When he was in high school, people called him "psycho," carved insults into the side of his vehicle and bullied him incessantly. He was called "loser" and was told "nobody cares about your silly home movies."

Since then, Cottonport native Jack Hunter has earned a reputation in the low-budget horror genre known as "found footage" film features. His "Paranoia Tapes" series is available on Amazon Prime and has become popular in that genre.

His first cinematic film, the anthology Horror Nights, was the No. 1 horror movie in the nation for the weekend of April 24-26. He has several more projects in planning and/or production.

He used his unpleasant experience in high school as a motivation to prove his tormentors wrong and to succeed with his "silly home movies."

Out of that drive came Southern Sykos Productions, which was based in New Orleans and is now an Avoyelles-based movie production company.

Yes, the boy who was accused of having a "hit list" because he used friends' names as characters in a horror-slasher short story has come home. The boy who was kicked out of a parochial school and then sent to the public school system's alternative school his first day in the public high school for being a threat to students is "on the loose."

Hunter moved back to Mansura in June and his Southern Sykos company moved with him.

While his home address will change, his online and social media addresses won't. More info on Hunter and his projects is available online at www.ITSTHESSP.com, Facebook at Southern Sykos Productions LLC and on Instagram at SSP_HORROR.

"I still get emails from people who ask if they were on my hit list," Hunter said. "I never had a hit list. The whole thing was stupid, but that one event changed my life. It is still what people think of when they hear my name."

He hopes his films will change that. Then again, the subject matter might just reaffirm his former classmates' opinion of his mental health.

He no longer lets what others think bother him.

Hunter took the insulting nickname "Psycho" and used it in his company's name, changing the spelling for both humorous and alliterative reasons.

He said "Paranoia Tapes" is filmed from a first-person perspective, in a style similar to "Blair Witch Project."

"'Found footage' film is an interesting genre and it is growing," Hunter said.

His latest film, "Horror Nights," is gathering good comments around the internet as being the first independent film to claim a top box office position in its first weekend of release.

Granted, it was in the middle of a nationwide lockdown that closed almost all cinemas in the country. Okay, it was the only horror movie released that weekend.

"Horror Nights" had its opening weekend in one theater, a drive-in in Ocala, Fla., which sold 265 tickets for a total gross of $2,415.

The film consists of 13 short features from seven filmmakers from around the world. Those elements are tied together with a wraparound story by Hunter. An Elvira-like hostess named Malvolia guides viewers through the various stories.

"People don't realize there are still 350 drive-in theaters in this country," Hunter said. "I have received requests from other drive-ins for my movies."

Hunter is very excited about an upcoming project, which could end up being filmed in Avoyelles Parish if circumstances fall in the right places.

The cinematic film -- which means it will look like a movie and not a camcorder video -- is based on his award-winning script "Faceless," which started its life in print as Hunter's "hit list" short story.

"Winter Haven" is a mystery-drama TV series that will go into production after "Faceless" is finished and released.

The cast of the series and "Faceless" will include actors from "La." and "L.A."
The Louisiana actors are Erica Weiss, Joey Alonzo, Tony Brown and Jade LaFont. The Los Angeles actors are Nangle, Gregory Blair, Charles Chubadala and Sam Mason. Mason is aso the director for both products.

"'Winter Haven' is not identical to 'Faceless,' but you could say they are in the same 'universe,'" Hunter said.

While "Faceless" will still be classified in the horror/slasher genre, Hunter said he sees it more as "an old-fashioned whodunnit where the audience tries to guess who the killer is."

Casting for that movie has begun, with veteran actor Jeremy Miller -- best known as the precocious and precious Ben Seaver on "Growing Pains" -- leading the bill.

MORE THAN A VICTIM

Hunter is more than a victim of bullies who decided to make movies one day and voila!

After graduating from Bunkie High School in 2004, he graduated from Texas Bible Institute in Columbus, Texas. After earning his college degree, he entered the U.S. Navy in 2006 and was deployed to the Persian Gulf aboard the amphibious assault ship USS Germantown in 2007-2008 to support the war effort in Iraq and the mission of the 11th Marine Expeditionary Unit.

He later learned filmcraft under the tutelage of horror film producer George C. Romero -- son of George A. Romero, the iconic creator of "Night of the Living Dead" and its sequels. The younger Romero continued the legacy of his father.

Hunter said his high school experience put a fire in his boiler, the Navy taught him how to take orders and apply discipline to whatever he does and Romero mentored him in how to create the kind of movies he has always loved.

"Everything I went through got me to the point where I am today," he noted.

In addition to that, Hunter has also appeared in small parts in films and has worked as a voice actor.

His other passion besides film is music.

"My first claim to being an entertainer was my singing career," Hunter said. "I've been singing since I could talk. Back in 2012, I self-published my country EP entitled 'Undiscovered.'"

The four-song extended play record was produced by a Las Vegas record producer.

"Since that first release, he and I have been on several songs that have gotten radio play around the world," Hunter said.

He said he and Jayton's latest EP, "Break-up 2 Make-Up," features several songs he and Jayton wrote over the past several years.

Jayton visited Avoyelles Parish in July "to write, record and shoot several music videos for our upcoming collaborative album entitled The Asylum," Hunter noted. "The album will be produced by Southern Sykos Productions and put out on every music streaming service there is.

Hunter said three music videos were shot at different locations in the parish and he recorded several music tracks.

"Some of the songs are streaming on iTunes under 'My Vinyl Asylum,'" he said. "We have just released the first video, a cover of One Republic's 'Apologize,' on YouTube."

Hunter said anyone wishing to be a part of future Southern Sykos' projects -- films, musicvideos or the proposed TV series -- can message him on the company's Facebook page.

NO PLACE FOR BULLIES

Hunter said he hopes high schools today are not the Neanderthal dens they were when he was at St. Joseph's and Bunkie High, but he fears they may be.

Schools are no place for bullies, he added.

"The school officials would say, 'That's just kids being kids,'" Hunter recalled. "They didn't see that the bullying was traumatizing the victims. I would hope that if that kind of behavior would happen today, the bullies would be locked up and sent somewhere."

Hunter is 35, single with two children from a past relationship -- 5-year-old son Jaxon and 3-year-old daughter Eryn. The children moved to Avoyelles with him. He said he wants them to know "that big things can happen to small-town people and that good can come from where I grew up."

That good, he said, outweighs the bad he endured as a teenager.

Most people are kind, caring and supportive of one another, Hunter said. Unfortunately, he added, "there are those who are narrow-minded, cruel, selfish and inconsiderate of others ."

He is looking forward to meeting as many of the first group as possible -- and maybe some in the second group.