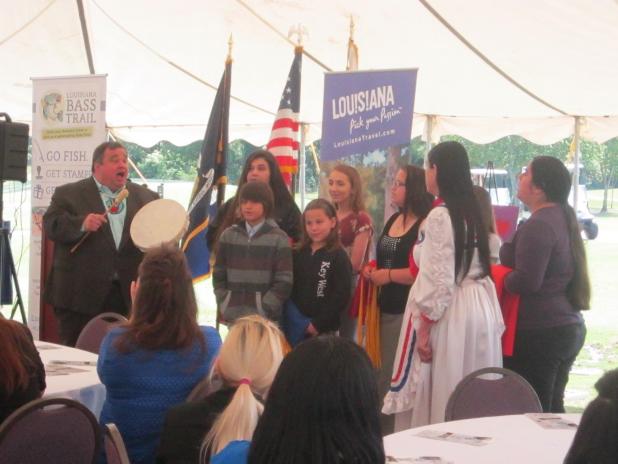 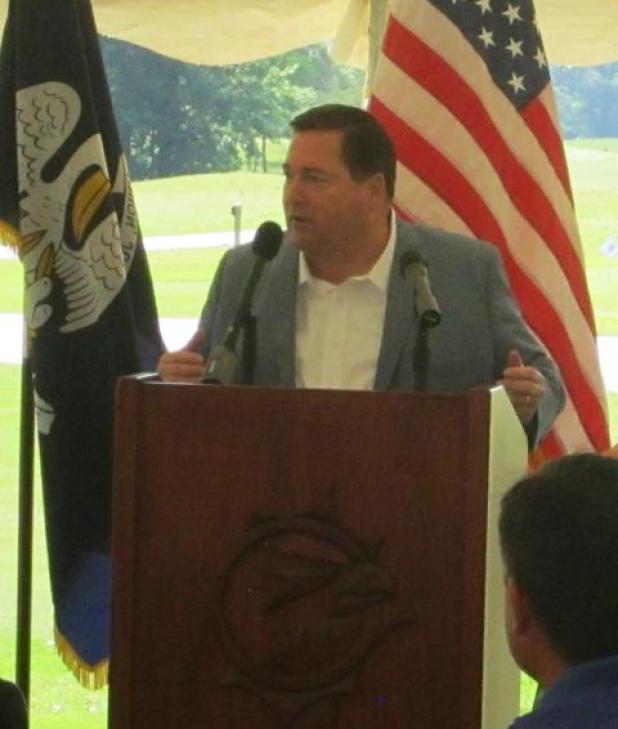 Lt. Gov. Billy Nungesser addresses a crowd of political, business and tribal officials about the importance of developing private/public partnerships in state parks and historic sites. Nungesser stopped at the Tunica-Biloxi Tribe's Tamahka Trails Golf Club on May 10 as part of his statewide promotion of National Tourism Week.{Photo by Raymond L. Daye}

Public/private partnerships in state parks is a major untapped resource that offers a promise to reopen Marksville’ s state parks and raise funds for the financially strapped state tourism office, Lt. Gov. Billy Nungesser said during a National Tourism Week stop in Marksville on May 10.

Nungesser said the state has already implemented such partnerships in a few state parks and is working on others. He said a Tourism Foundation will be established in which the proceeds from such endeavors will be deposited and can only be used to support the state’s culture, recreation and tourism efforts.

Nungesser was asked a few times by guests and guest speakers about the future of the prehistoric Indian park and museum, which is only open one day a week, and the undeveloped Civil War park at Fort DeRussy.

Nungesser said the partnership program and Tourism Foundation will benefit all state parks, museums, historic sites and recreation areas -- not just those with an active partnership that is contributing to the foundation fund.

“What I hope will happen is that the foundation will generate enough money that we will be able to open up everything 100 percent,” he said.

Nungesser said this area should look for possible business partners willing to locate in one of the state historic sites or recreation areas.

“It will take people caring enough to roll up their sleeves and do what needs to be done,” Nungesser said. “Avoyelles has too many rich assets here not to work hard to make the most of them.”

Nungesser told the a group of tourism, business, elected and Tunica-Biloxi tribal officials at the Tamahka Trails Golf Club, that the partnerships “will not compete with local businesses.”

He said the most recent partnership is of a man who decided to sell horse rides in a state park.

“It didn’t cost the state a penny, and we get $3 every time somebody rides one of those horses,” he said.

He said 46.7 million visitors came to Louisiana this past year, spending $16.8 billion and paying over $1 billion in taxes to state and local governments.

Nungesser said one tourism initiative is to “take the food, fun and festivities of Louisiana and wrap those around the abundant outdoor events in the state.”

He asked those in attendance to sign up to be “ambassadors” of the state by submitting descriptions and photos of local tourist attractions and events.

Nungesser said one of the state’s best resources in attracting tourists is its people.