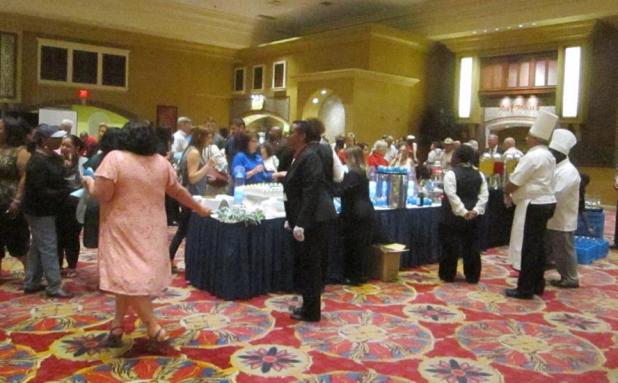 Employees of the Paragon Casino Resort serve cake and punch to those who attended a special 25th anniversary event on Monday. The Paragon opened on June 3, 1994 and is this area's largest employer. {Photo by Raymond L. Daye}

Paragon Casino Resort shared its “birthday” with a few hundred friends this past Monday (June 3).

Tunica-Biloxi Tribal Chairman Marshall Pierite welcomed the guests to share in this latest leg of “this amazing journey, not only for the Tunica-Biloxi Tribe and the Paragon, but for all of Central Louisiana.”

Several speakers remembered the late Earl Barbry Sr., the tribal chairman that led the Tunica-Biloxi through its lawsuit to recover the Tunica Treasure collection of archaeological artifacts, gaining federal recognition and developing the casino.

“His bold vision is responsible for us being here today,” Pierite noted.

Paragon General Manager Jody Madigan told the crowd at the celebration that more than 50 million people have visited the Marksville casino over the past 25 years.

Wilbert Carmouche, co-director of the Avoyelles Commission of Tourism, said the casino continues to be an “economic engine” for Avoyelles Parish.

“How fortunate we are in Avoyelles Parish to have the Tunica-Biloxi Tribe with a vision to undertake such an enterprise,” Carmouche said.

Key dates included the formal union of the Tunica in Marksville and the Biloxi-Choctaw in the Woodworth area in 1924; the first delegation to Washington, D.C., to seek federal recognition in 1938; the discovery of the Tunica Treasure near Angola in 1968 and the subsequent 10-year lawsuit to recover the nation’s largest collection of Native American artifacts; federal recognition in 1981; and the construction of the tribe’s first cultural center and museum in 1989.

Pierite said the event was a good way for the tribe to interact with the non-tribal community to celebrate the positive impact the resort complex has had and will continue to have on the local economy.

Marksville Mayor John Lemoine said the casino has had “a great impact on Marksville with the jobs it has created and bringing people to the city.

“It has put Marksville on the map,” Lemoine added.