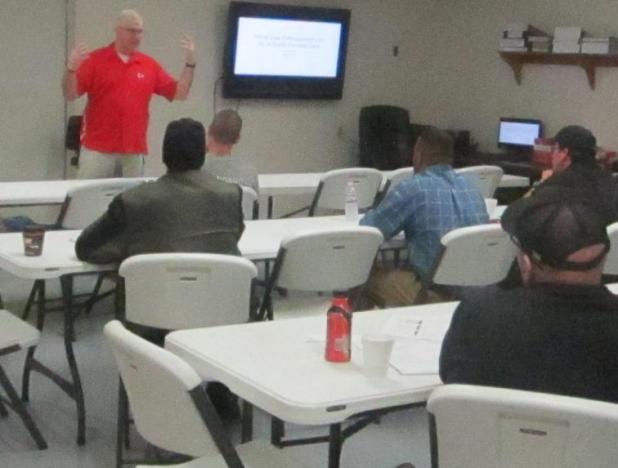 Police academies do a good job of training law enforcement officers in how to treat suspects of a crime. Unfortunately, there is less attention paid in how a police officer should handle the victim of a crime.

That is particularly true in offenses such as domestic abuse and sexual assault, an Attorney General’s Office representative said.

“We obtained a grant to provide training to patrol officers on how to deal with domestic violence, sexual assault and human trafficking victims,” Monica Taylor, one of the workshop presenters, noted.

“The patrol officer is often the first one on the scene of one of these crimes, and it is important that they have all the tools they need to handle the situation appropriately,” she added.

Taylor said it is important that the first law enforcement officer the victim sees is able to develop a good interaction before the investigating detectives arrive.

“Detectives receive additional, in-depth and intense training,” Taylor said. She said the detectives will be able to handle the situation, but what happens between the initial contact and the start of the detective’s investigation phase is critical.

Taylor said the “Protect Louisiana’s Families” training program is funded by a federal Violence Against Women Act (VAWA) grant through the Louisiana Commission on Law Enforcement.

“We receive a grant every year,” she said.

The Attorney General’s Office will apply for the VAWA grant again next year, possibly focusing more on training specifically for sexual assault cases.

“We try to keep the training fresh and new,” Taylor said, noting that nobody wants to sit through the same exact class they’ve already had.

“We also try to keep up with national trends and incorporate that in the local classes,” she said. “Small police departments can’t afford to send their officers to national training courses.”

The two Marksville work shops were part of a 12-site, 24-session series of training classes. About 10 agencies, five in each session, took advantage of the free training at APSO.

“We are going to the smaller locations rather than to the larger municipalities,” Taylor said. “In the past, the smaller departments would have to travel to somewhere like Alexandria for training.

“It is important that we meet law enforcement officers where they are -- both physically by their location, but also in their level of knowledge.”

Taylor’s portion of the workshop dealt with the “neuro-biology of trauma.”

That is one of those big university words which is a lot simpler to explain than it is to pronounce.

Simply put it means “why people do what they do.”

“A domestic violence call is one of the two most dangerous situations for a police officer,” Taylor said. “The other is a traffic stop.”

A common problem a police officer faces after arriving at the scene of a domestic dispute is that the person he is trying to help has switched sides.

Now he has two angry, adrenaline-pumped individuals who have united against a common enemy -- the police officer.

“In this training, we teach the officers why the victim may become violent against the officer,” Taylor said.

If the police officer is forewarned that this might happen, and armed with a little bit of scientific information as to why it happens, he is better prepared to deal with the problem if it does happen.

In a domestic abuse situation, the victim -- usually the woman in the relationship, but not always -- may attack the person confronting her partner “because her brain is telling her it is the best way to protect herself,” Taylor said.

Unfortunately for many women in an abusive relationship, if the police intervene “a lot of times the partner will use it against her the next time he beats her, and it could be worse because he blames her,” Taylor said.

Other simple tips the training teaches is for the patrol officer to “start by believing the victim.

“Of course, you have to follow the evidence and if it proves otherwise, you go where the evidence takes you,” Taylor said, “but you don’t lose anything by believing the victim when you first arrive at the scene.”

That acceptance of the victim’s account also helps to establish a relationship of trust that will make the detective’s job a lot easier than if he has to try to undo an unpleasant first encounter.

Another thing officers are taught is not to expect a “normal reaction” from the victim and jump to a wrong conclusion when the victim reacts differently than expected.

“There is no “normal response” because the victim is in an abnormal event,” Taylor said. “The way you think you would react is not necessarily the way someone else would.”

That led to reminding police officers -- and anyone else -- to be careful about what they say at work or to friends in social gatherings.

“For example, if you tell a friend ‘I’d never let someone hit me like that,’ you may not know that she is in an abusive relationship and your comments might keep her from reporting because she feels she would be judged for not doing something sooner.”

Taylor said Attorney General Jeff Landry is a former police officer who has been in the same situations as the patrol officers in the training classes.

“The attorney general is very committed to educating law enforcement and prosecutors on how to deal with victims of domestic violence and sexual assault,” she said. “We want to provide them with all the tools they need to protect the public they serve.”