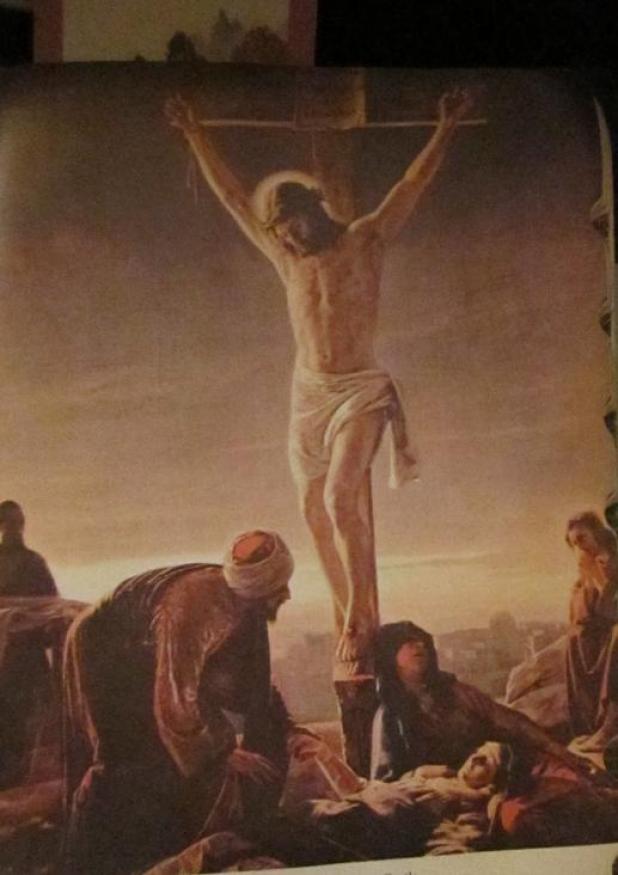 Friends and family mourn at the feet of Jesus of Nazareth earlier today. The sign above his head reads “King of the Jews,” a reference to the charge that the Nazarene, or his followers, sought to overthrow Roman rule and re-establish the Throne of David. {Artwork by Carl Bloch (1834-1890)

{Editor’s Note: This series depicts how the events of Jesus Christ’s last week in Jerusalem could have been reported by a newspaper. It consists of eight articles, beginning with Palm Sunday and ending with Resurrection Sunday. It is based on the accounts found in the New Testament books of Matthew, Mark, Luke and John but also includes historical information not included in the Gospels. This is the sixth, for Good Friday.}

JERUSALEM -- An innocent man died on Golgotha today -- a teacher whose only crime was refusing to deny what others said about him.

Even Gov. Pontius Pilate, who pronounced the death sentence, proclaimed him innocent of any wrongdoing. The execution was allowed after a crowd demanded the man’s death.

Jesus bar-Joseph of Nazareth was a 33-year-old carpenter who left his lumber, tools, family and friends in Galilee to spread a message of repentance, certain judgment and love for even one’s enemies.

This man who regularly drew thousands to hear him speak and see him perform miraculous healings died virtually alone, with only a handful of friends and family standing near the Roman cross where he was nailed.

The sun was inexplicably hidden from about noon until 3 p.m. There were reports throughout the city of dead people rising from their graves and walking the streets of Jerusalem.

An earthquake struck at about the same time, reportedly splitting the Temple veil from top to bottom.

When this man died at 3 p.m. today, more than just a healer and philosopher died. A grassroots religious doctrine also died with him.

One may well ask where are the brave Galileans who sat around their master as he taught at the Temple? Will they carry on his message now that he is dead? They have either melted into the masses in Jerusalem or disappeared into the deserts of Judea, Samaria, Perea and Galilee.

Jesus’ body was claimed by two members of the Sanhedrin, Joseph of Arimathea and Nicodemus. The body was taken to Joseph’s tomb.

A Roman guard was placed around the sepulcher at the request of the priests due to concern that Jesus’ statement that he would “raise the temple in three days” was a promise to rise from the dead in three days.

The priests said they don’t want the body stolen and then an empty tomb be used as proof that Jesus was the messiah.

Jesus was arrested by agents of Caiphas last night in the Gethsemane garden outside of town. Judas Iscariot, one of Jesus’ 12 closest associates, led the delegation to the garden a few hours after the group’s Passover feast of unleavened bread.

Iscariot’s body was found today. He apparently hanged himself early this morning, shortly after the Sanhedrin condemned Jesus of blasphemy late last night.

The Nazarene teacher/healer offered no resistance at his arrest, even delivering one more verbal jab at his enemies by asking why they came secretly with weapons to take him at night rather than during the day when he was teaching publicly in the city.

The reason was clear. Public opinion was in favor of this Nazarene who cast society’s elite as villains in his stories and openly criticized their manner of religious observances.

One of his followers, believed to be the one called Simon Peter bar-Jonas, drew a sword and cut off the ear of a servant named Malchus. Jesus healed the boy’s severed ear.

In a life characterized by miracles and healing, and a message exhorting people to love their enemies, it seems his last miracle was to help one of those who came to carry him to his death.

Annas, Caiphas and the Sanhedrin questioned Jesus last night, found him guilty of blasphemy and held him until sunrise today. A delegation took the carpenter-turned-prophet to Pilate and accused him of such treasonous acts as declaring himself to be the king of the Jews and “stirring up the people” against Roman rule.

Pilate noted that Jesus, as a Galilean, should come under the jurisdiction of Herod, who rules that province. As luck would have it, Herod is in Jerusalem for the Passover and seemed pleased to meet the famous Nazarene.

Herod asked many questions, but Jesus would not speak to him.

Herod had ordered the beheading of Jesus’ cousin, John the Baptist, a year or so ago. It could be that the Galilean had determined not to speak to the man responsible for his cousin’s death.

Herod’s men mockingly declared Jesus a king, put a fine robe on him and sent him back to Pilate with a finding of no-fault.

Pilate once again attempted to persuade the Jewish leaders to drop their call for a death sentence, but they insisted. Pilate formally declared Jesus to be innocent of any crime against Rome, but Caiphas and his company persisted.

At one point, one of the group threatened to send a dispatch to Caesar stating that Pilate refuses to take action against traitors.

In what seemed like a masterful political maneuver, Pilate agreed to condemn Jesus to death, but then added that he had decided to release a condemned criminal in honor of the Jewish Passover celebrating the Israelites’ deliverance from Egypt about 1,300 years ago.

Given a choice of four men -- the peaceful teacher/healer from Nazareth, notorious terrorist/murderer Barabbas and two career thieves -- Pilate reasoned the crowd would call for Jesus’ release.

In a sudden reversal of public opinion, a crowd that hailed this man “king” less than a week ago called instead for Barabbas to be freed and for Jesus of Nazareth to be crucified in his place.

Pilate tried once more to avoid having to carry through with the promised execution. He ordered Jesus to be severely beaten in view of the crowd, hoping this would satisfy their sense of justice.

After being kicked around and mocked by Roman soldiers, including having a thorn of crowns pushed down into his forehead, and brutally whipped to a point where he could hardly stand, Jesus was given his cross and forced to walk to the execution site of Golgotha, also called Calvary.

Due to the beating and lack of sleep, he fell beneath the weight of his cross. Soldiers grabbed a Cyrenian named Simon and forced him to carry the cross to Golgotha.

At about 9 a.m., Jesus was nailed to a cross with spikes through his wrists and feet. He refused a painkilling concoction of wine and gall and said something like, “Father, forgive them. They do not know what they are doing.”

Roman soldiers divided his clothing among them. One soldier won the robe intact in a game of chance.

Those around the crosses taunted him, calling on him to use his purported supernatural powers to come down from the cross.

One of the two thieves crucified with him also mockingly asked him to save himself and them. The other thief rebuked his partner in crime, saying they deserved their penalty but Jesus did not.

He asked Jesus to “remember me when you come into your kingdom.”

The Galilean replied, “Today you will be with me in Paradise.”

A young man and a woman stood near the cross, mourning the slow death they were witnessing. It was later determined the woman was Jesus’ mother, Mary, and the young man was one of his followers, John bar-Zebedee.

Jesus told his mother to consider John as her son and instructed John to take care of Mary as if she were his own mother.

Shortly after that, the sky darkened.

Close to 3 p.m., Jesus once again spoke, quoting a psalm that apparently represented his feelings at that moment: “My God, my God, why have you forsaken me?”

His next words were, “I’m thirsty,” to which soldiers responded by offering up a sponge soaked in the painkilling vinegar, which he refused to drink.

His last words were, “It is finished. Father, into your hands I commend my spirit.”

A soldier came by to break the criminals’ legs to speed up the suffocation caused by crucifixion, but found the carpenter already dead.

He thrust a spear upward into the body’s side, apparently piercing the heart, to ensure the condemned man was dead.

The centurion in charge of the death squad was overheard to remark, “Truly this was the son of God.”