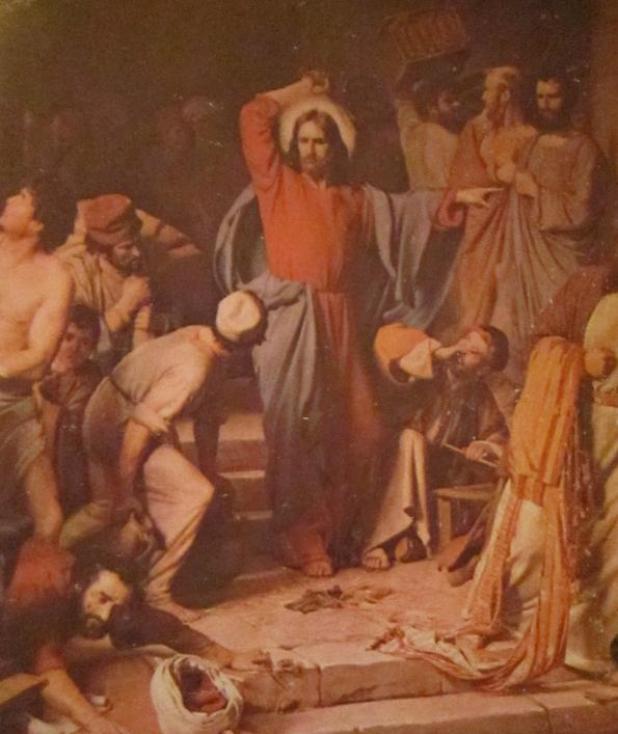 'DEN OF THIEVES'
This was the scene in Temple Square yesterday when Jesus of Nazareth made a whip and drove merchants and money-changers out of the area, saying the Temple should be a place of worship and not commerce. His show of righteous anger has made him even more unpopular with Jewish religious leaders than he was before he arrived to a throng proclaiming him to be the Israel’s promised “messiah.” {Artwork by Carl Bloch (1834-1890)}

{Editor’s Note: This series depicts how the events of Jesus Christ’s last week in Jerusalem could have been reported by a newspaper. It consists of eight articles, beginning with Palm Sunday and ending with Resurrection Sunday. It is based on the accounts found in the New Testament books of Matthew, Mark, Luke and John but also includes historical information not included in the Gospels. This is the second in that series.}

JERUSALEM -- After an exciting clash between a charismatic carpenter and Temple merchants yesterday, the city returned to calm today -- or at least as calm as a city can be when it is in the throes of doubling or even tripling its population.

Jews from throughout the region are streaming to Jerusalem for the Passover. Among those taking the trip are Jesus bar-Joseph of Nazareth and a small band of followers of his unorthodox, some say “dangerous,” teachings.

Jesus entered the city yesterday amid much fanfare and with some proclaiming him to be the promised “messiah” and new king of the Israelites.

He forcibly removed the long-established merchants and money-changer from the Temple grounds, even though the priests and religious leaders allowed such business activity there.

Most of those who gathered to hear him today seemed genuinely interested in hearing what this unusual prophet from Nazareth had to say.

Scattered among the spectators were chief priests, Pharisees, Sadducees, Herodians and others who periodically asked questions aimed at stumping Jesus or leading him into making a misstatement that might turn the crowd against him.

A spokesman for the chief priests asked Jesus “by what authority” he taught, God’s or man’s.

Jesus said he would answer that question if the priests would answer his question to them, which was, “By what authority did John baptize? By Heaven’s or by men’s?”

After a quick huddle in which the priests weighed the possible reactions to their answer, they said, “We cannot tell.”

Jesus then said he could not tell them by what authority he did what he did.

One of the group later said the priests realized that if they had said John’s teachings were by authority of Heaven, Jesus would have embarrassed them by asking why then they did not believe what John had said.

If they had said John’s ministry was by man’s authority only, the public would have turned against them because many consider the martyred baptizer to be a modern-day Elijah.

Such back-and-forth between the Galileans and the religious authorities has become a characteristic trait of Jesus’ public speaking appearances.

The fact that religious leaders have placed a bounty on the carpenter-prophet’s head has only heightened tensions when the two groups meet in public.

The maneuver to invoke John’s presence into the fray has special significance since Jesus is a cousin of John’s and was baptized by the fiery prophet about three years ago.

Eyewitnesses to that event claim that John confirmed Jesus as the “Lamb of God” and that a voice from the skies proclaimed the carpenter as “My Son in whom I am well pleased.”

The Nazarene and his 12 associates left the city prior to sunset but indicated they would resume teaching in the Temple tomorrow.