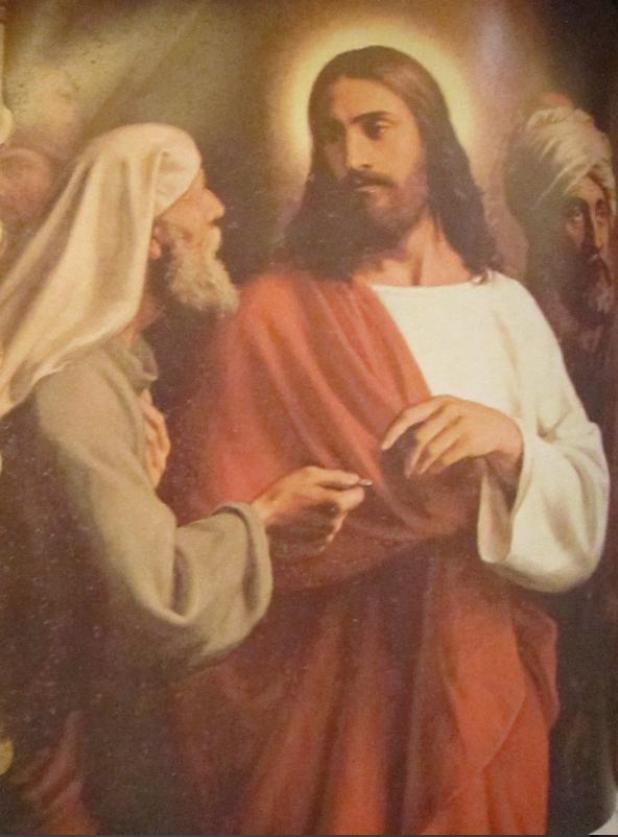 "RENDER TO CAESAR ..."
“Render to Caesar what is Caesar’s, and to God what is God’s,” healer/teacher Jesus bar-Joseph told a crowd in Temple Square earlier this week. The Nazarene carpenter continued teaching, and verbally sparring with religious leaders, at the Temple today. {Artwork by Anton Dorph (1831-1914)}

8 Days in Jerusalem: Day 3 - Battle of wits and words heats up

{Editor’s Note: This series depicts how the events of Jesus Christ’s last week in Jerusalem could have been reported by a newspaper. It consists of eight articles, beginning with Palm Sunday and ending with Resurrection Sunday. It is based on the accounts found in the New Testament books of Matthew, Mark, Luke and John but also includes historical information not included in the Gospels. This is the third article.}

JERUSALEM -- The battle of words and wits between Jewish religious leaders and a Nazarene carpenter heated up today with Jesus bar-Joseph scoring a decisive victory by most accounts.

The usually rival Jewish sects of Pharisees and Sadducees formed an alliance during brisk question-and-answer sessions with the Galilean in the past few days. Jesus deftly answered their questions and then stunned them with questions of his own which they could not, or would not, answer.

Jesus has been teaching religious lessons and philosophy in the Jewish Temple since earlier this week, when he arrived in town amid great fanfare. The crowds have been generally friendly, although he rankled some by violently forcing money-changers and merchants out of the Temple area.

Most of those who have an opinion on the issue seem to respect the 33-year-old roving rabbi. Many claim to have witnessed him miraculously healing the blind, lame and leprous of this and surrounding communities.

The most notable “miracle” was the recent incident in Bethany in which Jesus reportedly revived a man who had been dead for four days.

At one point in the verbal sparring matches today, Pharisees and Sadducees made a move to physically assault Jesus. They retreated after realizing the crowd was on the Nazarene’s side.

In an attempt to force the Galilean teacher to either alienate the anti-Roman Jews or to commit an act of treason against Rome, a Pharisee asked if it should be lawful to give tribute to Caesar?

Jesus turned on the would-be tricksters, calling them “hypocrites.”

He called for a Roman penny and then asked, “Whose image is on the coin?”

Jesus closed the debate by saying, “Render then to Caesar what is Caesar’s and to God what is God’s.”

Most observers interpreted that to mean that Rome is due a monetary tax as the ruling government, but God as creator of all is entitled to man’s faithfulness and worship.

The use of the word “image” was considered significant in that comparison.

Caesar’s image is struck on the coins of Rome. However, Jewish scripture says that God’s image is imprinted on mankind -- that man was created in the image of God.

Jesus’ answer then was to give your money to the government, but give yourselves to God.

The Pharisees, failing in their ruse, walked away.

A group of Sadducees then took up the chase, trying to ensnare Jesus in a sticky doctrinal issue. The Sadducee sect does not believe in a final resurrection of the dead, but the Pharisees do.

In an attempt to make Jesus choose sides on this controversial point, the Sadducees posed the following situation:

A woman is married and widowed seven times and finally dies. Whose wife will she be in Heaven after she and her seven husbands are resurrected from the dead?

Jesus told the Sadducees that they do not understand the Scriptures or the ways of God. He said there will be no marriages in Heaven.

Concerning the doctrine of the resurrection, Jesus said the Scriptures state God told Moses, “I am the God of Abraham, Isaac and Jacob.” He then added, “God is the God of the living, not the dead.”

The point was that those three patriarchs must then be “alive” in a resurrected state if God still claims to be their God.

The Sadducees then retreated and the Pharisees stepped up once again and asked Jesus to tell them which is the greatest commandment in the Mosaic Law.

“Love the Lord your God with all your heart and all your soul and with all your mind,” Jesus said without hesitating. He then added a second commandment to “love your neighbor as yourself. On these two commandments rest all of the law and prophets.”

The nomadic Nazarene then took the opportunity to ask the Pharisees a tricky question of his own.

“Whose son will the messiah be,” he asked.

“Why then did David call him ‘Lord’ in one of the psalms, when he said ‘The Lord said to my Lord, sit on the right-hand side until I make your enemies your footstool?’ How can David call his own son ‘Lord?’”

They were unable to answer and stopped asking questions.

Jesus then launched a fiery tirade against the Pharisees and others of the religious hierarchy, calling them hypocrites who make a show of their religion and piety but are not truly righteous.

He said the Pharisees are “blind” to the true meaning of the Scriptures’ teachings because they concentrate too much on the literal interpretation and application of the Jewish religious laws but neglect the purpose and higher meaning behind those laws.

As an example he noted how some Pharisees meticulously measure out exactly a 10th of their possessions to give to God but ignore scriptural teachings to show compassion for others.

“You serpents. A generation of vipers,” Jesus said. “How can you escape the damnation of Hell?

“I send prophets and wise men and scribes, and you kill and crucify some and scourge others in the synagogues and persecute them from city to city,” he added.

After finishing that verbal attack, Jesus left the Temple and walked with his 12 closest followers toward the Mount of Olives outside of the city.