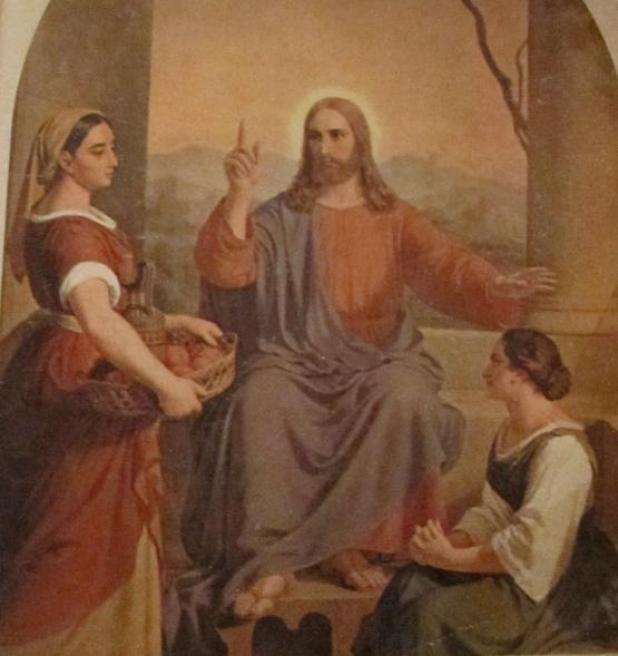 WITH FRIENDS IN BETHANY

Jesus of Nazareth talks with two sisters -- Martha (left) and Mary (right) in Bethany today. He took a day off from teaching in Temple Square, where he had several run-ins with the Pharisees and Sadducees who disagree with his religious philosophies. {Artwork by Frederik Ludvig Storch (1805-1883)}

{Editor’s Note: This series depicts how the events of Jesus Christ’s last week in Jerusalem could have been reported by a newspaper. It consists of eight articles, beginning with Palm Sunday and ending with Resurrection Sunday. It is based on the accounts found in the New Testament books of Matthew, Mark, Luke and John but also includes historical information not included in the Gospels. This is the fourth article.}

JERUSALEM -- Jews from every province in the region continue to stream into Jerusalem in preparation for Passover, which begins at sunset tomorrow. The city’s population has at least doubled and possibly tripled in the past week.

Among the various dignitaries in town is Herod, ruler of the northern and eastern provinces of this region. He is the closest thing to an Israelite king.

Judea’s Gov. Pontius Pilate has temporarily moved his seat of government from Caesarea for the holy days in hopes that his presence will discourage any recurrence of last month’s uprising in which at least one Roman was killed.

The man condemned for that murder, a habitual criminal named Barabbas, will be executed in two days on Golgotha -- a hill outside of town. There are two thieves also scheduled to be crucified on the hill at that time.

It was quieter around the Temple today than it was earlier this week. The traveling teacher, Jesus of Nazareth, and his followers apparently remained in Bethany today rather than return to Jerusalem.

The group is expected to celebrate the Passover meal somewhere in town tomorrow, but the place is being kept secret.

The Galileans are at odds with the Pharisees and other religious authorities, who have offered a reward for anyone able to deliver Jesus into their hands.

Jesus and his followers arrived amid great commotion at the beginning of the week. Some in the crowd proclaimed the Nazarene to be the promised messiah.

Jesus taught in Temple Square earlier this week. His attacks on the religious establishment, usually couched in stories and parables, were more pointed and direct this week than they have been in the past three years of public ministry.

Although the Pharisees would like nothing better than to lock him away, they have been too wary of the crowd to move against him.

The crowd that gathered to hear more of his wit and wisdom today had to go home disappointed.

For those unaware of the history behind Passover, here is a brief recounting of those events which occurred more than 1,300 years ago while the Israelites were captives in Egypt.

The children of Israel had been in Egypt for 430 years when the god Jehovah chose Moses to lead them out of slavery.

God appeared to Moses in a burning bush that was not consumed by the flame and told him to go to Egypt and tell the pharaoh to free the Israelites.

Moses and his brother Aaron petitioned the Egyptian pharaoh, but he refused. God sent a plague on the land each time Moses’ request was denied.

After nine plagues and nine refusals, God sent the “Death Angel” to kill the firstborn of every household not under God’s protection.

To ensure that protection, the Israelites were instructed to kill a lamb and place the blood on the lintels and doorposts of their homes. The angel of death “passed over” the houses under the lamb’s blood protection.

Among those who died that night was the pharaoh’s son. The pharaoh relented and sent word that the Israelites were to leave immediately. Pharaoh later sent his army after the Israelites.

God parted the Red Sea and allowed the fleeing Hebrews to cross over on dry land, but closed the sea on the pursuing Egyptians.

The holiday has a dual celebration -- of the “passing over” of the Death Angel in Egypt and of the nation of Israel “passing over” from slavery to freedom.

There are certain sects active in the region today that compare the Hebrews’ captivity in Egypt with their modern descendants’ status under Roman rule.

There is a Passover prayer recited during this time which includes the phrase, “This year we are slaves; next year we may be free.”

It would be wise to once again recount the fate of recent insurrectionists, such as the unfortunate Barabbas, before turning this religious observance into a political call to arms.