JESUS OF NAZARETH OBSERVES PASSOVER
Jesus bar-Joseph of Nazareth speaks with his closest disciples during the Passover meal earlier today. The disciple leaving the room is believed to be Judas Iscariot, who led a mob to the garden at Gethsemane later to arrest the Nazarene healer. {Artwork by Carl Bloch (1834-1890)} 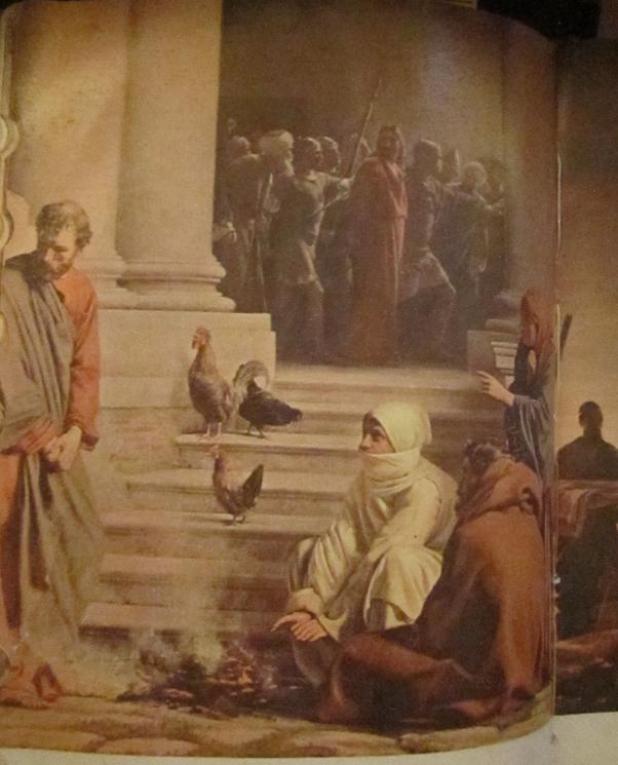 Jesus of Nazareth (back, center) is led away during his trial at Caiphas' house after sundown today (fifth day of the week). The man in the left front corner is a Galilean many thought is one of the philosopher/healer's disciples. However, he said he did not know the Nazarene rabbi. {{Artwork by Carl Bloch (1834-1890)}

{Editor’s Note: This series depicts how the events of Jesus Christ’s last week in Jerusalem could have been reported by a newspaper. It consists of eight articles, beginning with Palm Sunday and ending with Resurrection Sunday. It is based on the accounts found in the New Testament books of Matthew, Mark, Luke and John but also includes historical information not included in the Gospels. This is the fifth article in the series.}

JERUSALEM -- Jesus of Nazareth was arrested in a garden outside of town tonight and then tried and convicted of blasphemy by a religious court.

Caiphas, the high priest, and others are expected to bring the Galilean philosopher to Gov. Pontius Pilate tomorrow morning to urge a death sentence against the man on grounds of treason against Caesar.

Insiders in Pilate’s court say that is unlikely, given the lack of evidence to substantiate the charge. Pilate is known for his cruelty and harsh governing tactics, but he is also noted for his strict adherence to the Roman code of justice.

The carpenter-turned-rabbi was arrested in a garden called Gethsemane, just outside of the city walls.

One of Jesus’ most trusted followers, Judas Iscariot, turned him in and collected the reward of 30 silver pieces that had been placed on the Nazarene’s head.

Iscariot led a group of soldiers from the Jewish chief priests to the garden refuge -- apparently a spot used often by the traveling philosopher and his followers. Iscariot walked up to the man in the garden, called out in a loud voice, “Hail, master,” and kissed him on the cheek.

When the armed band rushed forward to apprehend Jesus, he asked why they chose to come after him late at night with swords and spears rather than openly arresting him during the day when he was sitting in Temple Square earlier this week.

One of Jesus’ followers swung a sword at a servant, missing the mark but severing the young man’s ear. Jesus told his defender to put away the sword and then miraculously reconnected the servant’s severed ear.

A man resembling the sword-bearer was seen at Caiphas’ house while Jesus was being interrogated there. When he was asked if he was one of Jesus’ followers, he vehemently denied any association with the Nazarene carpenter. He spoke in a distinctive Galilean accent, but still insisted he did not know the Nazarene rabbi.

Not much is known of Iscariot.

Of Jesus’ 12 closest followers, he is believed to be the lone non-Galilean. He was the group’s treasurer and some associates of the band said they had suspected he was embezzling funds for his own purposes.

There was a public dispute between Iscariot and Jesus late last week. When a woman in Bethany anointed Jesus’ feet with oil, Iscariot criticized her for wasting the ointment rather than selling it and using the money to help the poor. Jesus rebuked him, saying it was proper for her to use the oil to anoint his feet.

The balm would have fetched about 300 pence on the open market.

Iscariot could not be reached for comment on his reasons for turning his leader over to his enemies.

The Jewish leaders claim Jesus is guilty of blasphemy because he has allegedly said he is the son of God and that he and God are one and the same. Others say such comments are symbolic and are not actual declarations of divinity.

There is a growing number of people in this province and the surrounding area who believe Jesus is the “messiah,” or Jewish deliverer who will rescue them from Roman rule and restore the nation to the former greatness it enjoyed under legendary kings David and Solomon.

Blasphemy against the Jewish god Jehovah is not a capital offense under Roman law. However, the chief priests also claim Jesus has committed treason against Caesar, which is punishable by death.

The prescribed method of execution for a non-Roman convicted of that crime is crucifixion. There are crucifixions of two thieves and a murderer/traitor set for 9 a.m. tomorrow on “Skull Hill” just outside of town.

Several witnesses have been lined up to testify before Pilate that they heard Jesus proclaim himself to be the king of the Jews and that he has refused to pay tribute to Caesar.

If true, those offenses could possibly merit a death sentence.

It is common knowledge that Jesus has never made such a public proclamation of his “kinghood,” although some of his followers have. Also, just a few days ago he specifically responded to a tax-related question by saying, “Render to Caesar what is Caesar’s and to God what is God’s,” a statement which seems to accept the authority of Rome over the Jews and the responsibility of Jews to pay taxes to that government.

Jesus had been teaching in the Temple earlier this week, but did not appear yesterday or today.

He could appear at the Temple tomorrow, despite getting very little sleep tonight, to deliver his version of what happened at the garden and in his trials.