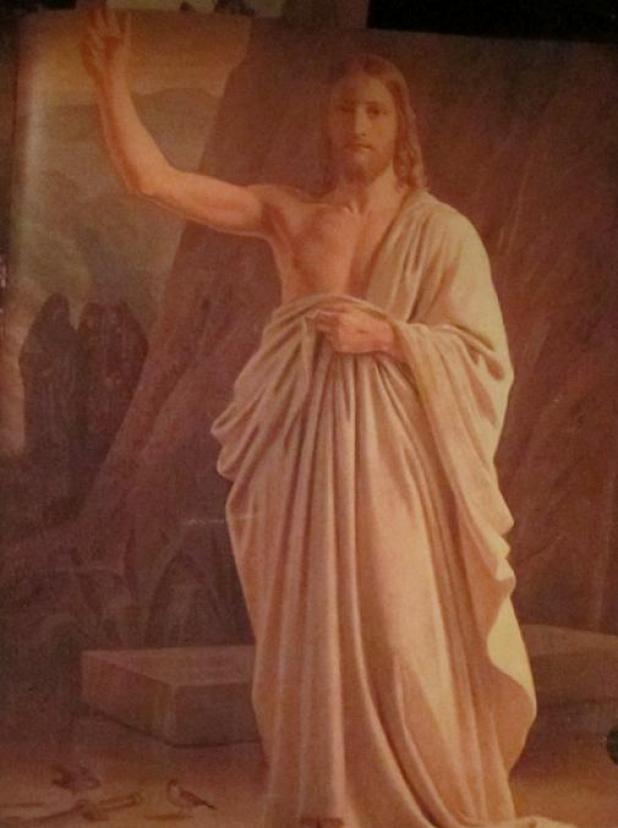 IS THAT JESUS?
A man said to be Jesus of Nazareth stands near the open entrance of the borrowed tomb where the noted healer had been placed after being executed two days ago. Jesus’ body was missing when officials went to the scene this morning after rumors were spreading that the Nazarene carpenter had risen from the dead. {Artwork by Constantin Hansen (1804-1880)}

{Editor’s Note: This series depicts how the events of Jesus Christ’s last week in Jerusalem could have been reported by a newspaper. It consists of eight articles, beginning with Palm Sunday and ending with Resurrection Sunday. It is based on the accounts found in the New Testament books of Matthew, Mark, Luke and John but also includes historical information not included in the Gospels. This is the final article in the series, marking Easter -- or Resurrection -- Sunday.}

JERUSALEM -- The body of Jesus of Nazareth was stolen from his tomb before dawn today, a spokesman for High Priest Caiphas said.

A squad of Roman soldiers had been placed around the tomb, located near the execution hill of Golgotha. The soldiers told their superiors they fell asleep early Sunday morning and did not wake up until daybreak.

Gov. Pontius Pilate posted the guard at the request of Caiphas and others who said Jesus had promised to rise from the grave within three days after his death.

It is not known what, if any, punishment will be handed down against the soldiers for failure of duty. Prior to the recent execution of the Nazarene carpenter, it would have been a sure bet that Pilate would have “rewarded” these sleep-loving soldiers with an eternal sleep.

Such an act would have been in keeping with his sense of humor and sense of justice, evidenced a year ago when he mingled the blood of another group of obstinate Galileans with that of their animal sacrifices. However, the governor has seemed more quiet-natured and subdued since pronouncing the death sentence on Jesus. Some say he a different man than he was prior to this Passover's events.

The Jewish authorities said a small earthquake -- an afershock from the quake that hit the city two days ago -- moved the heavy stone from in front of the tomb. There were no other reports of damage from the tremor.

Officials said followers of the Nazarene healer/philosopher had apparently been watching the tomb since Jesus’ execution, waiting for an opportunity to work their mischief.

The sleeping guards and fortuitous quake provided that opportunity.

Others who accompanied Jesus during his three-year ministry point out the “lucky break” theory of the Pharisees and others takes more “faith” to believe than those who say Jesus rose from the dead.

Word of the resurrection spread throughout the city today. Several small groups made trips to the tomb during the first few hours of daylight.

SPOKE TO JESUS
Some women who had gone to the tomb just at daybreak claim to have spoken to Jesus in person. Others said they spoke with angels -- messengers of the Jewish god Jehovah, appearing in human form -- who told them the Nazarene had risen as was prophesied.

Followers of the Galilean carpenter are still keeping a low profile in the wake of Jesus’ execution. They understandably fear that a political force able to maneuver the death of their leader would have little problem nailing his underlings to a Roman cross should they continue his unorthodox teachings.

They saw how Pilate, with authority over life and death in this province, was unable to stop the execution.

The news of the empty tomb may temporarily bolster the ranks of the Jesusites -- a nickname for the Galilean's followers for lack of a better name to call them.

Pharisees and the chief priests are busy spreading their version of the day’s events -- the body was stolen, the guards were asleep, the earthquake moved the large stone but didn’t wake up the guards, etc.

If it is true that this desert-roaming rabbi has risen from the dead, it would be of inestimable importance.

Such a resurrection would be evidence that this direct descendant of King David could be the promised messiah of the Jewish nation. That could spark a popular uprising against the Roman occupation forces.

If it is a hoax by the Zealots or followers of the Nazarene to instigate such a rebellion, it is important that it be exposed before misguided patriots shed their blood in a false cause that could bring destruction on Jerusalem and the Jewish people.

Rome could very well punish such a rebellion by the Israelites by destroying their sacred Temple and driving them from their “Promised Land.”