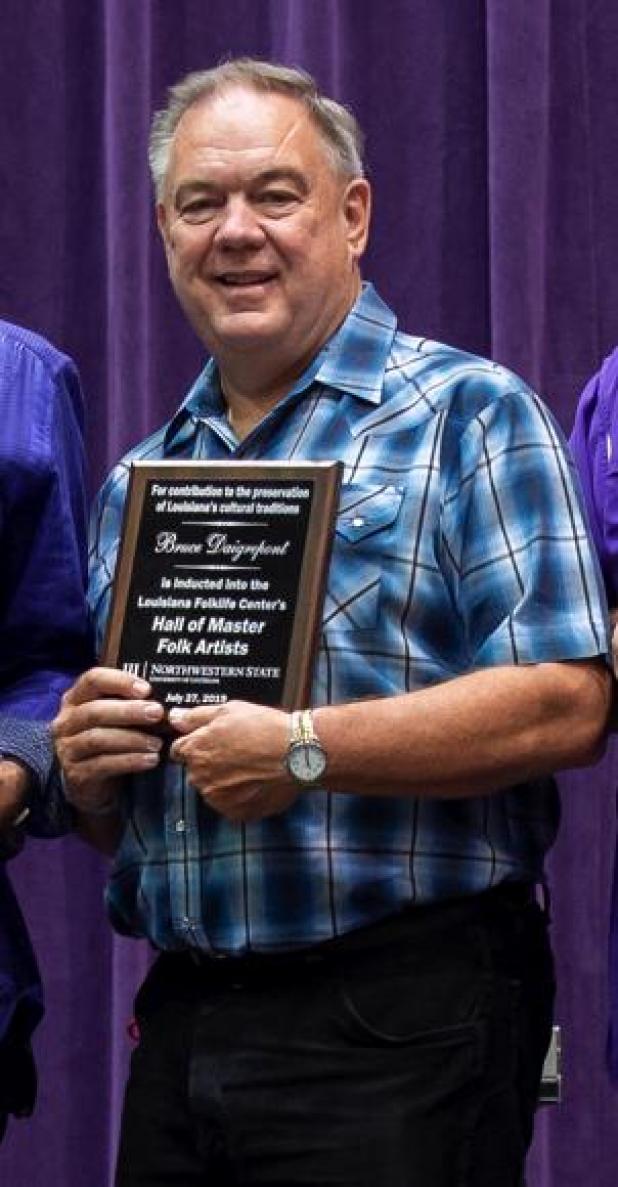 There may have been more money to be made playing mainstream rock music, but music was never about money to Bruce Daigrepont.

Daigrepont, a renowned Cajun musician, was born and raised in New Orleans. However, his roots run deep in Avoyelles Parish’s fertile soil. He was inducted into the Louisiana Folklife Center’s Hall of Master Folk Artists in July.

“Both of my parents were from Avoyelles,” he said. “My mother lived five miles south of Marksville and my father was from Egg Bend, near Fifth Ward.”

He spent many weekends with grandparents when he was a child and still visits friends and family in this parish at least two or three times a year.

“Avoyelles Parish has had a big impact on my life and my music,” Daigrepont said. “My parents moved to New Orleans, but in a very real way they never left Avoyelles. They brought it with them.”

He said the family spoke French in the home, ate gumbo and other favorites made the Avoyelles way -- not the New Orleans versions -- and played the games his parents grew up playing.

“One of the first songs I wrote was the ‘Marksville Two-Step,’ which is the story of Marc Eliche and the founding of Marks-ville,” Daigrepont said. “Another is the ‘Red River Waltz,’ about a rich man who lost his fortune gambling -- and I wrote that many years before there was a casino in Marksville,” he added with a laugh.

“I started playing guitar when I was 5 and then picked up the 5-string banjo when I was 10,” Daigrepont said. “I always loved music and I knew that was what I wanted to do with my life.”

As a teenager he thought he would one day “be standing on stage, singing ‘Brown-eyed Girl’ or some other rock song. When I was 20, I went to the Festival Acadiens in Lafayette and it changed my life.”

It was at that 1978 festival where he decided to add the accordion to his list of musical instruments and “to play the music of my heritage and culture,” Daigrepont said. “That decision has brought me so much more joy than any amount of money I might have made singing ‘Brown-Eyed Girl.’”

Today he is one of Cajun music's ambassadors to the world.

He has performed at New York's Lincoln Center and at the National Folk Festival. At the request of the American Embassies, Daigrepont and his band have performed in El Salvador and Venezuela.

He has performed in Europe 21 times and in Canada at least 50.

Not only is he a Cajun music performer, he sings the songs in French.

He also writes the songs in French..

WROTE 55 SONGS
“I am probably most proud of having written 55 songs in Cajun French,” Daigrepont said. “Listening to the Cajun French songs I realized that most of them were about love lost, cheating wives and things like that,” he continued. “I decided to write about other things in life. I could write a sad love song in 30 minutes and it would be like 100 others.”

That’s why he chooses topics such as Marc Eliche deciding to open a trading post where his wagon broke down. He also draws inspiration from old French sayings.

It is his intent to show more of the Louisiana French culture than just forlorn love.

Perhaps the largest lagniappe Daigrepont has received from his decision to forsake rock and embrace Cajun music came when he played a concert in France in 2005.

“A family came up to me after the show and they told me we were related,” he said.

He said he went to their home, named Aigrepont, which was built in 1640.

The family name in France ended in the early 1900s when the last male died without a son. This family inherited the home through a daughter’s lineage.

“I was the first Daigrepont to be in that house in 100 years,” he said. “If I had decided to make a career playing some other style of music, that never would’ve happened.”

Daigrepont joined musicians Tab Benoit, Jamie Berzas and Vanessa Niemann and file´ maker John Oswold Colson in this year’s class of “master folk artists” in the hall in ceremonies at the Natchitoches-NSU Folk Festival on July 26-27. There are now 110 in the hall of distinction.

Benoit is a Blues singer and guitarist from Houma.

Berzas is an accomplished Cajun singer and musician from Mamou.

Colson has carried on his family’s tradition of providing filé for Cane River families and demonstrating how to make it in festivals and workshops throughout Louisiana and its neighbors.

Niemann, called the “Punk Rock Patsy Cline,” has performed with Willie Nelson and other noted entertainers.

“I play big events and small ones,” Daigrepont said. “You will never make a commercial success playing Cajun music, but there is the pleasure of playing our heritage. That’s more important than money.”