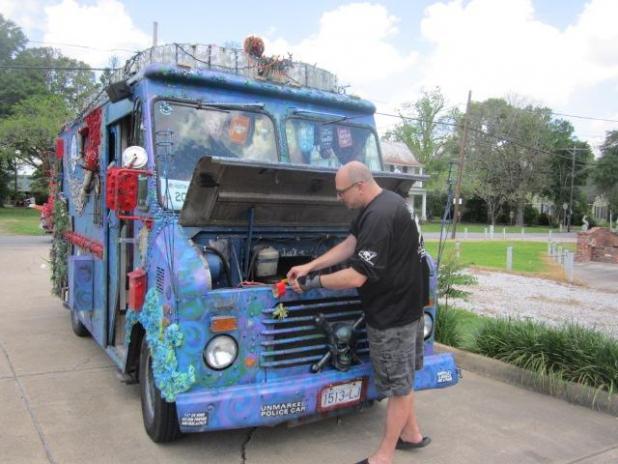 ENGINE TROUBLE
Alex Leslie works on his van, the Gypsy Caravan, which broke down in Marksville on the way back to Vancouver, Canada. {Photo by Raymond L. Daye} 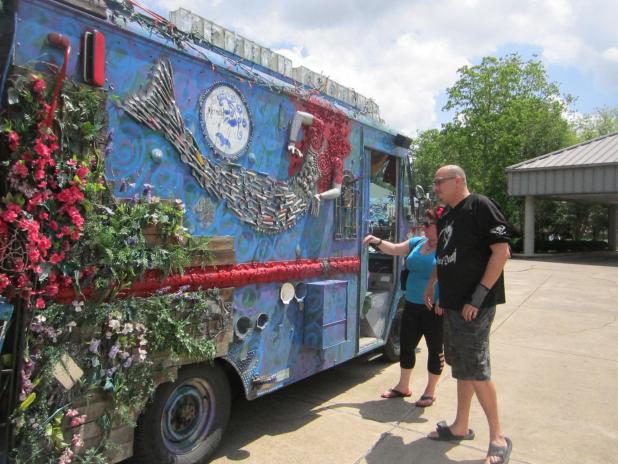 SEEING AMERICA -- FROM THE BACKROADS
Michelle Kaiser (left) and husband Alex Leslie admire the artwork on their van, which they call the Gypsy Caravan. The Vancouver couple came south to participate in the Houston Art Car Parade, to visit New Orleans and to see the USA from the backroads on their way home to British Columbia. Unfortunately, Gypsy had other plans, breaking down in Marksville and causing a brief delay in the road trip. {Photo by Raymond L. Daye}

Around 1794, a wagon broke down and the unlucky traveling peddler decided to stay. Due to Marc Eliche’s misfortune, Marksville was founded.

Last week another unfortunate traveler broke down, but Alex Leslie and wife Michelle Kaiser said they would only delay their road trip back to Vancouver, British Colum-bia, for as long as it took to get their van up and running again.

Alex and Michelle left their home in the Canadian province north of Washington State to participate in the Houston Art Car Parade earlier this month. After the parade, they decided to see New Orleans and take in the sights on the backroads of America on their way home.

While passing through Marksville, “we developed an electrical issue and then it just died,” Alex said. “A couple of guys graciously helped push us out of the road.”

Alex surveyed the situation while parked in the Union Bank parking lot on Tunica Drive. A few people came by to ask if they could help, but he told them he thought he had it figured out.

Leslie recently retired from being a tow truck operator. His wife is a chauffeur in Vancouver “and I plan to become a chauffeur, too,” he said.

Looking at the engine that refused to turn over, despite his best efforts, Alex said he would probably be calling on AAA to send a brother tow truck operator to his rescue.

Told the story of Eliche’s breakdown that became a new home, Alex laughed and said he would be staying “another night, at least, but then it’s back on the road.”

The blue, decorated van was Michelle’s before they got married.

“I toured the country for four years in this baby, then I met this guy,” Michelle said, motioning to Alex. “We parked her for awhile, but decided to take her back out for a mini-road trip.”

The van is decorated in a mermaid theme.

“This is called the Gypsy Caravan and I’m the Gypsy Mermaid,” Michelle said, noting that she has a fairly large following on Facebook and other social media.

The purpose behind her “tours” is “all about sharing smiles and giggles, inspiring art and bringing happiness,” she said. “This is the cure for road rage.”

In her pre-Alex days, Michelle supported her free-spirit lifestyle by singing, reading tarot and oracle cards and selling her artwork and CDs of her music.

She is also writing a book about her experiences on the road.

Maybe the motor’s malfunction in Marksville will merit a mention from the Mermaid.