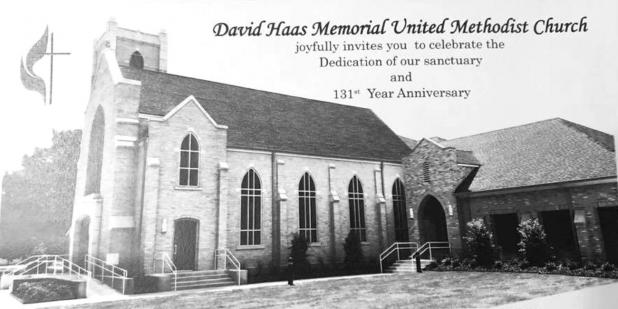 The invitation to David Haas Memorial United Methodist Church's dedication and open house events shows the sanctuary, which was able to use much of the former building's walls, and a new addition on the right that replaced a structure that was destroyed in the November 2016 fire.

Three years after a devastating and demoralizing fire destroyed much of the church, David Haas Memorial United Methodist Church will be dedicating its rebuilt sanctuary at 10 a.m. Sept. 8.

“At first it was devastating,” Rev. Joe Hoover said. “Out of those ashes came a new life that redefined the church’s mission in Bunkie and who we are as a people of God.”

Hoover was the church’s pastor for 10 years some years ago and came back six months after the fire when Rev. Brian Ridgedell moved to another pastorship.

“God helped us through some difficult choices -- in design and finances -- and we have seen miracles happen,” Hoover said.

One of those “miracles” is that the church will be debt-free when it is dedicated.

“We received so much support from the churches and communities in Bunkie,” Hoover continued. “We even had a church in Texas send us $10,000. It was just one miracle after another.”

Another miracle is that the new church will look much the same from the outside.

At about 10 p.m. on Nov. 20, 2016, Ridgedell was awakened by people pounding on the parsonage door to tell him the church was on fire. No one was hurt, but the sanctuary, fellowship hall, kitchen, office and the Boy Scout room sustained severe damage.

One of the most enduring images of that event is of a State Fire Marshal’s investigator looking at a gold cross -- untouched by the flames that destroyed the building around it.

While not quite in the category of “miracle,” the symbolism of the cross still standing amid the ruins of a violent world was not lost on those who witnessed it or the photo that captured the moment.

The efforts and attitude of the church members and their community neighbors over the past three years put that symbolism into action.

After the fire, Ridgedell struck an optimistic note that now seems prophetic.

“This is an amazing church and we will move forward,” he said.“I know we serve a good God and a powerful God and because of that, we will carry on the mission. I am just not sure what that will look like, but I have confidence all will be well.”

Hoover said Ridgedell will speak at the Sept. 8 service. He will be joined by former pastors Revs. Scott Adams and Larry O’Dell and Dr. Derrick Hills, the superintendent of the United Methodist Church Louisiana Conference’s Acadiana District.

Hoover extended a special invitation to all members of the public to attend the open house “to come see what the church looks like now.”