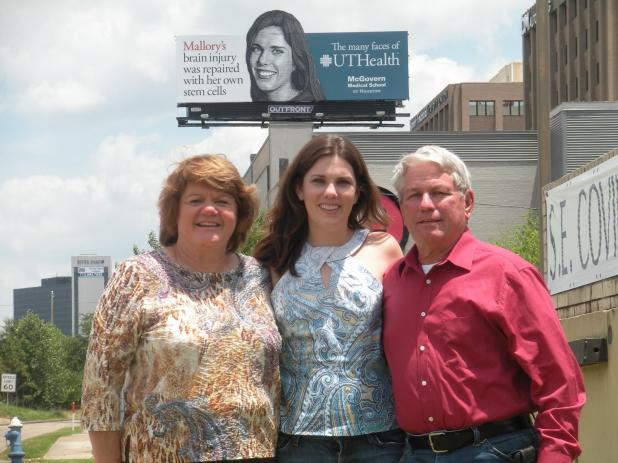 Mallory Mayeux (center), a Longbridge native, stands with parents Vickie (left) and Steven Mayeux in front of a billboard featuring the story of her recovery from brain injury. The billboard is part of a statewide campaign by the University of Texas Health Science Center (UTHealth) in Houston. Mallory was hit by a car in Houston four years ago and sustained serious injury. An experimental process used Mallory’s own stem cells to heal the brain damage from the accident.

Longbridge woman's recovery an inspiration to others

While crossing a street in Houston in July 2013, Mallory Mayeux was hit by a drunk driver, thrown 45 feet through the air and sustained a serious brain injury. She was put into a medically-induced coma and at one point was not expected to survive.

Now, almost four years after that near-fatal incident, Mallory is literally the “poster child” for the University of Texas Health Science Center (UTHealth) and an innovative treatment using a patient’s own stem cells to repair their injured brain.

Mallory, 32, is a native of Longbridge and the daughter of Steve and Vickie Mayeux of Longbridge. She is a 2002 graduate of Avoyelles High.

“It is very confusing to wake up in a different month and not be fully aware of what happened,” Mallory said. “This was a huge turning point in my life. I think of everything in my life as either ‘before the accident’ or ‘after the accident.’”

While she is now fully recovered and living and working in Baton Rouge, her image is featured on a billboard at a busy Houston intersection as part of UTHealth’s ad campaign, entitled “The many faces of UTHealth.”

The billboard was erected in early May and is expected to be replaced with another message in early June.

UTHealth’s publicity campaign focused on its doctors and technicians, including Dr. Charles Cox, who was Mallory’s stem cell doctor. The medical center decided it wanted to showcase some of its patients as well.

Since Mallory was one of its brightest success stories, UTHealth asked her if she would participate in the campaign.

Steve said a team of professional photographers and make-up artists descended on Mallory’s home and spent the evening taking over 800 pictures. One of those was selected for the “many faces” billboard in Houston.

To repay her mother for those month’s of care, dedication and love during her recovery, Mallory asked her parents and younger brother Caleb, who lives in Austin, to go to Houston to see the billboard in person over Mother’s Day weekend.

Mallory and Caleb paid for their parents’ hotel room, with a chilled bottle of wine and chocolate-covered strawberries and petit fours waiting for them in their room.

It is hard to describe what happened to Mallory as “lucky,” but in at least one way it was.

Because Mallory had no internal organ injuries or major broken bones, she was eligible to participate in a Department of Defense/UT Health program to use stem cells to treat brain injuries of soldiers coming back from Iraq and Afghanistan.

When her parents made the seven-hour trip to Houston, they arrived on a Sunday morning to find their daughter in a medically-induced coma in the ICU at Memorial Herman Hospital. They were asked if Mallory could be treated in the experimental program, given assurances that it could help and certainly would do no harm.

“I looked at all of the equipment and all that the doctors were doing to save Mallory’s life,” Vickie said. “I said that others let their sons and daughters participate in research projects to help my daughter, so we would do what was needed to help others.”

That Monday, doctors told the anxious parents that their daughter might not survive.

But she did survive. For three weeks she remained in the ICU.

Steve Mayeux recalled that as soon as Mallory overcame one problem, there was another to take its place -- brain swelling, pneumonia and several infections. One after the other, the doctors overcame the problems.

Mallory said the injury was a life-changing event. She still has some issues as a result of damage caused in the accident.

“There is no magic wand to cure everything that happened,” Mallory said. “The accident caused so much negative, but there was a lot of positives that came out of it, too.”

For example, Mallory said she can recall many times when a friend was injured or ill “and I think back now and say I should’ve done more, I should’ve been there for them, but I didn’t know what to do or how to help them.”

The injured person does not want to appear to be needy or demanding on their friends and family, and so may not let them know how they can help.

“It may be just wanting someone to talk to,” Mallory said. “Don’t be shy about making your truth known.”

Friends and family should also not be hesitant to offer help without being asked.

“Maybe you can go over to that person’s house and mow the lawn,” she said.

“So many people were so awesome to me and my parents during my recovery,” she continued. “I was really touched by their care for me and my family.”

Vickie and Steve said they hope Mallory’s billboard gave hope to others going through a similar ordeal.

“It may let them know that there are resources out there,” Steve said.

Vickie left home around 2 a.m. on a Sunday morning with a hastily packed suitcase and the clothes on her back. She returned to the Mayeux home in Longbridge four months later.

Steve stayed a few weeks before coming home. Vickie lived in Mallory’s apartment. She said she is grateful her employer, the Avoyelles Parish School District, allowed her to take a sabbatical leave so she could care for Mallory.

Seven months after the accident, Mallory was once again driving and living on her own.

The man who struck her was sentenced to eight years in the Texas State Penitentiary.

Steve said that early-morning call gave them next to no information on Mallory’s condition.

“We didn’t know if she just had a broken leg or if it was much worse,” Steve said. “All they told us was she had been in an accident.”

When he and Vickie entered the ICU and saw Mallory hooked up to several machines, “I took her hand. I was quite upset. I kept looking at the heart monitor to make sure she was alive, because she did not look alive or feel like she was alive.”

Vickie said she got through those hard few weeks of not knowing if Mallory would pull through by “playing ostrich. I said, ‘I can’t lose her,’ so I just told myself I wouldn’t. I blocked all the bad possibilities out of my mind. When there was a new problem every day, I just didn’t worry about it at the time. I just believed it would all be okay.”

Steve said this type of experience changes the way a person looks at life.

“When Mallory was going through rehab, we would get so excited when she would be able to do something new -- something minor,” Steve said. “Before this, those kind of minor achievements would have seemed so discouraging.”

Mallory said she was in out-patient rehab for about a year. There were times when she wanted to get up and walk out and never come back.

“They started with very basic skills,” she said. “They had me working with building blocks on the floor. I felt disheartened and humiliated. I had an office a few blocks from the hospital that I felt I should be in making adult decisions and here I was playing with blocks on the floor.”

She said she later realized that the activity was not aimed at “building towers out of blocks,” but rather to train her brain to start and finish a task without getting frustrated.

“Rehab helped me so much,” she said. “I made tremendous improvements.”

If this kind of tragedy had to happen, she said she is glad it happened in Houston. She is also glad she had good insurance and was a Texas resident at the time.

Those factors, combined with her eligibility for the stem cell project, resulted in what many call a miraculous recovery.

Steve and Vickie said they met with other brain injury patients and their families, “and so many of them were not making anywhere close to the progress Mallory was making.”

Mallory said the most important thing for someone with a serious injury “is don’t give up. Don’t stop trying to get better.”

Progress may be slow and they may feel frustrated, she said, but it is important to stay with the rehab and keep working toward a full recovery.

“It takes more energy to sit around and feel sorry for yourself than it does to stick to the program and work toward recovery,” Mallory said.

“People say I hit the home run in the World Series in my recovery, but I am still struggling,” she continued. “I still get frustrated at times. I know I cannot be embarrassed about my brain injury. It was not something I did, but it is part of my reality -- and that’s okay.

“I am a work in progress,” Mallory said. “It’s like they say, ‘You only live once,’ and I don’t want to miss out on a single part of it.”