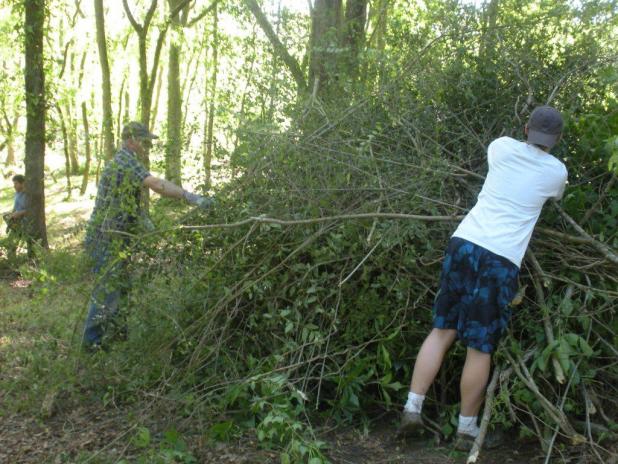 CLEANING UP FORT DeRUSSY
James Gaspard (left) and grandson Zack Ponthieux, both of Bluetown, pile up brush cut and collected at Fort DeRussy during the site’s “Park Day” event on April 1. It was the first organized Park Day since 1998. {Photo courtesy of Steve Mayeux} 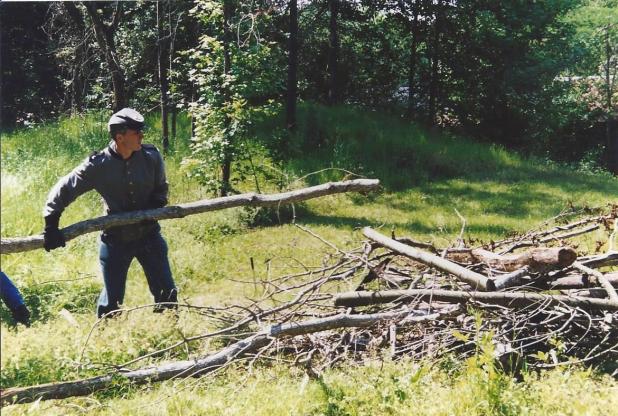 Working at the Fort
JOHNNY REB DOES HIS PART, IN 1998
Ward Zischke, decked out in an authentic Confederate Army uniform, stacks branches at Fort DeRussy during the 1998 Park Day event. Zischke was the manager of the Marksville State Historic Site (prehistoric Indian mound park/museum) at the time. He is currently historian for the U.S. Army Reserves’ 88th Regional Support Command at Fort McCoy, Wisc. He still often wears Civil War uniforms in his presentations to various historic organizations. {Photo courtesy of Steve Mayeux}

A number of volunteers showed up on a beautiful spring day to put a little “sweat equity” into helping to preserve one of this area’s most historic sites.

“We had a good turnout and everyone who showed up was a hard worker,” Mayeux said. “The weather was perfect.”

Volunteers picked up a lot of sticks, cut up thorn trees and made piles of brush that will be burned.

In general, they helped make the undeveloped tourist attraction a little more attractive.

One project was to clear the brush from one of the fort’s earthen walls and plant Asian jasmine as ground cover to protect against erosion.

Mayeux said the local community was well-represented, but volunteers from other areas of the state also came out.

Refreshments were provided by the Marksville Chamber of Commerce and Avoyelles Police Juror Mark Borrel.

Park Day is sponsored by the national Civil War Trust to encourage the preservation of Civil War, Revolutionary War and War of 1812 battlefields.

“The fort is looking much better now than it did before,” Mayeux said.

The event also gave the Friends of Fort DeRussy a much-needed shot in the arm to renew its efforts on behalf of the fort, once called the “Gibraltar of the South.”

The state has declared Fort DeRussy a state historic site, but budget woes have forced it to scale back an already minimal maintenance of the site. Mayeux said the Office of State Parks has turned the site over to the local non-profit organization, at least for the time being.