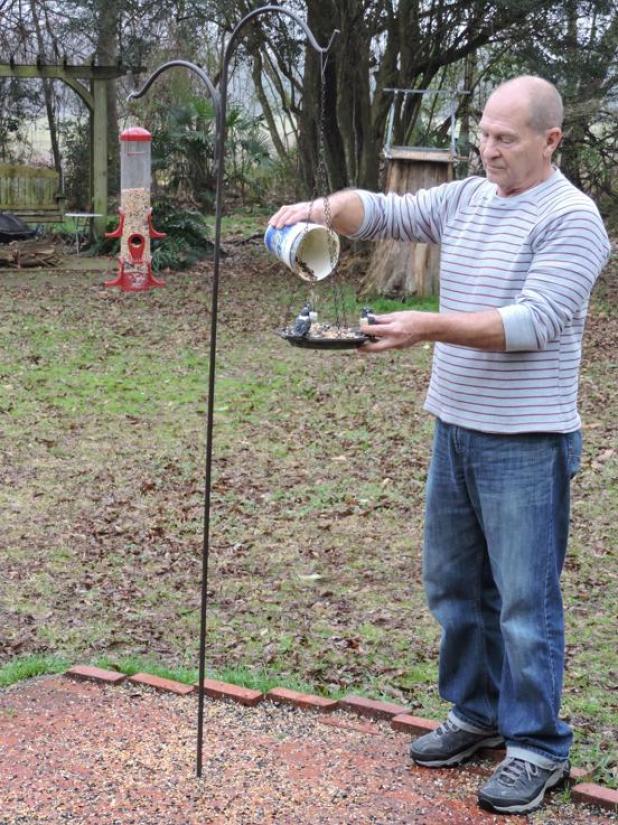 Floyd Bonnette of Fifth Ward fills up one of the many bird feeders at his house. Bonnette has been watching birds his entire life and says they now brighten his days in retirement. 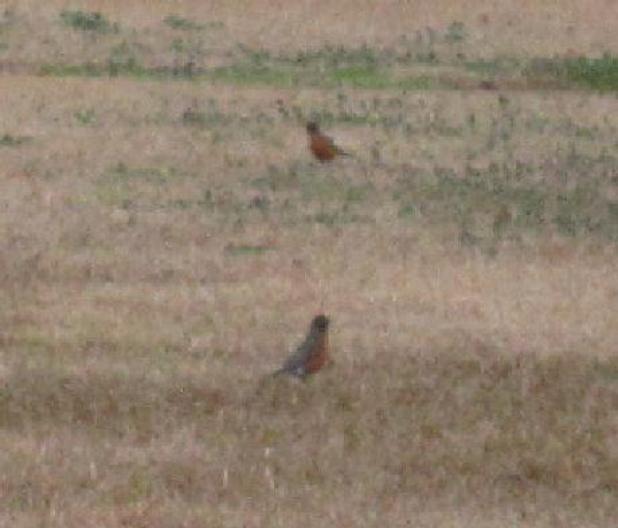 These are a couple of the many robins who descended on lawns earlier this month. Most of the migratory songbirds were on their way back to their nesting areas in the North and Canada, but some remain here year-round to raise their young. {Photo by Raymond L. Daye} 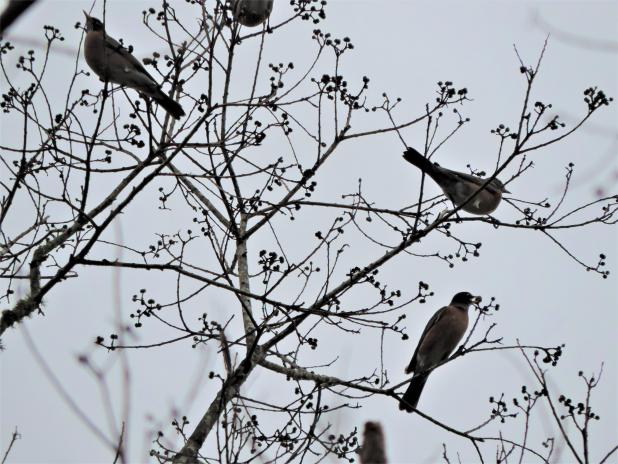 A flock of robins stop in Floyd Bonnette’s tallow tree for a quick snack on Feb. 3. They also helped themselves to earthworms that had been coaxed out of the ground by recent rains and warmer weather. The appearance of robins is said to mean that Spring is just around the corner. It seems the birds were right. {Photo by Floyd Bonnette}

Are two birds in the yard worth more than one ‘hog in the ground? We may have the answer to that question.

A day after Puxatawney Phil saw his shadow in Pennsylvania, proclaiming six more weeks of winter, the first robins of spring were hoppin,’ boppin’ and rockin’ their way across lawns in what many believe means spring “is just around the corner.”

Another flock of robins from farther south stopped by Avoyelles yards on Valentine’s Day. Another small wave came through earlier this week, probably from wintering sites in Mexico.

Some people hold that the arrival of robins actually begins spring. Others maintain the season of rebirth begins when the robin sings its first song after remaining silent all winter.

“The robins came into my yard a few days ago, maybe 30 of them,” Floyd Bonnette of Fifth Ward said shortly after the Feb. 3 arrivals. “There aren’t as many as there were in past years.”

Bonnette said he has had a lifelong appreciation of birds -- not only for their beauty and their songs, but for benefits to people they provide by eating insects.

“Now that I’m retired, I guess about half of my pension goes to buy birdseed,” he added with a laugh.

Bonnette pointed out that the robins dropping in this time of year aren’t coming in, they’re going out.

“The majority of robins in this area come here in October and winter in the backwoods and bayous, like the Atchafalaya area, eating various berries,” he said. “When the weather warms up, they move to find other food -- earthworms and insects -- and then head back to their nesting areas.”

If it is warm enough for robins to leave their winter quarters, then spring is near.

While some robins stay in this area year-round, Bonnette said most are following a food trail on their way to their native nesting areas up north.

When the number of robins dwindles to just a few, it may be a sign that a few couples have decided to stick around and raise their “robin-lings” nearby.

LIFE OF A ROBIN

It is during this time that the robin’s song can be heard -- from early morning until after sunset -- as the male seeks to impress the females with his singing ability.

Climate change has been blamed for affecting birds’ migration patterns. In particular, experts note that fewer robins are wintering in Southern states, choosing to stay up North through what is now a milder winter than their ancestors’ had to endure.

Separate studies by the U.S. Fish & Wildlife Service, U.S. Geological Survey and National Oceanic and Atmospheric Administration all concluded that average temperatures are rising and it is affecting the birds.

Bonnette said he has also noticed fewer birds of other species that used to migrate here in winter.

Bird experts note that the female robin does most of the work in building the nest, but their mate may assist.

She usually lays four pale blue eggs, which she takes sole responsibility for sitting on until they hatch.

A robin’s nest is usually located on a horizontal tree branch 6 to 25 feet from the ground. It is made with grass and twigs with mud being used to hold it together.

Both parents take turns feeding the hatchlings and aggressively defending the nest from threats.

The robin is a member of the thrush family. It is no relation to the European robin, which belongs to the flycatcher family of birds. European settlers called the American bird a robin because both birds have bright red plumage on their breasts.

Both birds are also held in high regard by their native communities.

The Europeans honor their robin as the bird who tended to Christ’s wounds as He hung on the cross -- the bird’s breast becoming stained by Jesus’ blood.

Several Native American tribes have folklore featuring the American robin. He is praised for his “can-do” attitude and industrious nest-building skills. The bird is also used as nature’s model for how parents should care for their children. One superstition is that it is good luck for a pregnant woman to see a robin feeding its young.

There are stories depicting the robin as a fire-bringer, which is how it got its red breast.

While the Judeo-Christian religions use doves as a symbol of peace, the Blackfoot tribe used the robin for that role. In fact, they believed that having robins nesting in the village protected it from attack.

For those who believe in animal totems, spirit-animal. com says the robin “signifies stimulation of new growth and renewal in many areas of life. He teaches that any changes can be made with joy, laughter and a song in your heart. This bird shows you how to ride the winds of passion within your heart and become independent and self-reliant through this change. The energy of this bird will teach you how to move forward with grace, tenacity, perseverance and assertion.”

If spirit animals aren’t your thing, perhaps you will find comfort in the words of songwriter Leon Rene of Covington, who wrote these words under the pseudonym of Jimmie Thomas:

He rocks in the tree-top all the day long.
Hoppin' and a-boppin' and a-singin' his song.
All the little birds on Jay Bird Street
Love to hear the robin go tweet tweet tweet.

Rene also wrote the bird-related song, “When the Swallows Come Back to Capistrano” -- another event which is said to signal the arrival of spring.