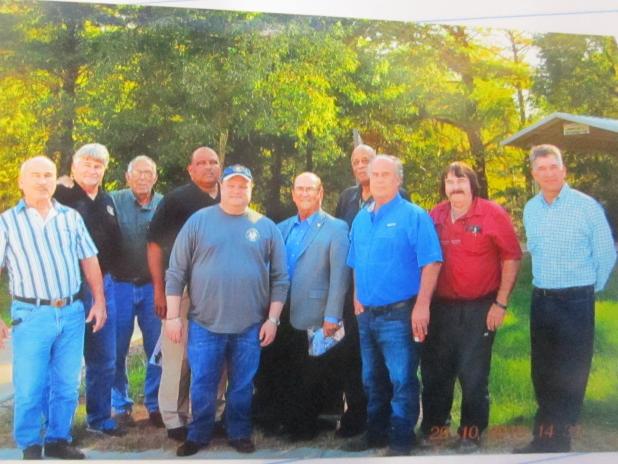 Efforts to improve Spring Bayou can be compared to the ducks that can be found in the complex -- serene on the surface and a flurry of activity below the surface that cannot be seen.

Louisiana Department of Fish & Wildlife Secretary Jack Montoucet visited the parish and the Spring Bayou Wildlife Management Area on Oct. 29. This was done in large part to fulfill a promise he made earlier this year when he and parish officials were trying to develop a program to address several issues related to the Spring Bayou watershed complex.

Montoucet was introduced to several members of the Lake Commission that was formed based on his recommendations during those discussions.

Police Jury President Charles Jones said Montoucet has recommended the Lake Commission talk to a LDWF biologist to establish guidelines and suggestions on how to pursue reasonable goals to preserve and improve the ecosystem and outdoor recreation at Spring Bayou.

“The most important news he brought us was that a dredging project to connect Boggy Bayou to Little River has been approved,” Jones said.

Other issues under discussion include continuing a chemical defoliation program, the periodic restocking of game fish and possibly the grass carp program that has been credited with solving the aquatic vegetation problem that once plagued the complex.

“Montoucet was also very outspoken in his encouraging us to pursue funding for improvements under the Governor’s Watershed Initiative,” Jones said.

That program is focused on drainage improvement and flood risk abatement, but it could also include projects to address some of Spring Bayou’s identified problems. The federal government has allocated $1.2 billion for projects to reduce flood risks in Louisiana.

One issue the Lake Commission is considering is how to remedy the siltation problem in Spring Bayou. Another is how to ensure water levels do not get low enough to hamper fishing and pleasure boaters’ use of the waterway.

Those two issues could be tied into drainage improvement projects.

Montoucet also discussed the possibility of LDWF improving the RV park at Spring Bayou and working with local agencies in repairing the Old River dock in the Spring Bayou complex.

In a related matter, the Police Jury discussed the need to clean out about 3-4 feet of muck in front of the Little River dam gates before the parish is able to open the gates to see if they still work.

Civil Works Director Kevin Bordelon said the work will have to wait until it is dry enough to get the necessary equipment in to the site. That won’t happen until late Spring or early Summer.

Bordelon said the clearing of the muck will extend about 50 feet in front of the gates.

After all the math is said and done, the project will involve moving about 350 yards of mud from the bottom of Spring Bayou and putting it against the nearby levee.

The gates have not been opened in several years. Jurors asked what would happen if the gates broke when they were opened and could not be shut.

Bordelon said the workers will have “super-sacks” of sand -- the type used to raise levees during high river events -- that would be immediately dropped in front of the gates to plug the hole until permanent repairs could be made.

Nobody is expecting a problem, but Bordelon said the parish will be be prepared in the event one occurs.