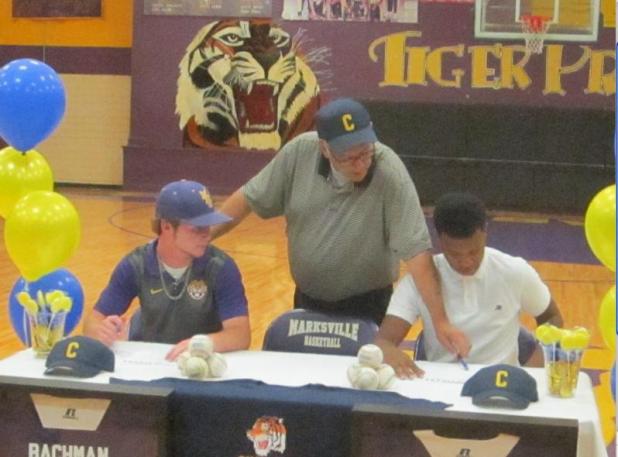 Two young men will soon be playing the game they love on the same piece of ground where Babe Ruth hit major league baseball’s first 500-foot home run in 1918. A feat that set the star left-handed pitcher on his way to becoming a homerun-slugging outfielder.

On Aug. 2, another left-handed pitcher who can also play outfield and a talented 2nd baseman signed paperwork making them part of the newest baseball program to play on Hot Springs’ historic baseball diamonds.

Ricky Hayes Jr. of Cottonport is the “pitcher we’ve been waiting for,” Coach Dwain Roark said at the signing ceremony in the MHS gym. Roark said the new team was in need of a lefty and Hayes more than fills the bill.

Hayes, 19, has been out of baseball for a year, attending NSU in Natchitoches but not playing ball this past year. He was first team all-district centerfielder for the Marksville Tigers in 2016-17.

He is the son of Ricky Hayes Sr. and Ethel Hayes.

Kristopher Bachman, 18, of Center Point has played several positions, but is most comfortable at 2nd base.

He is the son of Greg and Candace Bachman.

Bachman attended LaSAS, but because that Avoyelles School District charter school does not have sports teams, he was allowed to play ball for his zoned school of Marksville. Roark said Bachman was one of the first prospective baseball recruits to visit the Hot Springs campus. He said he knew right away Bachman was a good fit for the new team.

Both young men will be pursuing bachelor’s degrees in the classroom while they are representing Champion Christian in ballparks in the region.

Roark said academics will come first. He told the parents he will see to that personally since he will be living in the dorm for at least the first semester while his family finishes preparation to move from Batesville, Ark., to Hot Springs -- a three-hour drive.

“My home is almost as far away from Hot Springs as you are,” he told the group gathered in the gym.
Hopes to play in area

Roark, who is originally from Jena on the other end of the Central Louisiana area, said he hopes to play teams in this area once or twice a year.

He believes CCC will be able to play Louisiana College. Both are Baptist-affiliated colleges, but LC is larger and has an established baseball program.

LSUA is another possible opponent Roark would like to play in this area.

He said the team will have a short fall season and a spring season.

“I am glad I get to go to the next level of playing baseball,” Bachman said. “I love this game and I am glad I have this opportunity to continue playing.”

Hayes also said he is “looking forward to playing baseball -- and getting my degree in business.”

Roark said this will be the first year Champion has a baseball team. It has had a basketball program for several years.

“We will be an independent for the time being,” Roark said, noting that joining a conference may be a few years down the road.

Roark has many years of coaching experience behind him. His last position was at Midland High in Pleasant Plains, Ark.

He said he came out of retirement when Champion asked him to be the coach to start up the Tigers’ baseball program.

For baseball history buffs, the Boston Red Sox started using the Hot Springs area for spring training in 1909. Ruth faced his first major league batters as a minor league pitcher there. He made the Red Sox roster in 1915.

During Spring Training of 1918 Ruth had to play 1st base against the Brooklyn Dodgers. It was in that game the Red Sox realized Ruth was a slugger as well as a slinger. He hit two home runs, including a 573-footer that landed in the Arkansas Alligator Farm tourist attraction across the street from the ballpark.

The Sox put Ruth in the batting order regularly during the 1918 season. He led the American League with 11 home runs that year and also had a 13-7 record as a pitcher, helping the Red Sox win the World Series.

Boston sold Ruth to the New York Yankees in the offseason of 1919-20 -- an act that many said started the “Curse of the Bambino” that kept the once dominant Red Sox out of the World Series until 2004.

The baseball diamonds weren’t the only Hot Springs locations that attracted the Bambino’s attention. He also enjoyed the hot baths, casinos and horse track.

Another legend with links to the ballpark complex is Hank Aaron, who led his Indiana Clowns to the Negro League World Series championship in 1952. The 18-year-old slugger hit five homeruns and had a .402 batting average during the series.

There are also several other icons of the game that played or practiced on those fields.