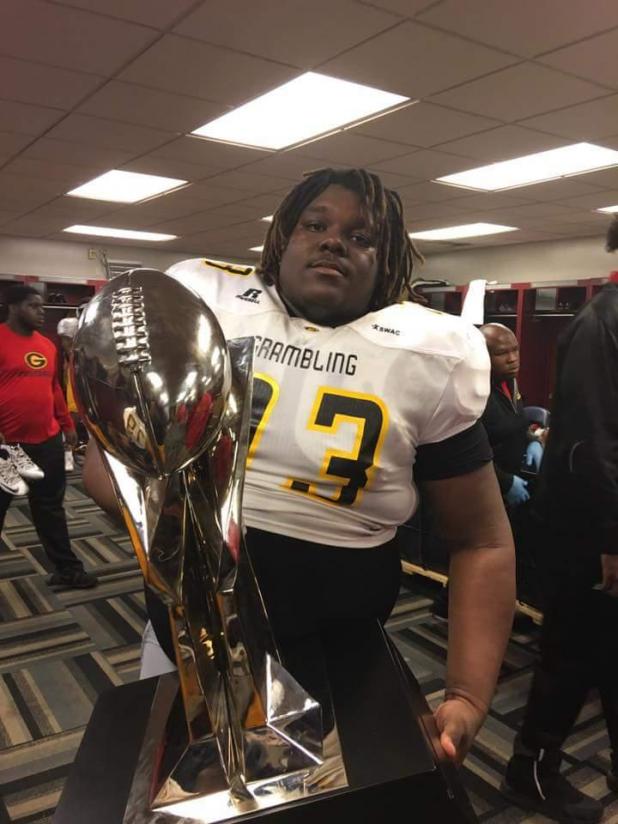 Although only a freshman, Carl Wilmer Jr. was able to log a lot of playing time for the Grambling Tigers in their phenomenal 12-1 season, which ended with the Tigers winning their 15th Historically Black Colleges & Universities national championship. The young man from the Hickory Hill community in Avoyelles played at right offensive guard in every game.

Part of the reason was the fact that the Tigers had 10 runaway victories in their regular season. The other, of course, is because the 6-4, 300-pound offensive lineman is a talented athlete.

Grambling defeated Alcorn, 27-20, to take the SWAC trophy. On Dec. 17, the Tigers entered the Georgia Dome in Atlanta to face the North Carolina Central University Eagles for the HBCU national championship and won that game, 10-9.

That game was decided by a blocked extra point attempt with two minutes left in the game. The SWAC championship game was a rematch, with Alcorn putting up a much stiffer fight than it did early in the season when the Braves were mauled 43-18.

Wilmer said he was never worried in the SWAC Championship game “because I knew the kind of team we are. I knew we would win.”

A PROUD FATHER
A delegation of Avoyelles Parish fans attended many of Grambling’s games. The group was led by proud father Carl Wilmer Sr. He also had fans in Mom, Amanda, and big sister, Roslyn Wilmer, the head coach of MHS’ girls basketball team. Others in the group included grandparents, aunts, uncles and other family members of young men on the GSU squad.

Besides enjoying the games, the group also enjoyed tailgating and cooking up their favorite treats.

Carl Sr. said he is proud to see his son “becoming a fine young man who is excelling in the classroom and on the football field.”

“My son is already giving me a hard time saying it took me four years to get my ring and he got his in his first year,” he said with a laugh. He added that he is glad Carl Jr. was able to attend a university with a heritage of good education and sports.

The elder Wilmer played basketball at Marksville High but did not play football.

GRAMBLING TRADITION
Carl Jr. has a 3.2 grade point average for his first year at Grambling. He said being able to play on a team with the tradition of the Tigers “is a blessing. It means a lot.”

While the Black & Gold has had some lean years since the legendary Eddie Robinson’s era at the helm, Carl Jr. said the team is intent on “getting back to that tradition.”

His short-range plans are simple: “Looking for another championship ring. To do that, it comes down to dedication.”

While quarterbacks probably don’t like to admit it, offensive linemen -- guards, tackles and centers -- consistently score highest on the NFL’s “intelligence test,” earning the positions the label, “the smartest guys on the field.”

Wilmer fits the model of an offensive lineman -- selfless, dedicated, thinking only of how he can help his team succeed by protecting the quarterback and opening a hole for the runningback to exploit.

The offensive lineman is best described as a big man with a small ego and broad shoulders able to carry a heavy load of responsibility while receiving little or no public praise for a job well done.