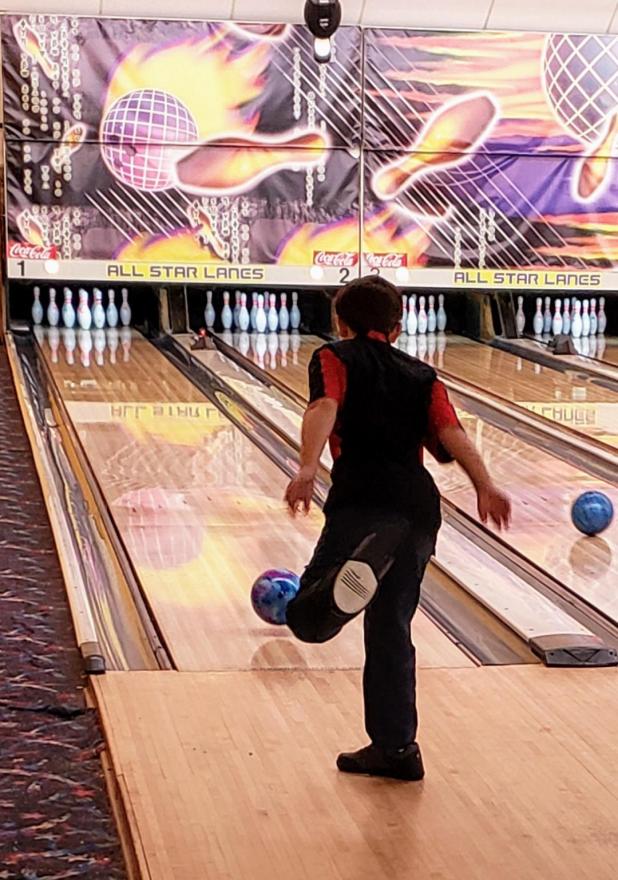 Tyler Couvillion, 14, of Hessmer sends the ball down the alley during the state Special Olympics Bowling Tournament on Jan. 11 in Baton Rouge.

Tyler Couvillion, who has autism, displays his gold medal for bowling he won at the state Special Olympics tournament. Tyler is 14 and attends Bunkie Magnet High School.

Tyler Couvillion, 14, of Hessmer bowled an 89 to earn a gold medal in his division at the Louisiana Special Olympics Tournament in Baton Rouge on Jan. 11.

Tyler is an 8th grader at Bunkie Magnet High and the son of Jared and Roxanne Laborde-Couvillion.

Tyler, who has autism and is non-verbal, “enjoys participating in the Special Olympics Central Area events,” Roxanne said. Participation in the events has helped Tyler, which has made his mother a vocal advocate of the program.

The Couvillions became active in the organization last year. Roxanne became a coach for events and helped recruit and organize volunteers for the organization’s bowling tournament in December at Four Seasons Lanes in Alexandria.

Tyler placed high enough in that tournament to qualify for the state event at All Star Lanes in Baton Rouge.

Roxanne said she believes he was the only bowler from Avoyelles to win a gold medal at the state tournament.

“The divisions are based on age, gender and disability,” Roxanne said. “There are boys and girls divisions. Some divisions are for those in wheelchairs, etc. Special Olympics is for anyone with disabilities from children up to 99.”

Roxanne said the local Special Olympics organization’s next event is a field day at NSU in Natchitoches on April 7. It will include races, softball and tennis ball throws and other field events.

“We are trying to raise awareness and encourage participation in Special Olympics,” Roxanne said. “We especially want more kids involved.”

For more information on becoming an athlete, volunteer or supporter of Special Olympics, go to www.laso.org, the Special Olympics Louisiana-Central Area Facebook page or email central@laso.org.