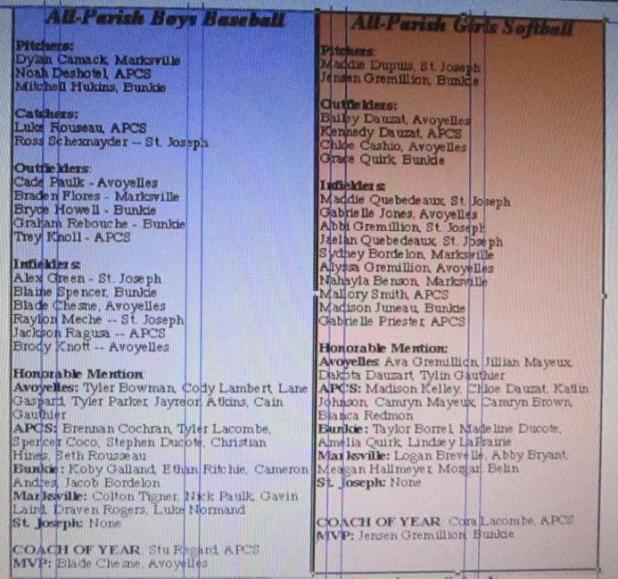 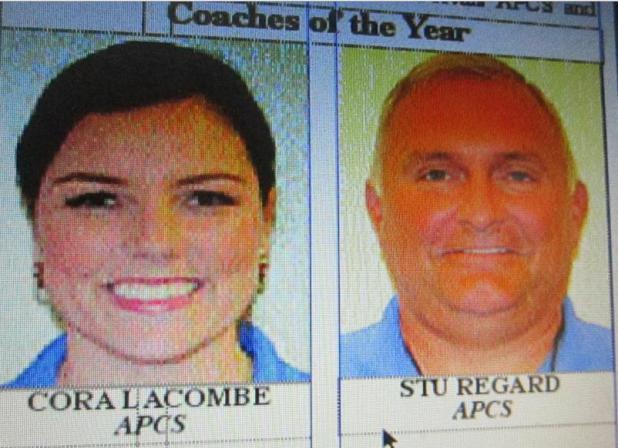 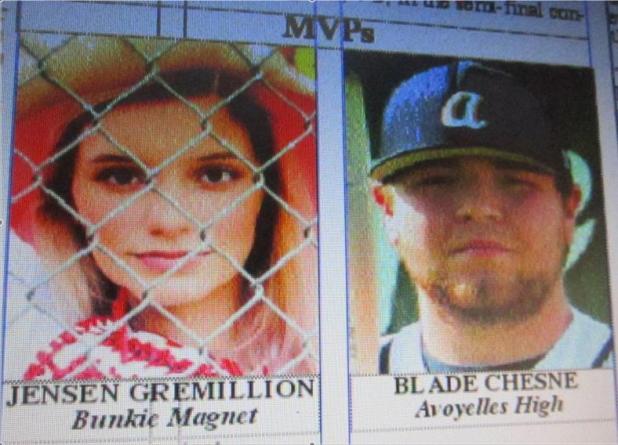 Baseball may not be as popular as football in the world of sports entertainment, but it is still “America’s pastime.”

And Avoyelles Parish is fortunate to have 10 baseball/softball teams to represent their schools and the parish on the diamonds throughout the state.

The talent on those teams has been recognized by several selections to their districts’ All-District teams. This newspaper further recognizes those student athletes with the All-Parish teams for baseball and softball.

Rather than have a “1st team” and “2nd team,” the All-Parish team has an expanded roster of 16 honorees, plus honorable mentions.

Avoyelles Public Charter School sent both Vikings teams to the playoffs as the No. 7-seeds in the 32-team Class AA tournaments for baseball and softball. As a result, the APCS head coaches are this year’s Coach of the Year in their sport.

The boys team, mentored by Stu Regard, was bumped out in the quarterfinals by No. 2-ranked Doyle, losing the first game of the series 2-0 and the second game, 3-2.

Doyle was upset in the championship game by No. 5-seeded Kinder, 11-4.

The Lady Vikings went the furthest in the playoffs, dispatching three teams before falling to eventual Class AA champion Mangham, 4-3, in the semi-final contest.

The Lady Vikings, with Head Coach Cora Lacombe, exacted a measure of revenge for the APCS boys by upsetting No. 2 Doyle in the girls’ quarterfinals, 4-3.

There were several contenders for MVP in both baseball and softball, but as the Highlander once said, “There can be only one.”

That one for boys baseball is Blade Chesne of Avoyelles High School. The Mustangs’ 3rd baseman earned co-MVP honors in District 3-AAA.

“What made Blade Co-MVP in District 3-AAA was his great year at the plate for us,” Mustangs Coach Ryan Gremillion said. “He was a very tough out in the heart of our lineup that hit to all parts of the field.”

Gremillion said Chesne “is that player that comes early and stays late and will do anything he needs to do for the team. Blade was the heartbeat of our team. He kept everyone on the same page and was always the spark we needed to get things going.”

Gremillion said he is “looking forward to having him one more year with our program, we need more kids like Blade to continue to grow as a program.”

For the girls’ teams, Bunkie Lady Panthers pitcher Jensen Gremillion complemented her pitching efforts with hitting and base-running skills that helped lead her team deep into the playoffs.

Fortunately for Bunkie, she is only a junior and has another year to improve.

On offense, she had a .411 batting average and .500 on-base percentage. She belted six homeruns and drove in 42 runs. She also had 14 singles, 14 doubles and three triples at the plate. Once on base, she stole 13 bases during the year.

Lady Panthers Head Coach Katelyn Hines Hillman said Gremillion “came to Bunkie High School as a sophomore, knowing she would not be able to play that year. I knew it would be a challenge to keep her focused and working hard throughout the year knowing she could not step foot on the field.”

But she did keep focused and improved every aspect of her game.

“She never hesitated one second,” Hillman said. “She worked hard all year long and came to the field this year as a junior better than ever. She led the team in just about every stat this year and was the kid I wanted at the plate in any high pressure situation.”

Hillman said Gremillion “leads by example and is the type of player other kids want to follow. We are looking forward to an even better season this coming year with Jensen using her leadership on the mound and in the lineup.”

OTHER TEAMs’ RESULTS
St. Joseph, playing in District 6-C in the regular season and in Division V in the softball playoffs, won their first game in the playoffs before being eliminated by eventual Division V champ Claiborne Christian in the semi-final game, 16-1.

Bunkie’s Lady Panthers made it to the quarterfinals, where Kinder defeated them, 3-0.

Kinder faced Mangham in the title game, falling to the Lady Dragons, 9-8.

The parish was just a few points away from an all-Avoyelles championship game between District 4-AA rivals APCS and Bunkie.

Avoyelles and Marksville both fell in the first round of the Class AAA playoffs.

For the boys teams, Marksville did not qualify for the playoffs and Avoyelles fell in the first round in Class AAA.

St. Joseph was defeated, 14-0, by Claiborne Christian in its first game of the playoffs. Claiborne fell in the semi-finals to Runnels, who lost to Northside Christian for the Division V championship.

Bunkie advanced through two rounds in the Class AA playoffs before being eliminated by Many, 15-9 and 8-4 in a best-of-three series prior to the quarterfinals.