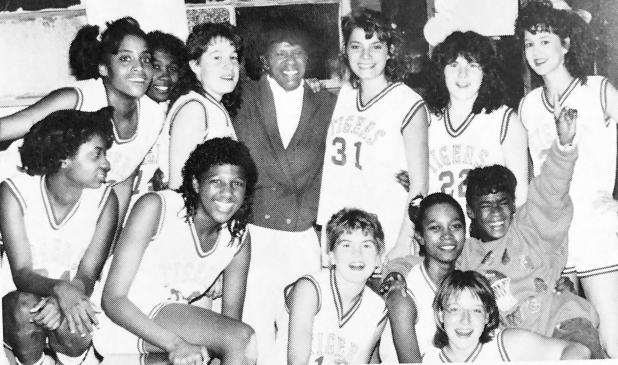 Marksville High School’s gymnasium may soon be named in honor of former teacher and coach Jackie Small who recently died. Small passed away at her home in Marksville on June 22 at the age of 77.

A group supporting the renaming of the gym attended the Avoyelles School Board Building & Lands Committee meeting on July 17 to present the request. The committee unanimously recommended the board rename the gym in Small’s honor. The full board is expected to approve renaming the gym the Jackie A. Small Memorial Gymnasium at its Aug. 7 meeting.

Georgiana Kendall, a former MHS teacher and the group’s spokesperson, said Small devoted 34 years of service to Avoyelles Parish schools as a teacher and coach.

During her tenure at the parish high schools, she led her teams to several district championships and three appearances in the Sweet 16 Class-AAA girls basketball tournament, which was the girls basketball state semi-finals and finals. Each time the Lady Tigers were defeated in the semi-finals.

She was named the District and Parish Coach of the Year several times and had several players named to the All-State basketball teams, including her two daughters.

“She influenced so many lives during her teaching and coaching years,” daughter Latisha Small said the week her mother passed away. “Her love expanded across all barriers, including race and religion. She loved her family and church community so very much.”

She was born on Dec. 21, 1940, in Bunkie and graduated from Carver High in 1958, where she was a standout athlete. After high school, she earned a bachelor’s degree in Health, Physical Education and Recreation from Grambling State University in 1962.

Kendall read a letter written by former player Charnelle Adams Mose, who called Small, “Momma Jackie” -- a nickname she was affectionally known by within the school and community.

“She coached three generations of my family,” Mose wrote. “She coached my mother at Bethune High School, my sister and lastly myself. She was a beloved and respected coach who transcended the realm of basketball and made an enormous impact to the Marksville High girls basketball team, its sports program and the community.”

Mose’s letter continued to recount that Small had a keen understanding of what it means to be a champion and brought out the best in all those who played for her.

“On paper, there were many teams that were more talented than the Lady Tigers, but one thing that always set her and our team apart from any other team is that she always outworked her rivals and expected everyone who was a member of the team to have the same work ethic,” Mose said. “Mrs. Jackie was adamant that her team would operate as a family unit. She became our second mother.”

Small was invested in the future of the girls on the team and was actively engaged with the players, family and teachers to ensure all of her players were meeting the standard not only on the court, but academically.

“Playing for a great coach is never easy, but she made all of us winners and brought credit to our school and her basketball program and the parish,” Mose noted. “She was not only a coach but a mentor to all of her students, whether you played on her team or a student in her PE class. Her contributions have left an indelible mark on this school and parish. There is no other person more benefiting of this honor.”

School Board member Darrell Wiley agreed with Kendall and Mose’s comments before making the motion to approve the name change. Board member Jeralyn Young seconded the motion.