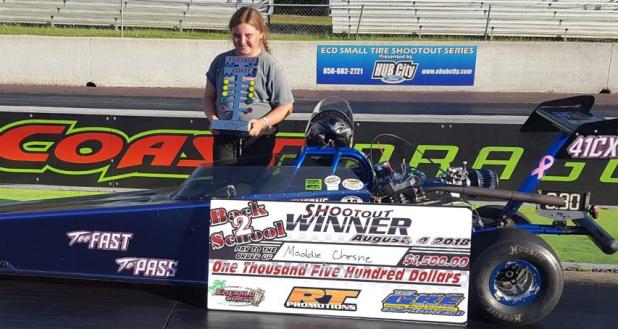 'TOO FAST TO PASS'
11-year-old racer Maddie Chesne holds the trophy she won at Emerald Coast Dragway in Holt, Fla., in her purple dragster, “Too Fast to Pass.” {Photo by C.J. Chesne} 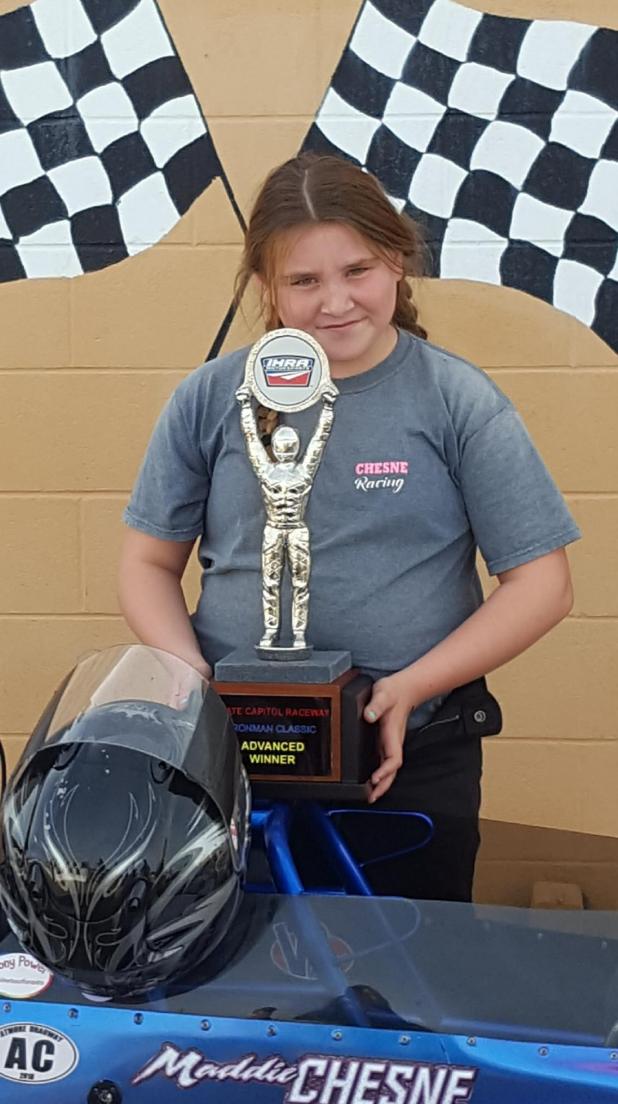 Maddie Chesne is a little young to be called a “fast woman” -- but she’s faster than most girls -- or boys -- her age.

Maddie is a champion junior dragster and has taken awards at State Capitol Dragway and No Problem Raceway in this state and Emerald Coast Dragway in Florida and finished fourth at Bristol Dragway in Bristol, Tenn.

Maddie, 11, of Simmesport is the daughter of C.J. Chesne and Pamela Purpera and is a 6th grader at Riverside Elementary.

“I enjoy racing,” Maddie said. “The boys don’t like racing me. I think it’s because if I beat them they would be jealous because they got beat by a girl.”

She races around the state as well as venturing to other states in the region. She has been racing since she was 7, when she asked Dad for a dragster and he said “Yes.”

“In her age category, the dragsters are limited to 76 mph,” proud papa C.J. said. “She enjoys racing and we enjoy it as well.”

‘TOO FAST TO PASS'

Maddie’s purple dragster is named “Too Fast to Pass.”

C.J. said he is not worried about his daughter’s safety in her chosen pastime.

“All of the cars are very safe,” he said. “They have all of the necessary safety equipment and they go through a lot of safety precautions before every race.”

Mom Pamela admits that seeing her baby girl flying down the drag strip at 75 mph “was a little scary at first, but we’ve gotten used to it.”

She said Maddie would go to the races with C.J. since she was a toddler.

“When she got old enough, she told us she would like to try it, so we let her.”

One drawback the parents will have in a few years is that it will be hard to tell Maddie she’s too young to drive the family car when she’s 15 after she’s been driving her own dragster for eight years.

Maddie said she enjoys the fact that drag racing is a series of two-car races -- one-on-one combat, so to speak.

The winner of one race runs against the winner of another until there are just two cars left, facing off for the championship trophy.

So far this year, she has added a 2nd place at Gulfport Dragway and will be going there this weekend (Feb. 16-17) for a rematch in hopes of bringing home another 1st place award.

For a pre-teen engaged in what is considered a “dangerous” occupation in the adult world, Maddie is lacking the braggadocio of the race car driver.

She doesn’t talk about her racing at school, but a few of her friends know about her hobby.

“I’m not afraid when I race,” Maddie said. “I’ve never been hurt and I haven’t even seen an accident at my races.”

Maddie thinks she wants to continue racing as she gets older.

Perhaps she’ll be another Danica Patrick -- who just recently retired from racing. Patrick got her start racing go-karts when she was 10.

Both of the female speedsters have proven that racing isn’t just for men and boys any more.