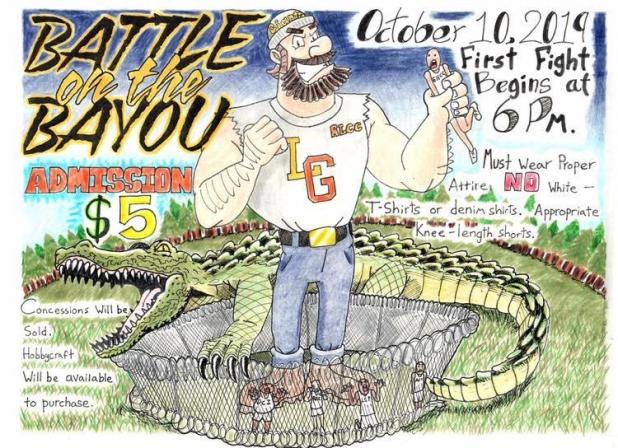 Nine state prison boxing titles will be on the line Thursday (Oct. 10) when Raymond Laborde Correctional Center hosts the “Battle on the Bayou.”

The first fight begins at 6 p.m.

There will be 12 to 14 fights with nine of those determining whether current titleholders retain the honor or if a new king in that weight class will be crowned.

The event is sanctioned by the Louisiana Institutional Boxing Association (LIBA), which provides the referee and judges to ensure a fair fight.

RLCC hopes to not only retain its four titles but to add at least one or two more to that list, Lt. Beau Milligan, RLCC recreation director, said.

The event is open to the public. Tickets are $5 each. Concessions and inmate-made hobbycrafts will be sold during the matches. No outside food or drink will be allowed.

Patrons are reminded that it is a prison and there are some requirements that most boxing venues don’t have. One is that visitors must wear “proper attire” and cannot wear white T-shirts or denim shirts, so as not to be confused with inmates who wear those kinds of shirts, Milligan noted.

Vehicles will be searched upon entering the front gate. Cars will be parked in a designated area and visitors will be escorted to the gym.

If you like boxing, there should be something to suit your taste -- from fleet-footed, fast-fisted featherweights all the way to bone-crunching super-heavyweights.

It doesn’t matter if you think “Robinson” or “Leonard” when someone says “Sugar Ray” -- or even if your response is “Who’s that?”

“Battle on the Bayou” promises to provide an opportunity for the diehard fan and the never-been-before newby to watch a sporting event that is centuries older than baseball, basketball and football.

Milligan said the inmates train hard and take their sport seriously. It is not a no-holds-barred brawl.

While winning a fight and holding a title are important to the boxers, like any athlete they enjoy displaying their skills for fans of their sport.

Milligan said RLCC’s “Fight Night” event in May was well-attended. He is hoping for another good turnout for “Battle on the Bayou.”

“Each institution hosts two events a year,” Milligan said. “In addition to RLCC there will be five other institutions represented.”

Each fight consists of three 3-minute rounds -- not the 10, 12 or 15-round bouts seen in professional boxing.