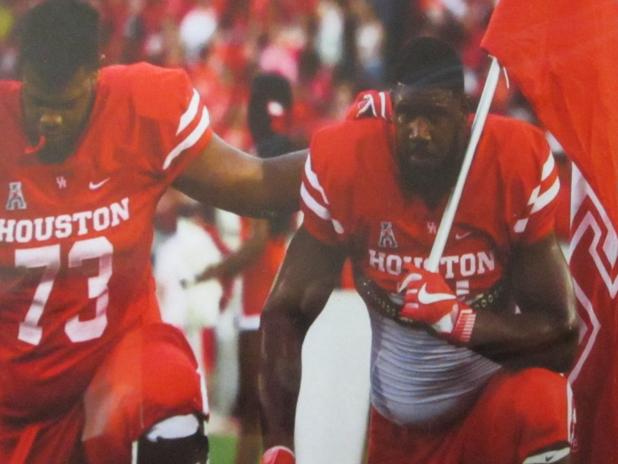 Brothers Marcus (left) and Ed Oliver Jr. pray before a University of Houston Cougars football game. The two men spent most of their childhood summers, holidays and weekends visiting their grandmother, Virginia Oliver, in Marksville. Ed, who decided to forego his senior year at UH, is expected to be a 1st round selection in this week’s NFL Draft. Marcus is a high school coach and personal trainer. {Photo courtesy of Ed Oliver Sr.}

Ed and Marcus Oliver lived in Houston most of their lives, but both say they consider Marksville a key part of their childhood. In fact, it was their home away from their Houston home.

Ed (also called EJ) was a standout defensive tackle for the University of Houston Cougars. He will probably be selected in the first round of the NFL Draft this Thursday and Friday (April 25-26). His older brother Marcus, who played offensive lineman for the Cougars, is coaching high school football.

Their father, Ed Sr., is a native and current resident of Marksville and a proud papa.

Ed Jr., 21, decided to skip his senior year to go to the NFL. However, he said, he plans to complete his degree in Health after he begins his career in pro football.

Marcus, 23, is also a personal trainer who has been considering playing semi-pro football next year.

Marcus said Marksville was always a special place for him and his baby brother -- and it still is.

“It’s a getaway from the city,” he said. “It has always meant a lot to us, even from an early age.”

“I wasn’t born in Marksville, but I always enjoy coming out there and relaxing,” Ed Jr. said last week. “We used to come over often and play with our cousins, just to get away from the city.

“It was always a lot of fun and such good food,” he continued. “I couldn’t wait to get there. In fact, I was in Marksville for Palm Sunday weekend.”

“The Saints wanted to set up a visit, but we couldn’t agree on a date,” he noted.

“My wife Cynthia was a teacher,” Ed Sr. said. “Every school holiday, summer vacation and about two weekends a month she would bring them over to visit my mother, Virginia.

“They loved spending time here,” Oliver continued. “That’s why they call Marksville home and not Houston.”

Ed Jr. has been featured on the cover of Sports Illustrated. ESPN did a television segment at the family home in Marksville.

SIMILAR BUT DIFFERENT
Ed Sr. said his two sons are similar in many ways, including their love of football, but they have very different natures. Those natures are reflected in their choice of football positions.

“EJ is outgoing and lives on the edge,” he said of his younger son. “He is always pushing to see how far he can go, how fast he can go.

“Marcus is more laid back and relaxed,” he added.

Marcus plays offensive guard, a position that requires the athlete to memorize many plays and maintain a great degree of discipline on the field.

As a defensive tackle, Ed Jr.’s job is to tear through the offensive line and chase down whoever has the ball.

“EJ” was the first sophomore to win the Outland Trophy -- awarded to the nation’s best college football interior lineman -- in 2017.

Ed Jr. could have gone to a large school such as Texas, Oklahoma, Texas A&M, LSU, Alabama or any number of major high-profile football schools. He was rated as the No. 6 overall recruit in the nation in 2016.

He decided to play for his hometown University of Houston.

“It was amazing being able to play on the same team with him,” Marcus said. “It was unreal. It was something we had always dreamed about as young kids.”

EJ was more direct in explaining his choice.

“My brother was at that school,” he said.

According to an NFL scouting report, Ed Jr. had 66 tackles with 22.5 tackles for a loss in his freshmen year. He sacked the quarterbacks five times, forced three fumbles and knocked down nine passes.

In his Outland Award-winning sophomore year he had 73 tackles -- 16.5 for a loss -- with 5.5 sacks, two forced fumbles and three passes batted away. Those stats were earned despite teams keying on stopping him.

In 2018, Oliver had 54 tackles with 14.5 tackles for a loss, three sacks, one forced fumble and two passes defended.

If the numbers look like he slowed down a step in his junior year, it should be noted that he missed four games with a knee injury he sustained in Week 8 against Navy.

He elected not to play in Houston’s bowl game to avoid a possible injury that could have affected his NFL draft prospects.

“He was going to break records this year, but he got hurt,” Marcus said.

In three seasons, he played in 32 games.

Marcus said he is not jealous of his brother’s chance to play in the NFL.

“He deserves it,” Marcus said. “He worked hard for it. I couldn’t be more happy for him.”

EJ said he will eventually own a chain of restaurants, and he already has plans to open one in Marksville.

“It will be something nobody has ever seen before,” he promised.

Avoyelles Parish cannot take credit for molding Ed Oliver Jr. into a pro-caliber defensive tackle on the high school gridiron, but “EJ” is not shy about telling anyone who will listen that it played a major part in molding him in to be the man he is.

It just goes to show that there are many ways a child can be influenced -- and loving families, close friends and a supportive community certainly play important roles.