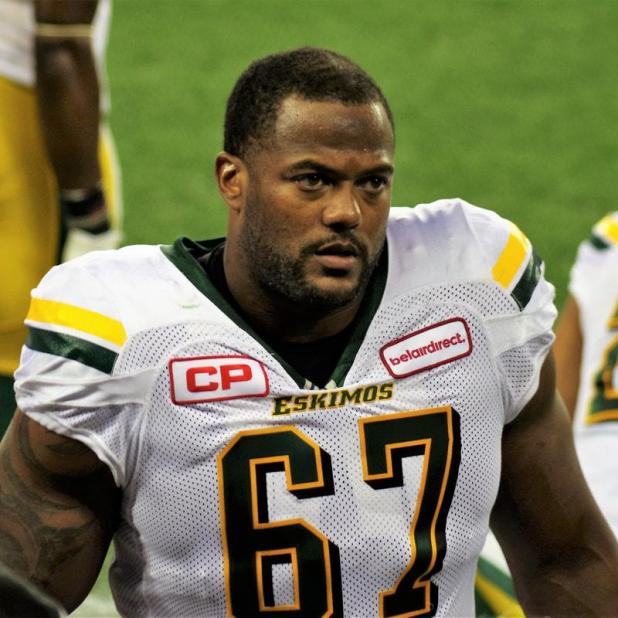 D’Anthony Batiste played football and played it well. He lived the American boy’s dream of playing high school football at Marksville High, college ball at the University of Louisiana-Lafayette and saw action with several NFL teams.

He found his greatest gridiron success “north of the border” in Edmonton, Canada, where he helped lead the Eskimos to a Grey Cup championship -- the Canadian Football League’s equivalent of the Lombardi Trophy awarded to the league champion.

Now the 36-year-old Marksville native has left the offensive line as an active player to return to the U.S. as the Oakland Raiders’ assistant coach for strength and conditioning.

He isn’t the first or only parish son to play in the NFL, but he is the first to be named to an NFL coaching staff.

The appointment became effective March 1 and he is settling in with his new team and his new responsibilities nicely.

“It’s been awesome,” Batiste said. “It’s great to be back on American soil and back in the NFL.”

Batiste said he is also happy to be with a team he hopes he can help win the Super Bowl.

“That would validate me as a coach,” he added.

Batiste is also glad to be a little closer to home. His parents, Dorothy Batiste and Mickey Batiste, both still live in Marksville.

“I was in Marksville for Christmas,” Batiste said. “You know I couldn’t go through Christmas without getting some good old cracklins and boudin to hold me over. I’m a country, Cajun boy and always will be.”

One good thing about his move to Oakland is that he had at least one familiar face to greet him there.

“I trained under Tom Shaw since I was still in high school,” Batiste said. “I started with him in 1999.”

During his years at ULL and with various NFL teams, he continued to train with Shaw.

Shaw is now the Raiders’ strength and conditioning coach.

Batiste worked in the NFL for seven years on seven teams, sometimes only on practice squads and during pre-season. Those seven teams were the Dallas Cowboys, Carolina Panthers, Atlanta Falcons, Washington Redskins, Denver Broncos, Arizona Cardinals and Pittsburgh Steelers.

Batiste joined the Edmonton Eskimos in 2014. In 2015, the Eskimos’ title year, Batiste was a West Division All-Star at right tackle.

The title game against the Ottawa Redblacks, which Edmonton won 26-20, had several memorable moments for Batiste. The one that stands out, though, “is being able to hoist a trophy over my head for the first time in my football career. To stand there and be a champion.”

In his four years with Edmonton, he played in 56 games.

Batiste actually ended his days as a player where they began.

After one season with an Arena Football minor league team in Shreveport-Bossier in 2004, Batiste went north -- way north -- to Edmonton in 2006. He played two pre-season games for the Eskimos and then was cut from the team.

“Edmonton did me a favor by cutting me,” Batiste said. “They let me go so I could pursue a career in the NFL. They didn’t have to do that. They had me under contract.”

Batiste was signed by the Dallas Cowboys -- his favorite team when he was growing up -- in June 2006 and was placed on the practice squad. He was signed by Carolina in October 2006, released from the team in September 2007 and picked up by Atlanta the next day.

He played with the Redskins in 2009, appearing in eight games.

He spent 2010 on the Broncos practice squad and was released in October 2010.

Arizona signed him for the 2011 season to replace an injured player and then started 10 games in 2012 before being replaced.

He was with the Steelers in August 2013 before being released and signing with Edmonton in 2014.

“Going back to Edmonton at the close of my career was my way of doing homage to the team that really gave me my start in professional football,” he said.

While in Edmonton, Batiste started his own personal fitness practice. His business’s slogan was the same as his personal motto -- “Strive to be better tomorrow than you are today.”

Batiste said the Ragin’ Cajuns of ULL were a good team while he was there, but “we never made it to a bowl game. I was a four-year starter.”

At ULL Batiste earned second-team All-Sun Belt honors as a senior in 2003.

He was a member of the Marksville High football team, playing offensive lineman, tight end and defensive end.

He said he had a lot of talented teammates and credits coach Benny Brouillette with “making me the best I could be” on the football field.

While Batiste fondly remembers his past years in football, and is excited with the challenges in his present position, he is also looking forward to future success in football.

“Coaching is my passion,” he said. “I decided to retire as a player, not because I couldn’t contribute any more but because this was the best coaching opportunity presented to me.

“To be hired as an assistant coach in the NFL as your first coaching position is amazing,” he added.

At this time, his long-range goal is to continue to progress on coaching staffs in the NFL, “preferably with the Raiders organization, but I will go with the best opportunity presented.”

He said he hopes to someday be the strength and conditioning coach for a NFL team.

“Maybe I would go back to the football side of coaching,” he said, speaking of the track that might someday lead to a head coach position, "but for now I believe my calling is in the area of strength and fitness.”

WHAT YOU DON'T KNOW

There are a few things most people don’t know about D’Anthony Batiste -- and maybe a few he would prefer they not know. Here are just a few “fun facts” about the Raiders’ new assistant coach for strength and fitness.

While he would have preferred a football championship on his resume at ULL, Batiste did leave Lafayette with one title to his credit. He de-throned the three-year champion in a hot wing eating contest.

“I did the no-return habanero wings challenge at Hooters and I smoked my competition by, like, five minutes,” Batiste said. “I grew up in Louisiana. I’m a Cajun boy. So, I can handle spicy food.”

Batiste’s first sports jersey wasn’t from the Saints, Cowboys or LSU, as one might expect. It was #23 -- Michael Jordan.

“I was a Chicago Bulls fan growing up, so I definitely owned a Jordan jersey,” he said.

On a more somber note, Batiste was a Lafayette Parish Sheriff’s Office deputy when Katrina struck New Orleans and southeast Louisiana. He saw a lot of action in delivering aid and helping those uprooted by the killer storm.

“It was a dramatic experience,” he said. “Seeing it from the aid side of things is an experience that I take into football and it keeps me humble. I can see the other side of the fence.”

Seeing Batiste as a man who has spent much of his working years in major cities in the U.S. and Canada, one might be forgiven for forgetting the athlete’s rural roots.

He said he grew up on a farm, “slopping hogs and feeding chickens” on a gravel road.

“We had cows, chickens, rabbits, sheep, whatever you can think of,” he said. “We pretty much lived off of what we raised.”

So, the question everyone is dying to know the answer to.

What was his favorite Halloween costume?

It wasn’t a football player. It wasn’t Hercules, Conan or Samson.

The best Halloween costume EVER was -- “Big Bird.”