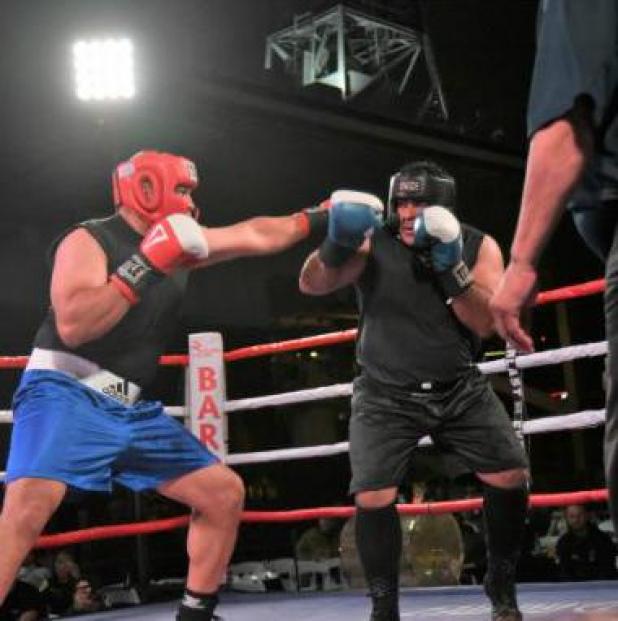 Deshautelle uses fists to benefit others

At 51, most may think Anthony Deshautelle is a bit too old for the boxing ring.

Crossing the half-century mark hasn’t stopped the Marksville native from claiming the state Battle of the Badges (BoB) heavyweight boxing title. It also won’t keep him from traveling to Monroe to fight a California BoB champ tonight (Aug. 17) in a charity fundraiser in the Monroe Civic Center.

Police and firefighters from across the South will be in Monroe for the charity boxing matches to raise funds for MedCamps Louisiana -- a free one-week camp for 5,000 children in the state with severe illnesses and disabilities.

He stands 6-3 and weighs 240 pounds. He has been representing Alex-andria P.D. in boxing competitions since he joined the department in 2007. His first BoB bout was in Monroe in 2007.

Since then, he has won several belts across the country in “Battle of the Badges” and “Guns and Hoses” events.

The latter pits police officers against firefighters in a traditional good-natured rivalry.

“I’ve competed at nationals in St. Louis and won championships there,” Deshautelle noted. “It’s been great.”

The August bout will be Deshautelle’s second of the year -- and the second of this summer.

He went to San Diego, in June for a “Battle of the Badges” event on the deck of the USS Midway -- a long-serving aircraft carrier converted into a Naval history museum.

That event included boxers from the U.S. Border Patrol, the Navy, the Marines, San Diego police and fire departments and other law enforcement/firefighting units.

His first stop in San Diego was not the sparring ring, but that youth center.

“What I noticed when I got there, there was a border patrol agent in uniform helping work with the kids. He was in the ring – in uniform – working with them,” Deshautelle said. “And then a San Diego police officer arrived and did the same thing. “

Deshautelle said that is what he tries to do in the Alexandria center.

Deshautelle went to Los Angeles when he was 20 and worked on the West Coast for 18 years.

“I had several jobs,” he said. “I worked in security, was employed by LA Gear and then worked as a personal trainer.”

During his time in L.A., he learned to box. He competed as an amateur boxer, but a hand injury put the brakes on any hope of a boxing career.

Something was drawing him to come home, so he decided to leave L.A. and come back to LA.

“Being a police officer is something I always wanted to do,” Deshautelle said.

“When I moved back from California, I wanted to do something where I could make a difference in my community where I’m from,” he said.

One of his three brothers in Marksville, City Councilman Clyde Benson, was a career law enforcement officer “and is the one who got me started in law enforcement,” he said.

His other brothers are Nolan Benson and Nathaniel Deshautelle.

“I grew up in Holy Ghost Church,” Deshautelle said. “I come home and go to church there at least once a month.

Deshautelle began his police career in Marksville and joined the Alexandria P.D. about a year later.

“After two years in patrol, I got an opportunity in community policing,” he said. “That offered me a chance to see what I can do to help out in our tougher areas.”

That includes working with youth at the Alexandria Youth & Teen Center.

“Working with Parks and Recreation, I can do a lot of what I came here to do,” Deshautelle said. “It’s a great fit for me.

“We interact with the kids and let them know we care.” he continued. “We let them see we’re someone’s mom or dad. It takes awhile for them to warm up to us, but they do.”

One thing he enjoys is the ability to share his boxing skills and life lessons with the youth.

“Boxing is like life – you get knocked down and you have to get back up,” Deshautelle said. “Stepping through those ropes prepares you for challenges.”

Deshautelle enjoys the competition. While he always fights to win, he said winning isn’t the most important reason he participates in BoB events.

In fact, he said he doesn’t keep track of his won-lost record.

“I enjoy the camaraderie,” he said. “We’re all trying to raise money for whatever charity is out there.”

Deshautelle has been unable to defend his BoB heavyweight title over the past three years because there has been no challenger. He thought about vacating the title, but will hold onto it and defend it when a challenger steps up.

“That’s why I started going out of state to attend events,” he added. “There were no opponents here.”

Battle of the Badges “is about supporting local charities and honoring fellow police officers,” Deshautelle said.

He donates any title belt he wins in memory of fallen police officers.

Two of his belts are on display at APD headquarters.

“I want to let people know we remember these guys; let them know they are not forgotten,” Deshautelle said.

A particular officer on his mind is Baton Rouge Deputy Nick Tullier, who is still battling from wounds received in an ambush that killed three Baton Rouge police officers in 2016.

For those who might want to attend to give their support to the Avoyelles Parish native son, general admission tickets for tonight's 15th Annual Battle of the Badges event in Monroe are $12. Reserved seating tickets are $25. VIP seating is also available. The matches begin at 6 p.m.

More information is online at http://battleofthebadges.com.

{The City of Alexandria’s Office of the Mayor provided much of the information in this article.}