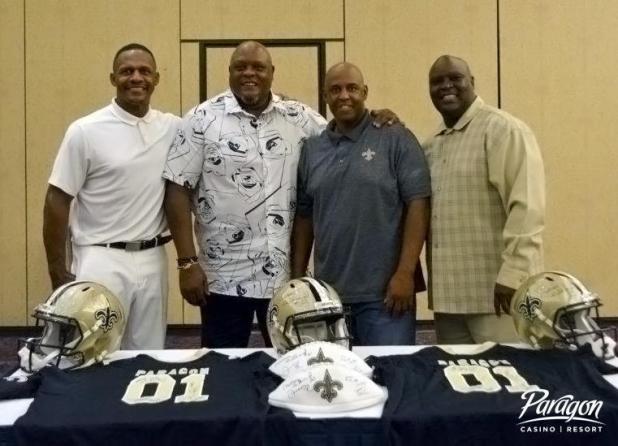 If you were a Saints fan 20 to 30 years ago, you probably would’ve seen one of your favorite players at the Paragon Casino Resort on Aug. 4. Four fan favorites from past Saints squads were on hand to sign autographs, footballs and anything else handy.

There were two offensive heroes from the 1980s, running back Dalton Hilliard and wide receiver Eric Martin.

There was return specialist and cornerback Tyrone Hughes, who played most of the 1990s.

And then there was wide receiver Joe Horn, whose career straddled the end of one century and the beginning of the next.

Hilliard was born in Patterson and played for LSU. He played all eight of his pro seasons with the Saints, making him that rare lifetime football player who spends his high school, college and pro careers in his home state.

ERIC MARTIN
Eric Martin was a receiver who was considered too slow for the pros, but ended up being one of the most productive receivers in Saints history. From 1985-94 Martin played in 148 games, caught 553 passes for 8,161 yards and 49 touchdowns.

He was born in Texas but played football at LSU. He played nine pro seasons with the Saints and his last season in Kansas City.

TYRONE HUGHES
Tyrone Hughes was born in New Orleans but went north to Nebraska to play college ball. He came home to the Big Easy to play for the Saints for four seasons, then went to Chicago for one year and played only four games in his last season with the Dallas Cowboys.
He was a cornerback who intercepted four passes in his pro career from 1993-98, but made his mark on the game as a kickoff and punt return specialist.

Horn was born in New Haven, Conn. and played at Itawumba Community College in Mississippi.

In his 163 games he caught 603 passes for 8,744 yards and 58 TDs. He played his first four years at Kansas City, then seven years with the Saints before finishing his career with a season in Atlanta.

Horn may have summed up the feeling at the event when he said “It’s all love.”

Horn said the people of Louisiana love the Saints and always have -- win or lose. That feeling is a two-way street for the players. He said he always loves coming back to Louisiana and spending time with those faithful fans of past Saints teams and of today’s version of the Black and Gold warriors.