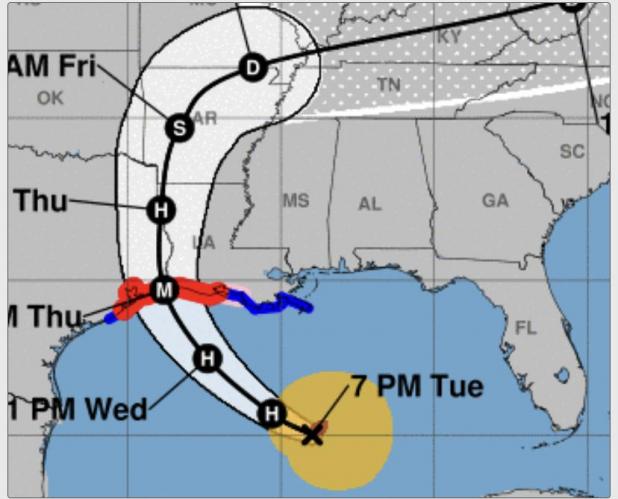 Hurricane Laura's projected path as of 8 p.m. Tuesday. The storm will strike near the Texas-Louisiana border Wednesday night or early Thursday morning with sustained winds of 115 mph. It will be even with Avoyelles Parish at about 7 a.m. Thursday with Category 1 hurricane winds of 86 mph. The path will veer eastward near Shreveport as a tropical storm with sustained winds of 52 mph. {AccuWeather.com map}

Laura's path moves westward, will still be hurricane as passes near Avoyelles

As of 8 p.m. Tuesday, Hurricane Laura's projected path had moved even more westward, close to Beaumont, Texas. Forecasters are predicting the storm will make landfall as a Category 3 hurricane, with sustained winds of 115 mph and gusts of up to 132 mph.

Projections indicate Avoyelles Parish will not take a direct hit from the storm, but will be close enough to have some impacts from high wind and heavy rain during the day Thursday. Laura will still be a Category 1 hurricane when it passes due west of Avoyelles at about 7 a.m. Thursday Along the Sabine River valley. At that point, Laura would be packing sustained winds of 86 mph with Category 3 gusts of 115 mph.

The storm will veer to the east towards Shreveport at about 7 p.m. Thursday as a tropical storm with sustained winds of 52 mph and gusts up to 63 mph.

Over the past 24 hours the hurricane's path has shifted ever more westward, which is good news for South and Central Louisiana, but bad news for the Texas Gulf Coast between Galveston and Corpus Christi, who are coming closer to the storm's crosshairs as the Bayou State gets farther away from them.

Avoyelles residents are cautioned to maintain caution and monitor the weather over the next 24 hours and to be prepared in the event Laura's projected path moves back to the east towards us.

Avoyelles could experience tropical storm-strength winds when Laura strikes Wednesday night or Thursday morning. From about 10 pm Wednesday until daybreak Thursday, sustained wind gusts are predicted to be at above 30 mph in Avoyelles Parish.

A tropical storm warning remains in effect for Avoyelles Parish. Here is the latest Tuesday night post from the National Wether Service for Avoyelles:

- THREAT TO LIFE AND PROPERTY THAT INCLUDES TYPICAL FORECAST UNCERTAINTY IN TRACK, SIZE AND INTENSITY: Potential for wind 58 to 73 mph - The wind threat has remained nearly steady from the previous assessment. - PLAN: Plan for dangerous wind of equivalent strong tropical storm force. - PREPARE: Remaining efforts to protect life and property should be completed as soon as possible. Prepare for significant wind damage. - ACT: Move to safe shelter before the wind becomes hazardous.

- POTENTIAL IMPACTS: Significant - Some damage to roofing and siding materials, along with damage to porches, awnings, carports, and sheds. A few buildings experiencing window, door, and garage door failures. Mobile homes damaged, especially if unanchored. Unsecured lightweight objects become dangerous projectiles. - Several large trees snapped or uprooted, but with greater numbers in places where trees are shallow rooted. Several fences and roadway signs blown over. - Some roads impassable from large debris, and more within urban or heavily wooded places. A few bridges and access routes impassable. - Scattered power and communications outages, but more prevalent in areas with above ground lines.

- THREAT TO LIFE AND PROPERTY THAT INCLUDES TYPICAL FORECAST UNCERTAINTY IN TRACK, SIZE AND INTENSITY: Potential for moderate flooding rain - The flooding rain threat has remained nearly steady from the previous assessment. - PLAN: Emergency plans should include the potential for moderate flooding from heavy rain. Evacuations and rescues are possible. - PREPARE: Consider protective actions if you are in an area vulnerable to flooding. - ACT: Heed any flood watches and warnings. Failure to take action may result in serious injury or loss of life.

- THREAT TO LIFE AND PROPERTY THAT INCLUDES TYPICAL FORECAST UNCERTAINTY IN TRACK, SIZE AND INTENSITY: Potential for a few tornadoes - The tornado threat has remained nearly steady from the previous assessment. - PLAN: Emergency plans should include the potential for a few tornadoes. - PREPARE: If your shelter is particularly vulnerable to tornadoes, prepare to relocate to safe shelter before hazardous weather arrives. - ACT: If a tornado warning is issued, be ready to shelter quickly.

- POTENTIAL IMPACTS: Limited - The occurrence of isolated tornadoes can hinder the execution of emergency plans during tropical events. - A few places may experience tornado damage, along with power and communications disruptions. - Locations could realize roofs peeled off buildings, chimneys toppled, mobile homes pushed off foundations or overturned, large tree tops and branches snapped off, shallow-rooted trees knocked over, moving vehicles blown off roads, and small boats pulled from moorings.