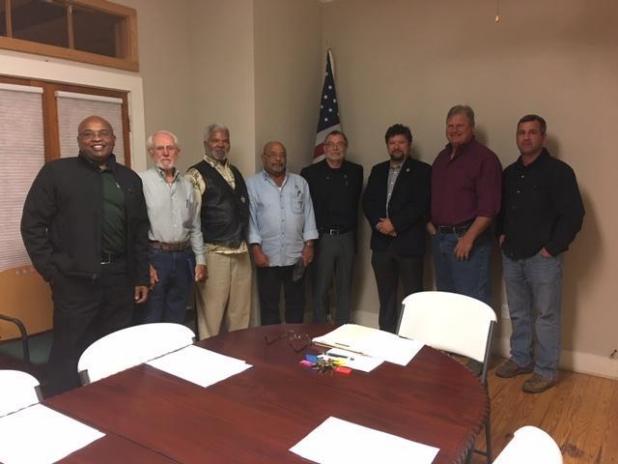 Recently appointed Avoyelles Port Commission members were sworn into office on Feb. 17. From left, are Tony Pierite, Penn Lemoine, James Sampson, Sullivan “Butch” Batiste, Barry Laiche, State Rep. Daryl Deshotel, Scott Williams and Patrick Deshotel. Not pictured is Bryan Naquin, who will represent the Bunkie area in Police Jury District 8. There is a vacancy in Police Jury District 5, which includes part of the Marksville area, that will be appointed in the near future. {Photo provided by Barry Laiche}

There will be six new and three returning members of the Avoyelles Port Commission for the next four years.

The way of selecting Port Commission members was changed a few years ago when state Rep. Robert Johnson had legislation passed to require a member from each of the nine Avoyelles Parish Police Jury districts. The stated reason for the change was to make the port a parishwide entity instead of, basically, a Simmesport port.

State Rep. Daryl Deshotel, who was elected to succeed Johnson -- who could not seek re-election due to term limits -- has announced an intention to once again change the way commissioners are appointed. The commissioners receive no pay for serving. The details of those proposed changes have not been completed, he said.

There is one vacancy on the board. Clyde Benson was appointed to represent Police Jury District 5, but found out he must decline the appointment because he is an elected alderman on the Marksville City Court. The rules for the commission prevent elected officials from serving.

A replacement will be appointed in the near future.

Seven of the eight commissioners were sworn into office during a ceremony this past Monday (Feb. 17). Naquin was unable to attend the event.

At a Police Jury meeting in January, Deshotel said he was not sure the appointment procedure is efficient.

The process calls for each juror to nominate three members from their election district. The representative and two state senators serving areas of Avoyelles Parish then choose that district’s commissioner from those three nominees.

Deshotel joked that since the law only says jurors have to submit three names, they could “submit the same name three times.”

He said it would be simpler for each police juror to nominate one person from his district, who would then be the commissioner from that district.

Deshotel also said Avoyelles’ two senators -- neither of whom live in this parish -- have indicated they would agree to be removed from the process to make it simpler and quicker.

There was also a comment that the terms should be staggered rather than all expiring at the same time. That would require legislation to amend the current terms so that some expire sooner than four years.

If that were to be done, those selected to serve a “short term” would come up for reappointment in two or three years. The commissioner appointed at that time would serve for four years, with a term expiring after the next group of commissioners’ terms expire.

That would ensure that some returning commission members would be on the board and prevent the entire commission from being removed at one time.