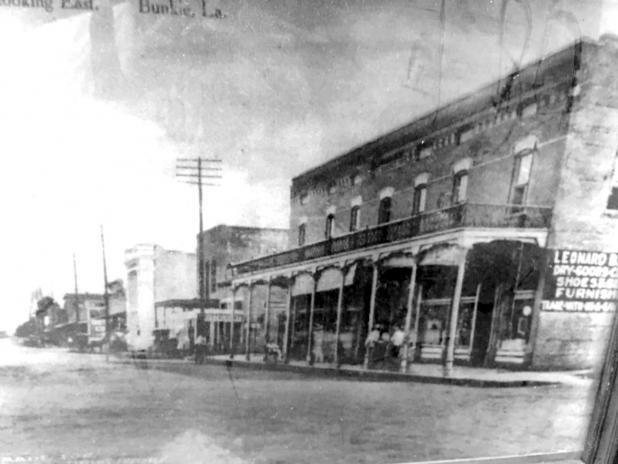 1920s BUNKIE
Bunkie’s Main Street was thriving in the 1920’s. The Palace Hotel, the light-colored building in the center of the photo, is the building recently donated to the City of Bunkie for downtown civic improvements. It has also housed several businesses over the year but is currently vacant. {Photo courtesy of Tommy McNabb}

Usually a donation of property to a local government is gratefully accepted.

However, a recent gift of an abandoned building on Bunkie’s Main Street has some City Council members complaining the donated property is more likely to be a burden than a benefit to the municipality.

They are afraid the gift may turn out to be a goof.

The City Council accepted the donation from James and Jennifer Mixon at its Feb. 14 meeting.

Mayor Bruce Coulon told the council at the meeting that there is no asbestos in the building. An application for an $8,000 grant has been submitted to begin the process of turning the site into an art gallery/museum to display local artists’ work.

Coulon said his thought is to create an a trium, similar to the one behind the courthouse in Marksville. If the site has a roof, it would be able to have the art display. If that is not feasible, it would be an open-air area with walls on two sides and gated entrances in the front and back, he said.

Once renovated, the center could also be rented for receptions and community events

Coulon told council members he will appoint a committee to “see what we can do to make it work.”

Since the meeting, Thomas has changed his mind and now says the building will be a burden on Bunkie taxpayers.

Coulon contends this is an opportunity to take an abandoned building and return it to the citizens for public use.

For many decades, the building housed the Palace Hotel, which served the many train passengers using the Bunkie Depot on Main Street. In more recent years, the two-story building was once a flower shop and a jewelry store.

There is no question that it will take more than just a small grant to turn the vacant structure into a community center, but Coulon believes the building holds potential.

The mayor said his plan does not involve spending any public funds. All work would be funded by grants.

However, before significant grants can be requested, the city would have to have the property available and have detailed plans as to what would be done with the grant funds.

Coulon said an application for a USDA grant for the project is due by March 29. The city will learn in May if the grant will be awarded. He is also looking at one or two more grant sources.

“This is not the first building that has been donated to the city,” Coulon said. “The Capital One Bank on Main Street was donated to us. Capital One also donated its branch building on Walnut, which is now the library.”

“Main Street Revitalization” has been a theme of several public discussions on possible ways to improve Bunkie.

The Mixon donation is considered to be a possible project in that overall campaign.

Coulon said he sent letters to owners of three closed businesses on Main Street, telling them to clean-up their buildings. He noted in the letter that if they were willing to donate the building to the city, the council would consider accepting the donation.

Mixon, a former city court judge, is the only one so far that responded by offering to donate the building to the city.

Longoria noted at the meeting that he didn’t want the city to take on the headaches of dilapidated buildings so the owners wouldn’t have to be responsible for repairing or removing the structures.

Coulon said the only buildings that would be eligible for the donation program are those behind City Hall on Main Street.

Longoria and Thomas are concerned that if the grant-funded idea falls through, the city will need to step up and pay the cost to clean-up the site.

The municipality will be seeking estimates from several contractors on the cost of gutting the building, ensuring the walls are stable, determining whether the roof should remain or be removed, etc. Once the cost of the project is known, the grant applications will be finalized and submitted.

The mayor said he is working on finding a public use for the donated Capital One Bank building on Main Street.

The Avoyelles Police Jury and Library Board have approved a plan to expand the Bunkie branch on Walnut by enclosing the former drive-thru area to become a community room for meetings, programs and other events.