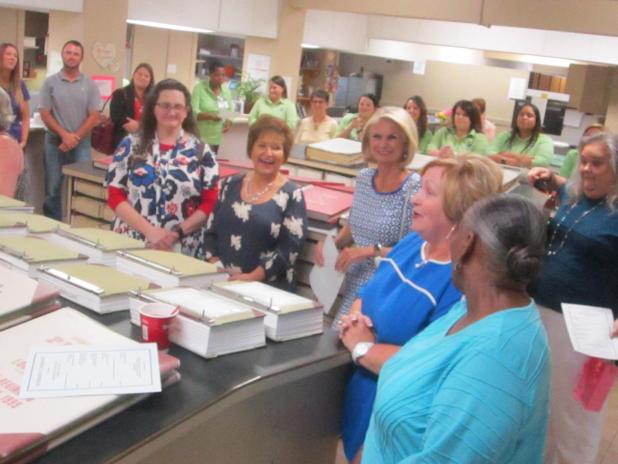 CONNIE SAYS GOODBYE
Connie Couvillon (2nd from right) addresses a crowd of well-wishers at a retirement reception held in the Clerk of Court’s Office on (July 2.
Couvillon served 37 years in the clerk’s office, with the past seven as the elected clerk of court. Chief Deputy Clerk Connie Desselle (not pictured) was sworn in July 3 as interim clerk until a new clerk is elected this fall and takes office July 1, 2020.

Couvillon retires as Avoyelles clerk of court; Desselle sworn in as interim clerk

For the last few decades when you called the Avoyelles Clerk of Court’s office and ask for Connie, the common reply was “which one?.” Besides their same first name, Connie Couvillon and Connie Desselle in many ways have shared the same career path at the office. Both have decades of tenure. Now, after 37 years, Connie Couvillon has retired after her own tenure as the elected clerk and has handed over the keys to the other Connie.

This past Tuesday (July 2) Couvillon bid farewell to the office, her staff and the public as she retired with one year left on her second elected term of office. The following day, Desselle was sworn in as Clerk of Court for the remainder of Couvillon’s term.

Couvillon took time to reflect on her time in the office which occupies most of the first level of the Avoyelles Courthouse.

“In looking back over those years, I believe what I will remember most are all the friends that I have made within the community and seeing this office grow in so many ways,” Couvillon said. “I will also treasure the friendships I have made with clerks across the state.”

At last Tuesday’s reception, state Rep. Robert Johnson presented Couvillon with a replica of a the State Capitol’s front doorknob.

Several current and past political officeholders, her friends, family and courthouse employees also dropped by to wish her a long and happy retirement.

Couvillon began her career in the Avoyelles clerk’s office as a deputy clerk under long-time Clerk of Court Sammy Couvillon (no immediate relation) in 1982. She became “Sammy’s” chief deputy in 2005.

When Sammy Couvillon retired, Connie sought the office and was elected in the Fall 2011 election.

Like Sammy before her, she has endorsed her chief deputy -- Connie Desselle -- in the election for a new clerk of court.

That election, which currently has three announced candidates, will be Oct. 12. A run-off, if necessary, will be Nov. 16.

“I can truthfully say that I leave office knowing it is in excellent hands,” Couvillon said. “I know Connie Desselle
will do a very capable job of handling the day-to-day responsibilities of this office.”

Desselle was sworn in as interim clerk of court on Wednesday to serve out the remaining year until the next term up for election this fall begins on July 1, 2020.

Couvillon said she has seen many changes over the past 37 years in the way the clerk’s office operates.

One thing in Couvillon’s life will remain just the same as it has been for the past 37 years.

“I married Craig a month after I started working here,” Couvillon recalled. “That’s not going to change.”

The Couvillon's live in Simmesport, where they have been lifelong residents.

Connie said she plans to travel, visit friends and family and spend time with her grandchildren, 1 1/2-year-old Landon and 5-month-old Ellen.

The Couvillon's’ son Logan and his wife Jacqueline live nearby in Borodino.