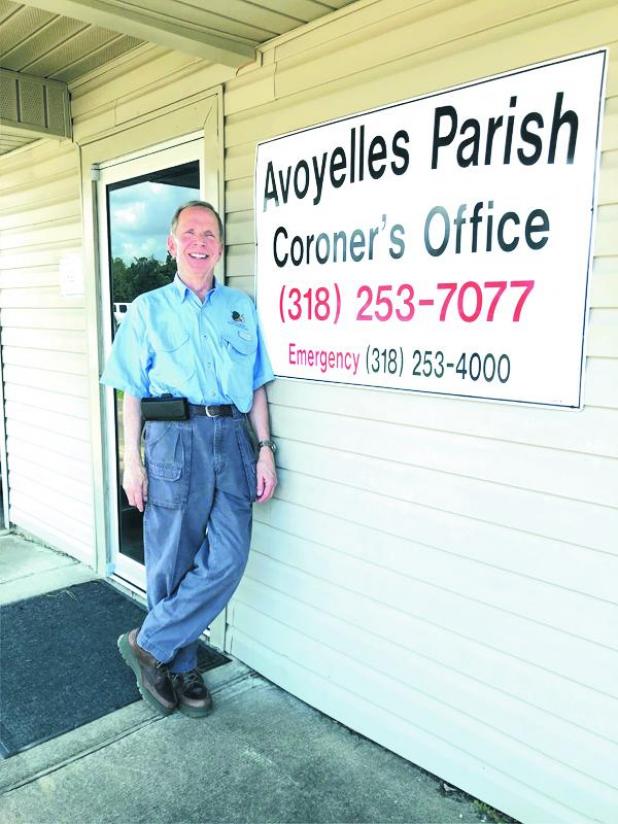 Dr. L.J. Mayeux is retiring after 28 years as the elected coroner of Avoyelles Parish. He also served 11 years as chief assistant coroner before succeeding F.P. Bordelon as coroner in 1991. {Photo by Tiffany Trichell}

There was a major surprise when candidates qualified for offices on the Oct. 12 ballot. For the first time in 28 years, the name “L.J. Mayeux” will not be on the list of candidates for Avoyelles Parish coroner.

After serving 39 years in the coroner’s office -- 11 as chief assistant coroner and 28 as the parish’s head medical officer -- Mayeux decided to let someone else take over the tremendous duties and responsibilities of the office.
After qualifying ended Thursday afternoon, Dr. James Bordelon Sr. of Bunkie was the only candidate for the position and will be the new coroner when Mayeux's current term ends.

Mayeux said leaving the coroner’s office will “give me more time to travel, more time in the duck blind and deer stand without being interrupted and more time to spend on my hospice work.”

He said he will continue to be available as a consultant for the new coroner if needed.

Mayeux was born and raised in Moreauville and is a graduate of Moreauville High -- which is now the site of the consolidated Avoyelles High.

He received his bachelor’s degree in chemistry from LSU and graduated from LSU Medical School in 1977.

After working at Earl K. Long Hospital in Baton Rouge for three years, Mayeux returned to Avoyelles Parish to open his private practice.

“I was Dr. F.P. Bordelon’s only assistant coroner,” Mayeux said.

When Bordelon chose not to seek re-election in 1991, Mayeux succeeded him in the office.

Prior to Mayeux’s 28-years as coroner, Dr. Henry J. Kaufman -- F.P. Bordelon’s predecessor -- held the distinction as the longest-serving coroner with 25 years in the office, from 1950-1975.

Mayeux said most people mistakenly believe a coroner “only deals with the deceased. Only 12-14 percent of what the coroner does deals with death.”

“I have to say that the evolution of the mental health crisis and the drug epidemic have been the two biggest challenges facing the coroner’s office in my time as coroner,” Mayeux said. “That has been made worse by the lack of resources allocated to the parish and the state to address mental health needs and drug addiction problems.”

He said Roseada Mayeux handles the paperwork and much of the mental health aspect of the office.

She schedules sanity hearings, requests for medical records, death certificates, scheduling exams of abuse victims and many other tasks necessary for the orderly operation of the coroner’s office.

There have been numerous tragedies that required his attention -- homicides, suicides, accidents, etc.

One of those “unsolved mysteries” that he had hoped would be resolved before he retired was the 2011 murder of Christine Mayeaux.

“Nobody has ever been brought to justice for the murder,” he said.

There were six primary suspects in the murder. Only one, Jared Tidwell, was convicted of a crime related to the murder. He was sentenced to 30 years in prison for cleaning up the murder scene.

Of the other five suspects, one committed suicide and one was killed by U.S, Marshals in an unrelated case. Another has been arrested on unrelated charges over the past eight years.

“Maybe there has been justice in the case, after all,” Mayeux added.