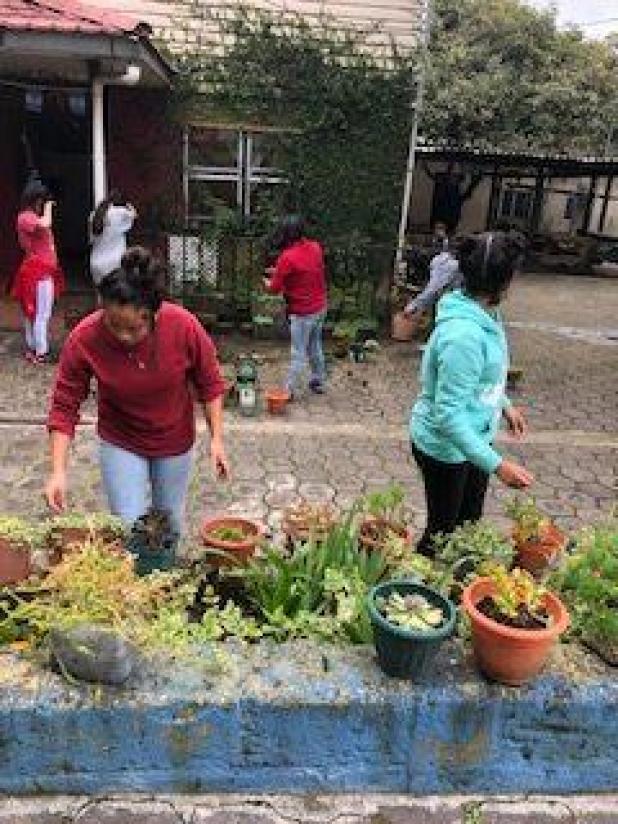 AFTER THE STORM
Children at the Casa Aleluya orphanage in the Guatemalan highlands plant flowers and clean up the grounds after Hurricane Eta passed through Guatemala Thursday and Friday. Eta knocked down a tree, but the center was spared serious damage. {Photo from Mike Clark's blog}

It now looks like Louisiana and Texas can breathe a little easier as Hurricane Eta -- now a tropical storm approaching Cuba -- is no longer expected to head west next week. The current projection would have the 2020 season's 28th named storm passing through the Florida Keys and then heading toward the Panhandle. Eta is projected to weaken to a tropical depression by Thursday near Tallahassee and make landfall near Apalachicola on Friday and pass by Tallahassee as a tropical rainstorm early Saturday morning before entering Georgia.

Hurricane watchers caution that the storm's path and intensity is still uncertain because it is not known what effect the landfall in Cuba will have. If the storm stalls south of Florida, it could spin toward the Bahamas and Bermuda. If it doesn't, it should enter the Gulf and follow the projected route.

The northward turn was what Louisiana officials would happen late next week when Eta was previously expected to be due south of New Orleans on a course for the Texas coast between Corpus Christi and Galveston.

The storm struck Nicaragua this past Tuesday as a Category 4 storm with 150 mph winds. It weakened to a tropical storm as it entered Honduras and then Guatemala and finally through Belize before returning to the Caribbean Sea Friday. During those days in Central America it unleashed torrential rains with catastrophic results.

Mudslides and flooding left at least 200 people dead in Eta's wake. A mudslide in Guatemala buried 150 homes. The death toll may climb as aid workers are able to reach remote areas due to storm damage and flooded roads.

Many in Avoyelles Parish are no doubt concerned about the Casa Aleluya orphanage operated by Bunkie natives Mike and Dottie Clark.

On Tuesday, Mike Clark noted in his daily blog that "Hurricane Eta is aimed at Central America and some coastlines are flooding. The rain will be very strong, coming all the way into Guatemala. Only one other time did we have this type weather with this much rain and wind. We are high in the mountains but our danger will be land slides."

On Wednesday he noted the "hurricane brought bad weather to Honduras and Nicaragua, but only frigid air to Guatemala."

That situation changed by Friday, when he posted: "The rains did come and there were two landslides with one killing over 150 people in Coban and an unknown number in Isabel. Helicopters are being used to rescue those on roof tops."

While there was a lot of rain at the orphanage and the storm "took down one of our trees. The teen girls planted hundreds of flowers and washed all of the cars. The boys cut up the downed tree so we could move it."

Eta has reminded the Central American countries of Hurricane Mitch, which followed a similar path to Eta in 1998 and killed 11,000 with floods and mudslides.