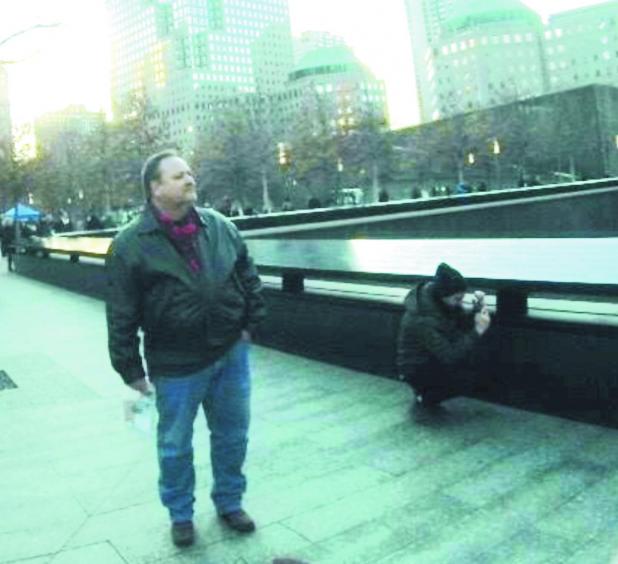 Brent Villemarette pauses by the 9/11 Memorial Fountain in New York City. The fountain, located at the site where the World Trade Center buildings collapsed, has the engraved names of those killed in the attack. Villemarette worked with the Red Cross at "Ground Zero" for three weeks after the Sept. 11 terrorist attack.

Hessmer native helped to heal the pain in New York

It’s hard to believe that any one who’s 18 years or younger has absolutely no reference point for Sept. 11, 2001. For the rest of us it’s the day a line was drawn in the sand, the before and after of our safe lives.

While most of the known world was glued to TVs for the latest on the unspeakable horror unfolding in New York City, some were called to action.

So it was with Brent Villemarette, who was born and raised in Hessmer. His father, Melvin, served as chief of police there.

Brent is a mental health professional with a lot of initials after his name. He could add to those letters NYC with out blinking an eye.

“I was called to ground zero by the Red Cross to help with mental health counseling for the emergency workers, firefighters, police and volunteers,” he said.

All those who worked in the trenches were flooded with emotions and sights that wouldn’t, couldn’t go away.

“It was a lot of listening,” Brent remembered. “They were longing to talk to someone.”

At one point Brent was speaking to a fireman and “right behind his shoulder” Brent recalled, “I could see the Statue of Liberty.”

It was his first view of the iconic symbol but he certainly couldn’t enjoy it.

The mental health workers were housed in a hotel in midtown which required a subway trip to ground zero.

“There were three respite centers,” Brent said. This was where emergency crew members could shower, eat, rest and where donated items were brought.

“The first one I served in was where the North Tower had been,” Brent said.

The shifts were as long as 12 hours or longer; “we were constantly hearing stories.”

Probably the worst was how these men and women who were working the fire “could see people falling from the building.” They were also dealing with survival guilt, ‘Why am I here....”

“We had to be debriefed and couldn’t go back to NYC until January or February.”

On his second tour of duty, Brent was assigned to the Family Center. “It was in an old bank building by city hall.

“Mental health had its own area and a special cell phone. if a family member wanted to go to the site I arranged it. A car from the mayor’s office came and picked us up.”

According to Brent, family members brought all kinds of items to leave in their loved one’s memory.

“This one lady had a son who died and she said every year he’d call her to make a special cake for his birthday. She left a piece of his birthday cake there.”

The memorial for those who died that day was built on the site of ground zero and Brent reported that it’s done very well.

Brent commented how he knew what the spot was like back then and how it is now.

The museum is “well-designed and like a journey,” he explained. It’s mostly underground and is six or seven floors and goes to bedrock.

Because most of the buildings were pulverized there weren’t a lot of items to salvage but there is the well-publicized fire truck that was damaged yet still intact.

There are a lot of recordings, Brent said, and a special room with eyewitness recordings about the falling bodies.

There are also damaged vehicles, the last column standing and the cross beam that formed just that and became a symbol of hope for the workers, Brent and the rest of us.