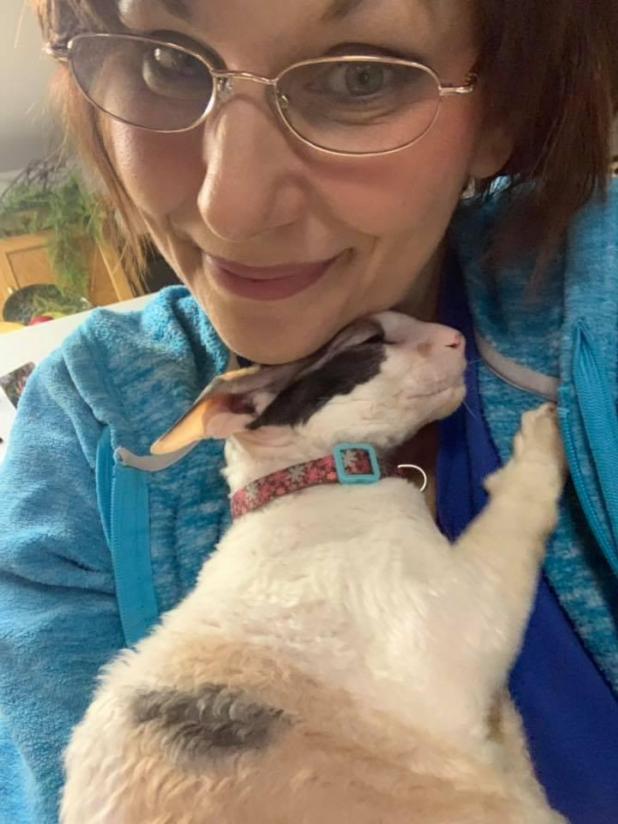 PETS Director Diedre Normand gets some affection from the aptly named Lovey. The calico cat became a resident of the PETS rescue shelter in Cottonport when her owner died. 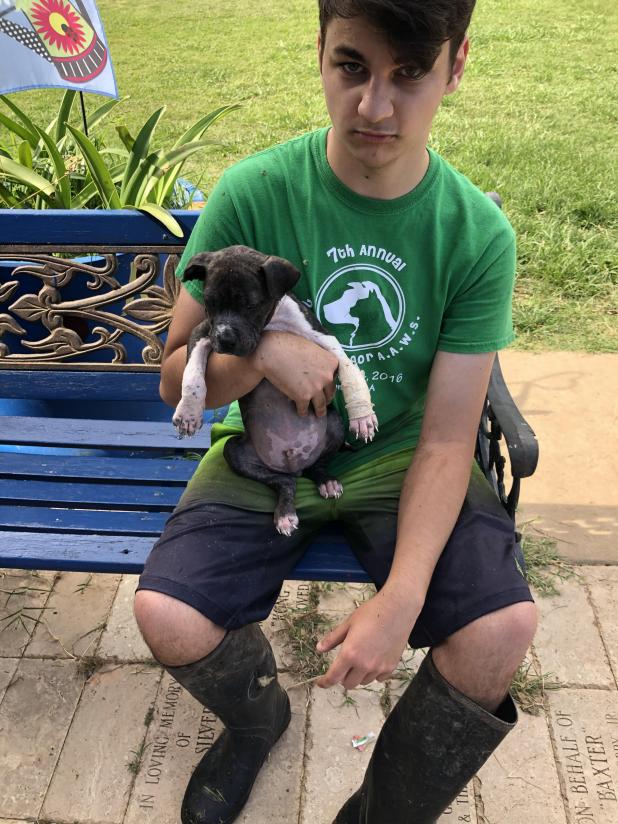 AAWS volunteer Tucker St. Romain, 18, of Hessmer holds Cracker -- a 2-month-old bull-mix found in poor condition on Crackville Road. The pup has received a lot of pampering and attention to regain his health.

While some municipalities and non-profit organizations do their best to provide a shelter to hold strays, runaways and abused animals, there is too little space and too few dollars to do all that needs to be done.

With that in mind, the Humane Society of Louisiana (HSL) declared June as “Support Your Local Shelter” Month and has launched a statewide campaign.

HSL Executive Director Jeff Dorson said the organization hopes to identify and highlight the needs of public animal shelters that must cope with a surplus of animals, insufficient funds and substandard facilities.

“There are probably more than 125 animal shelters in our state and at least half are in poor condition from years of neglect or were never properly constructed in the first place,” Dorson said.

“Many of our animal shelters are not much more than a row of rusty kennels, built on the edge of town,” he continued. “Often these kennels are located near the municipal water treatment plant and far away from neighborhoods that might object to the smell and noise of barking dogs.”

While a “dog’s life” is sad for those in need of shelter, it is even worse for cats and livestock.

“Many of the shelters lack the space or equipment to house stray cats or livestock and many lack even rudimentary accommodations such as hot water, fans or air conditioning, or an area for storage,” Dorson noted.

The Humane Society has been involved in Avoyelles Parish on several animal abuse/rescue operations and in dealing with municipal animal shelters.

It recently helped Simmesport reactivate its animal control program with improvements to its abandoned shelter facility. Dorson had supportive words for Simmesport’s efforts.

On the other end of La. Hwy 1, HSL has not been so kind to the City of Marksville.

Its complaints of the shelter’s condition last year led to the city making improvements and reopening the shelter earlier this year. However, HSL renewed its complaints, although Dorson conceded the photos in their file were a year old.

One complaint was from someone who said city employees barred people from seeing the dogs in the shelter.

City officials said that is not the case, but that the gate is locked if there are no employees at the Street Department work yard where the shelter is located.

Besides those two shelters, Bunkie operates a holding shelter and has an animal control officer. Plaucheville has one large cage where it can hold a few stray dogs until owners can claim them or “other action” must take place.

The smaller municipalities and unincorporated areas have little animal control/management services. There is no money to hire dog catchers and no funding to operate a shelter or shelters to take the animals to if they were caught.

For more information on how your municipality handles its animal control issues, call your Town Hall.

The Avoyelles Animal Welfare Society’s shelter in Cottonport is the oldest and probably best known facility.

“We stay full,” AAWS Treasurer Phyllis Lemoine said. “We are a no-kill shelter, so we keep our dogs and cats until they are adopted.”

The shelter has 30 dogs and 10 cats at this time. Lemoine said AAWS has sheltered 554 dogs since it opened the shelter in September 2012.

In addition to the number admitted into the shelter, AAWS has transported many animals directly out-of-state.

“We get calls from people every day asking us to take their dog,” Lemoine said. “We can’t take all of the animals.

“We will help them by posting photos of the dog on our Facebook page and helping to find people who want to adopt the dog,” she continued, “but we are limited in the number of dogs we can accept.”

When there is space, the shelter charges $25 to accept an unwanted animal.

“Some people don’t want to pay that, but it helps defray our costs,” Lemoine said. “We have to vaccinate, worm and spay/neuter the animal at our expense.”

Some of AAWS’ 48 members volunteer at the shelter and/or make regular donations to pay for the costs to operate it.

“We operate solely on donations,” Lemoine said. “We hold some fundraisers during the year and we get a few small grants to help.”

AAWS would like to expand its shelter, but that can’t happen unless it receives a sizeable grant to fund the project, Lemoine said.

Besides members volunteering, the shelter has one inmate worker and also has students throughout the school year who work for “community service” credits for school.

Lemoine said AAWS appreciates the youth who volunteer, but reminds parents that they are responsible for transporting the teens to and from the shelter.

The shelter is not getting as many donations from businesses, such as food or supplies, that it has in the past, she noted. The organization is hoping that commercial sector involvement will improve soon.

People Eager To Save started a “rescue shelter” in the Cottonport area in 2015.

PETS Director Deidre Normand said her shelter can hold 50 dogs. She also works with the Humane Society of Western Louisiana in DeRidder, which can hold 150 dogs and cats.

“We are not a dog pound,” Normand said. “We cannot take just any animal. We are a rescue shelter.

PETS takes animals that have been victims of abuse, neglect or part of a “puppy mill” that is shut down by authorities.

Normand said she also accepts “owner surrendered” dogs, but those are in cases such as the owner is very ill or is going into a nursing home.

The PETS shelter accepts only small breeds, Normand said. She coordinates with the Humane Society in DeRidder to find places for medium and large breed dogs in need of rescue.

Normand said there is a need for shelters for strays and for rescue dogs. With no public source of funding, private shelters are dependent on donations to fund their operations.

“People also need to become better educated on pet ownership,” she said. “They should look to their local shelters and rescue programs to adopt a dog rather buy one from a breeder.”

“People should learn the value of spaying and neutering an animal at an early age,” she continued. “They also need to realize the responsibility of owning a dog before they get one, how to raise a dog and not be ready to get rid of it when it is no longer a cute puppy.”

One thing Normand is proud of is her shelter’s involvement in the Wounded Warrior service dog project.

“We have donated dogs to be trained as service dogs to our veterans,” she said. “The dogs have a good home and the veterans have a companion and therapy/service dog to help them. It is a wonderful program.”

Dorson said HSL has been trying to improve the state’s animal sheltering system for the past 30 year, but has been frustrated by the lack of progress. It is now using social media to get its message to the public.

That message is simple and direct: “Local shelters desperately need more support from the communities they serve.”

Dorson said large shelters not only have more money to support their operation, they also have access to the internet and can post photos and information on the animals to let people know what dogs and cats are available for adoption. Smaller shelters can’t get that message out. As a result, they often have low adoption and high euthanasia rates.

“Most shelters are also grossly underfunded - often relying on one part-time employee to respond to calls, handle adoptions and feeding and cleaning the sheltered animals,” Dorson said. “It’s often an impossible task for any one part-time worker, resulting in a high turn-over of employees in the industry.”

TIPS ON HOW TO HELP

HSL suggests people can help their local shelter by:
-- Volunteering at your local shelter. Bring a group of friends or family for a workday, walking dogs or scooping cat litter. If the shelter doesn’t have a volunteer program, offer to start one or put on a fundraiser to purchase needed items;
-- Donating supplies to your shelter from their “Wish List.” If the shelter hasn’t compiled a Wish List,  ask the shelter manager if you can help create one for them on Amazon or at other online marketplaces;
-- Fostering pets to socialize them and make space for other deserving animals at the shelter; start a “Friends of the Shelter” Club to raise funds for vet bills; establish a trap-neuter-release program to save cats; set up social media accounts to help promote adoptable pets.

Dorson said HSL encourages people to send in photos and descriptions of their local shelter and a brief summary of the conditions to HSL at info@humanela.org.

He said they can use the hashtag #ShelterSupportLA to let others see the posts and comments associated with the campaign.

The effort is already paying off with several individuals and a foundation in Florida committing to help the shelter improvement effort.

He said HSL plans to distribute funds to several shelters during the first week of July, made possible from a generous grant from the California-based Taylor Family Foundation.

“The Humane Society also hopes that civil associations, area businesses and other foundations will donate as well,” Dorson said.