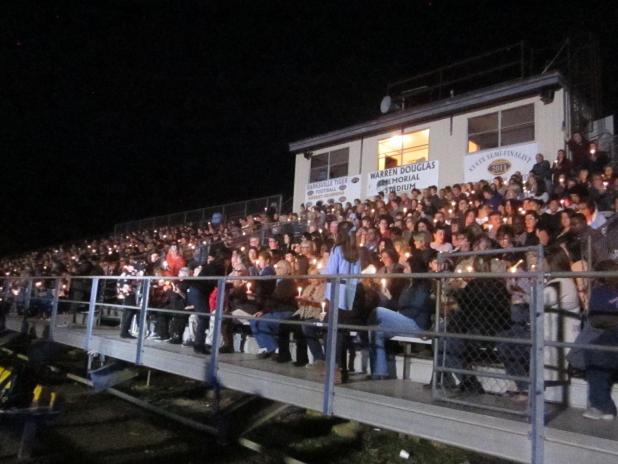 Marksville High School’s Warren Douglas Memorial Stadium was transformed into a starlit sky on Jan. 7 as hundreds of people lit candlles in memory of five children who were killed Jan. 3 in a multi-vehicle accident while on their way to Disney World. {Photo by Raymond L. Daye} 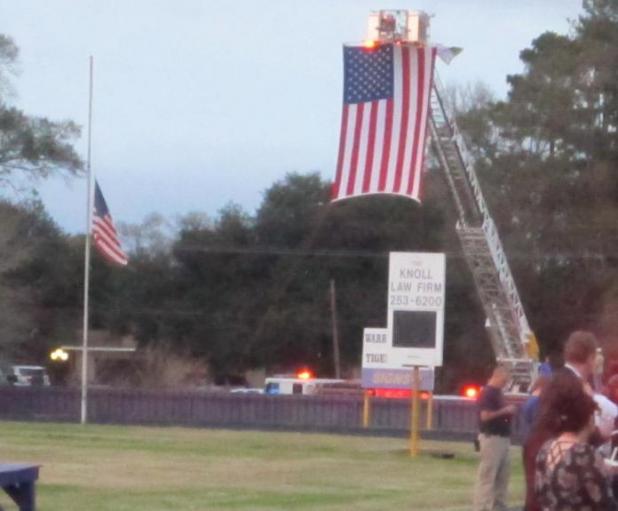 The Marksville Fire Department displays a large U.S. flag from its ladder truck while the flag at Marksville High’s Warren Douglas Stadium flies at half-mast during a community prayer vigil on Jan. 7. {Photo by Raymond L. Daye} 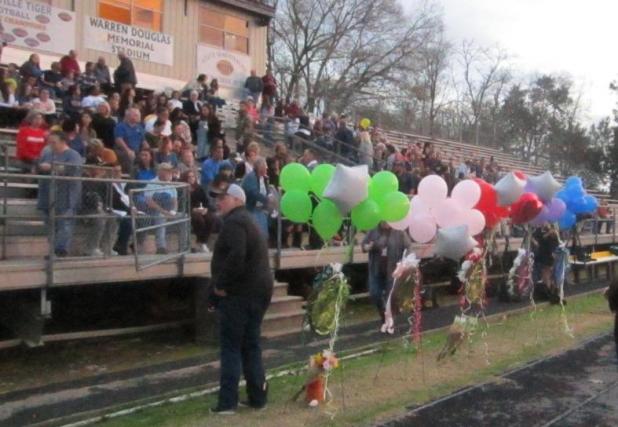 A line of balloons at a Jan. 7 community vigil stands in memory of the five children who died in the I-75 accident in Florida. {Photo by Raymond L. Daye} 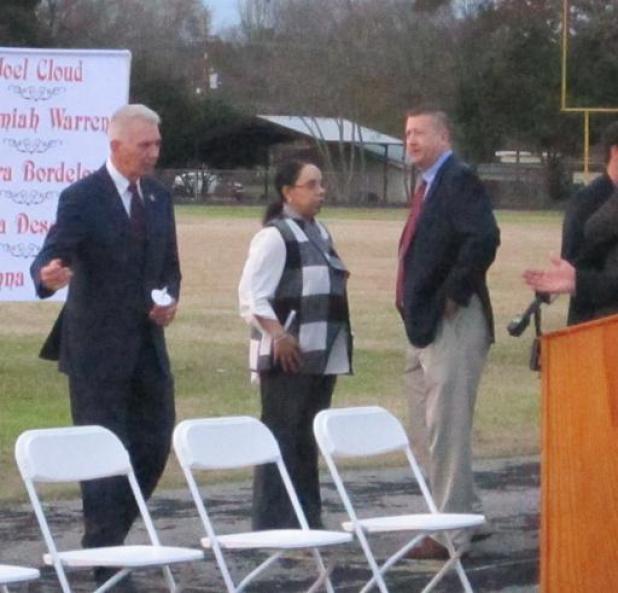 [From left] U.S. Rep. Ralph Abraham (R-La. 5th District), Marksville High School Principal Liza Jacobs and Avoyelles Parish School District Superintendent Blaine Dauzat share words of encouragement prior to the start of a candlelight vigil at Warren Douglas Stadium on Jan. 7. Jeremiah Warren, one of the five children killed in a multi-vehicle accident in Florida on Jan. 3, was an 8th grader at Marksville High. {Photo by Raymond L. Daye} 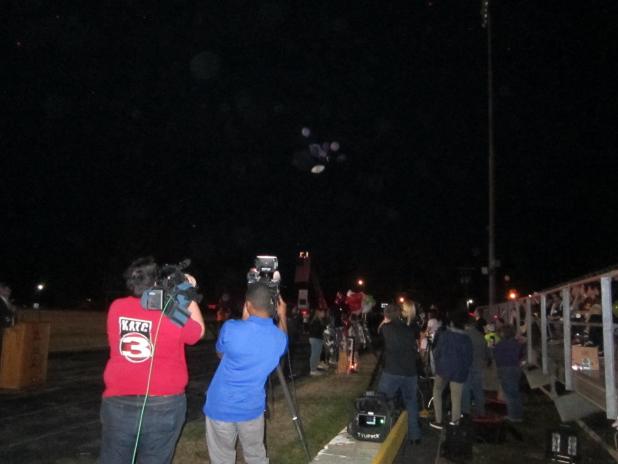 Several TV news crews and newsapers covered the Jan. 7 community vigil at Warren Douglas Memorial Stadium in Marksville. After nightfall, candles were lit and a group of balloons (barely visible in background) were released in memory of each of the five Marksville children killed in a Jan. 3 accident on I-75 near Gainesville, Fla. {Photo by Raymond L. Daye}

When tragedy strikes, it is okay to question God, to ask “Why,” a large crowd who gathered to mourn a recent tragedy was told this past Monday.

Rev. Anthony Mangun, pastor of the Pentecostals of Alexandria, said even Christ asked “Why” when he was dying on the cross.

“Why” was certainly a word on most people’s minds, if not their tongues, at the community prayer vigil for the five young victims killed in a fiery multi-vehicle accident while on a holiday trip to Disney World.

The candlelight vigil was organized by the Marksville Chamber of Commerce and held at Marksville High School’s Warren Douglas Memorial Stadium.

Later in the event, the names of those who died were read and a group of balloons in that child’s name was released. Those killed were Jeremiah Warren, 14; Brianna Descant, 10; Joel Cloud, 14; Cara Descant, 13 and Cierra Bordelon, 9, all of Marksville.

They were part of a church group from Avoyelles House of Mercy in Marksville. Seven other members -- four children and three adults -- were seriously injured in the accident that
also killed two semi-truck drivers and seriously injured the driver of the fourth car involved.

Mangun was one of several speakers at the hour-long vigil. He said everyone at the stadium was “in shock, grieving.”

He admitted that he had questions as to why this would happen, but found strength and comfort in knowing that “God is too good to do wrong and too wise to make a mistake.”

Even if we cannot understand God, “we can trust what He is doing.

“I trust Jesus tonight,” Mangun said, to a chorus of “amen” from the stadium bleachers.

Rev. Rusty Rabalais, pastor of St. Joseph Catholic Church in Marksville, noted that it is at times like this that Christians from all denominations come together “united as pilgrim Christians” in this world.

He said the Bible says where two or more are gathered in God’s name, He will be there with them.

“Don’t we sense that presence here tonight.” Rabalais asked. Many answered “Yes” while many more silently nodded their heads.

Rabalais also voiced the question of “how could such a tragedy happen.”

He said we do not have clear answers, but can “cling to the Word of God” for strength and solace.

Rev. Richard McGovern of Lighthouse Full Gospel Church in Marksville said all attending the vigil “feel the burden of these families.”

McGovern said the children were on their way to Disney World “to have a good time, but I tell you they are having a good time in Heaven right now.”

“There will be dark days ahead for a lot of you and for us,” U.S. Rep. Ralph Abraham told the assembly.

He said whenever one gets bad news -- whether it is from a “simple country physician” like him or in this kind of tragedy -- “you must search out your family, friends, pastor or priest and lean on them.

Rev. Mark Crawford, pastor of Christian Family Worship Center in Mansura, said that “in the midst of tragedy, we hear bad news -- but we can also share the Good News. The grave and death was conquered by Jesus Christ.”

Crawford said there have been numerous emails and social media posts saying the writers were praying for the families and the victims.

“Don’t just type those words, but put them into action,” Crawford said.

“Everyone of us will be changed by this,” he continued. “You don’t get over it. You live with it.”

Some may grow closer to God than they ever were before. Others may become angry and pull away from God, he said, “but we will all be changed by what has happened.”

District Attorney Charles Riddle was the emcee of the event.

He opened the vigil by looking at the filled bleachers and saying, “This is wonderful in light of the tragedy that has occurred.”

Such support from fellow-Christians “lifts us up in times of tragedy. Don’t stop praying.”

Rev. Eric Descant, pastor of House of Mercy, called from the hospital in Florida where his wife Karen is recuperating from serious injuries.

Mangun held the phone up to the microphone so the audience could hear Descant’s words.

Descant, who lost a granddaughter in the tragedy, said he “never knew a heart could break so much and still work.”

He said he knew people were praying for the families and appreciated the support from the community.

Descant said that it will take time to overcome the grief, but “we will get over it -- and God will get the glory out of it.”