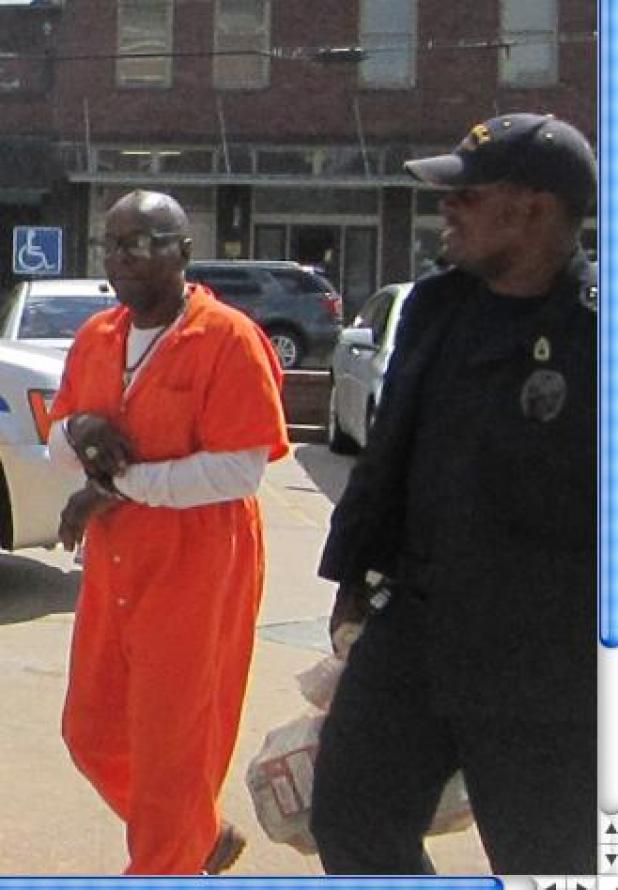 Vincent Simmons (left), sentenced in July 1977 to two consecutive 50-year sentences for attempted aggravated rape of 14-year-old twin sisters, is escorted into the Avoyelles Parish Courthouse for a hearing on Oct. 2. {Photo by Raymond L. Daye}

Simmons, 66, was in shackles and an Angola jumpsuit, but he was smiling and talking to a large group of family and friends as he walked into the courthouse for a hearing he hoped would lead to his release or at least to a new trial.

“I hope to see him walk out of the doors of this courthouse a free man today,” sister Olivia Simmons Eggins said prior to the hearing before District Judge Kerry Spruill.

Her prayer was not to be answered, as Spruill ruled in favor of the prosecution’s position that after four decades of appeals, the time limit for appeals has expired. Such motions are to be filed within two years of sentencing.

Simmons’ attorney, Bobby Hjortsberg of New Orleans, said he will appeal Spruill’s decision to the state 3rd Circuit Court and ask the 3rd Circuit to determine if Simmons’ time limit for appeals has expired, which he said he “vehemently believes” has not.

On the other side of the case, District Attorney Charles Riddle was the one smiling.

“I am pleased with the judge’s ruling,” Riddle said. “This was about the 25th motion filed on behalf of Mr. Simmons that has been argued before the courts since his conviction in 1977. I am hopeful that now this case can be put to rest.”

The key argument in the motion was that an alibi witness was never interviewed or allowed to testify in the July 1977 trial.

That witness is a woman who said she saw Simmons at a local bar the night two teenage twin sisters said Simmons raped them in a secluded area on a road near Marksville.

“It was never brought up at trial," Hjortsberg said. “In all the 40 years of all the filings, not one time was this individual ever mentioned.”

Spruill ruled that the testimony this witness gave was the same as one presented by another witness at trial, so jurors had the information when they voted to convict Simmons.

HISTORY OF THE CASE

Simmons is not even halfway through his 100-year sentence on two charges of attempted aggravated rape of 14-year-old twins that occurred in Marksville in May 1977.

He has maintained his innocence since his arrest. His case has been the subject of documentaries, books and an online effort claiming he was unjustly accused, tried and convicted and should be released.

One of the twins has also written a book telling her side of the story asserting that she is positive Simmons was the man who raped her and her sister.

Court officials familiar with the case -- not the ones who originally prosecuted and presided over the case -- said the justice system “got it right” 41 years ago and Simmons’ appeal is without merit.

Eggins, 61, of Mansura but currently living in Baton Rouge, said she came to the hearing Tuesday to see her brother outside of the confines of a prison for only the second time in 41 years.

Simmons was in court last year for another hearing on this round of appeals.

Simmons has 10 sisters and one brother still alive, Eggins said. Some are half-siblings, but she said that does not make any difference in the way they see Simmons.

She noted that four brothers and a sister have also passed away over the past four decades that Simmons has been in prison.

“He has a family that loves him,” she added.

Among the group of supporters was Marian Bultman of Ysselmuiden, Netherlands, who is an active online advocate for Simmons and his defense fund.

Bultman and a few others wore T-shirts proclaiming “I am Vincent” and “Free Vincent Simmons.”

Most of the family members wore matching black T-shirts with the outline of a heart containing a quote from Simmons: