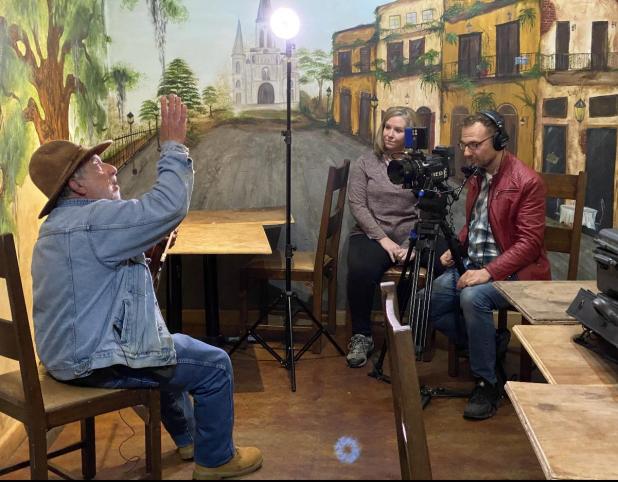 Gerard Dupuy of Moncla (far left) talks to Melissa Goudeau and Marshall Woodworth for Marksville’s video application for the HGTV network’s “Home Town Takeover” series. The six-part special event will air in 2021. HGTV will select six small towns to be given a “whole-town makeover” that will include historic buildings and homes as well as public parks and recreation areas. The non-profit Marksville Main Street spearheaded the application project. {Photo courtesy of Melissa Goudeau}

Municipalities throughout the nation are applying to become one of six home towns selected for an overall makeover, compliments of HGTV’s new “Home Town Takeover” series.

Among the many hopeful towns and cities located from the Atlantic to the Pacific and from the Great Lakes to the Gulf are Avoyelles Parish’s Marksville and Bunkie.

Groups from both municipalities submitted their applications for the coveted spots before the deadline this past Tuesday (Feb. 4).

The six-part special event will air in 2021.

“We’re confident of our chances because we think there is so much unrealized potential for a tourism economy here in Marksville,” Jacques Goudeau, a leader in the Marksville application effort, said.

“If Marksville is selected, HGTV would actually be kick-starting a true investment in the community that Marksville could then take and run with,” Goudeau continued. “Marksville has more untapped potential than 99 percent of all other towns out there.”

Goudeau is president of the non-profit Marksville Main Street organization, which is focused on revitalizing downtown Marksville.

The organization’s 10-member board of directors heard about the HGTV series and decided it was too good of an opportunity to ignore.

Goudeau is also chairman of the Marksville Historic Preservation District Commission. Since one element HGTV is interested in is local history and historic buildings, Goudeau was able to combine two of his passions in one project.

“The creative linchpin in that production was Terry Dupuy,” Jacques Goudeau said. “He is a talented audio engineer and had contacts needed for the video.”

“Wayne Wilson of Wilpro Services donated some really nice camera equipment for our use,” Goudeau continued.

“The four of them went all around town,” he said. “They went to the Indian Mounds Park, Spring Bayou, the Courthouse Square area, Paragon Casino Resort, Broken Wheel Brewery, the Bethune Youth Center and a few of the older residential areas in town.”

The film crew also visited the Weekly News -- the state’s oldest weekly newspaper, beginning publication in 1843 under the name of the Villager.

Although the City of Marksville is not an official partner in the application process, Mayor John Lemoine said he hopes HGTV looks favorably on Marksville for the makeover.

“It sure would be nice,” Lemoine said. “We would be glad to participate and be a part of the program.”

The video project not only provided what Goudeau believes will be a convincing pitch to earn the whole-town makeover slot, but “gave us a ton of great stock footage that we will be able to use in future marketing opportunities.”

HGTV’s Ben and Erin Napier, stars of the network’s “Home Town” series, came up with this spinoff series idea to help revitalize selected communities and breathe “new life into an entire town that’s struggling and in need of some TLC (tender, loving care),” HGTV said in its announcement seeking applications for the makeover.

The Napiers have experience in whole-town transformations. They have worked to rescue and enhance dozens of homes in their own home town of Laurel, Miss.

They have also played a pivotal role in revitalizing Laurel’s downtown and celebrating its architectural treasures, endemic charm and historic features.

“Renovating one house at a time is an awesome experience, but the chance to support an entire town, where we help bring a community back to life — that's something we’ve always wanted to try,” Ben Napier said.

HGTV solicited applications throughout January from any “small town” with fewer than 40,000 residents.

Applicants were encouraged to highlight aspects of their town that make it special, fascinating, historic or unique — including distinctive features like vintage period architecture, special destinations or a classic main street.

Citizens of a selected town can expect to witness the rehabilitation of multiple individual family homes and the revitalization of public spaces such as parks, local diners/restaurants and outdoor recreation areas, an HGTV spokesperson said.

“This is a big one,” Erin Napier said. “HGTV has never, ever taken on a whole-town renovation and restoration project, and we’re so proud and excited to be leading the team that will get it done.”