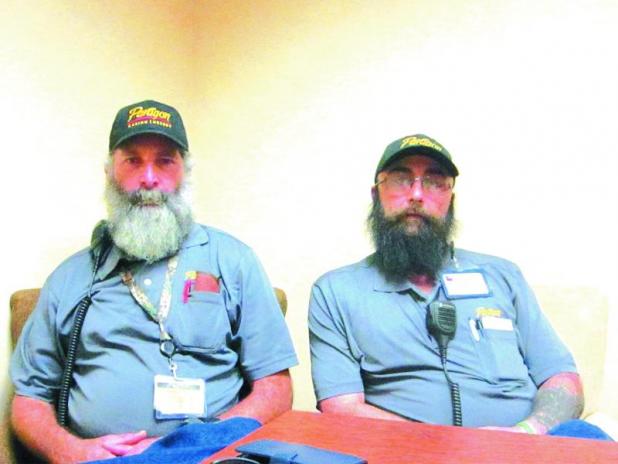 On a cold pre-dawn morning a few days before Christmas, what was intended to be a fun day of duck hunting in Pomme de Terre Wildlife Manage-ment Area almost ended in tragedy.

Three young hunters were rescued from a burning boat and frigid water due to the alert eye and quick response of Paragon Casino electricians Jason Builodeau and Dieter Dubroc.

“We were setting up our duck blind when I looked out across the water and saw a fire,” Builodeau said. “Before I got the ‘r’ in ‘fire’ out of my mouth, Dieter had the boat cranked up and we were in forward motion.”

Builodeau said the small fire he saw “became a big fire as we got closer. When we got there, the boat was engulfed in flames and the three young men were in the water.”

Dubroc said the three hunters were able to keep their guns above water.

“We got their guns in the boat and then pulled them in,” he said. “They were able to save their guns and themselves, but that’s about it.”

Builodeau said they wanted to get the men into their boat “as quickly as possible because I was afraid there might be shotgun shells that might go off in the fire.”

As they sped away from the fire, “we heard the popping of shotgun shells,” Dubroc said.

There were some duck blinds closer to the fire, and some hunters came up to see if they could help after the three men were pulled to safety by their rescuers.

“I was trained in firefighting on an oil rig,” Dubroc said. “When you have fire on the water, there’s no time to think. You just react.”

What seemed like a slow-motion eternity while it was happening actually took only 10 minutes from start to finish.

“They were shivering and cold,” Builodeau said. “We got some coffee into them and cranked up two personal heaters we brought with us.”

“I asked them how it happened,” Dubroc said. “One of them said they were trying to light a barbecue pit and the fire started.”

“One of them kept saying, ‘My boat, my boat,’ Builodeau said. “I told him the boat isn’t important. What is important is that they were all safe.”

There were no injuries in the incident.

Builodeau said the parents of the young men reached out to thank them for saving their sons. “One of the boys gave us a thank you gift,” he said.

The young hunters were in their late teens, Builodeau said.

Dubroc and Builodeau carried the hunters back to their vehicle on shore and then returned to continue their outing.

“We stayed until 2 p.m. that day and didn’t shoot anything,” Dubroc said. “We went back the next day and got a few.”

The two men were recognized by the Paragon with a special awards ceremony. Each received a plaque, a medal for bravery and a gift certificate.

Both men are from the Moreauville area and “have been hunting and working together for over 30 years,” Builodeau said.

“We’ve worked for electrician companies and air conditioning companies all over the state,” Dubroc noted.

Looking back on the event, the two men don’t really see themselves as “heroes,” but only as someone who did what needed to be done when others were in need.