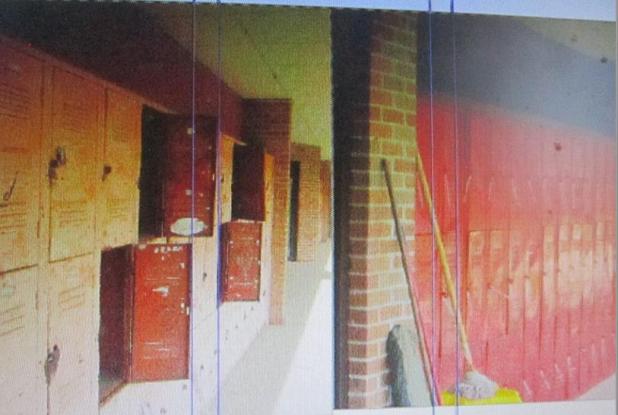 Lockers that have been empty for a decade (left, in May) on the campus of the former Mansura High School have been refurbished and made ready for a new generation of students at Red River Charter Academy. The new school will start its first school year on Aug. 20 for grades 6-8. 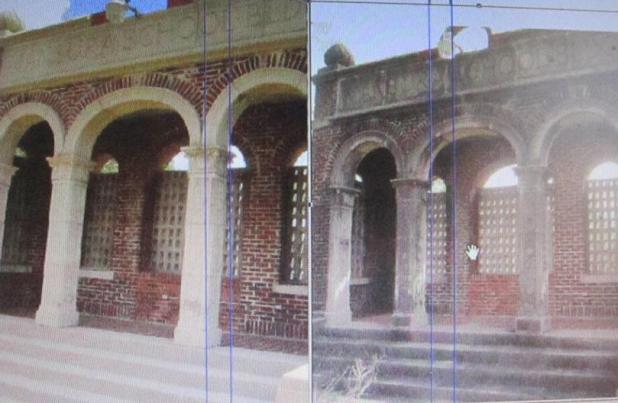 The front facade of the old Mansura High stands in the center of the campus. After a decade of neglect, the facade was gray (right). Now it has regained some of its original luster (left) to welcome the first students of Red River Charter on Aug. 20 and to serve as a symbol to merge the campus’ past with its future.

Red River Charter has come a long way this summer

Some may think that applies to the progress made since the new state-approved independent public school started work cleaning up and renovating the long-closed Mansura High/Middle School campus in early May to get it ready for its very first “First Day of School” on Aug. 20.

Others may take a more “big picture” view of that statement, thinking back to the many years of planning, organizing and fighting the Avoyelles School Board and state Board of Elementary & Secondary Education before BESE finally approved the charter in December 2018.

RRCA Executive Director Stephanie Moreau said there has been “a lot of activity at the school this summer.”

Teachers had their first day at the school on Aug. 1.

When RRCA officials did their initial “walk-through” on May 7, after the lease went into effect on May 1, they were met by a wide assortment of spiders, wasps and other “creepy-crawlies” who called the vacant buildings home.

The school will add a grade level each year until it is a 6-12 high school. RRCA has hired a company to provide bus transportation to and from school. There will be centralized bus stops in communities around the parish. The school will be using the four-day school week adopted by the Avoyelles School Board.

It will focus on the STEM subjects --science, technology, engineering and math -- but will also have top-flight curriculum in the liberal arts subjects of English/language arts, social studies and electives such as art and music.

While academic excellence is the priority of the new school, it will also have a full slate of sports programs for the “Red Gators,” Moreau said.

The school will have junior high basketball, baseball and softball teams this year. In a few years, a football team will take to the field adjacent to the school.

But those plans had to be set aside while buildings were cleaned, junk removed, repairs made and “critters” evicted.

Couvillion said the Town of Mansura and parents of the school’s first students stepped up to help get the school ready for its first opening day.

Now the former Mansura High School is ready once again to welcome a new generation of students to its classrooms and hallways.

“It is an exciting time,” Moreau said. “We appreciate the community support we have received.”

She said RRCA, as a Type 2 charter, is allowed to accept students from outside of Avoyelles Parish. She said there are several students enrolled who attended school in another parish last year.

Most of those, she noted, live in Avoyelles Parish. A few live in neighboring parishes.

A LOT OF HISTORY

There is a lot of history on the campus.

Trophies tell of the Trojans’ accomplishments. Plaques list the graduating seniors, including the 1988 class -- the final one for Mansura High.

The school remained open as Mansura Middle School until the Avoyelles School Board closed the three middle schools in 2008 and moved 6th grades to the elementaries and the junior high grades to the high schools.

There are overhead projectors in classrooms -- a reminder of the technology in vogue when the last middle school student sat in those classrooms .

The facade of the 1929 era Mansura High occupies a prominent place on the campus, surrounded by buildings constructed several decades ago -- the newest being built only six years before the school lost its high school grades.

Moreau said the gym is in excellent condition, except for some doors that will be installed prior to the start of school.

One wing which features large classrooms and the bandroom will not be used this year due to the amount of repairs and work needed to it. However, Moreau said it will be used for the high school grades as they are added.

Repair work on that wing should begin around the first of the year.