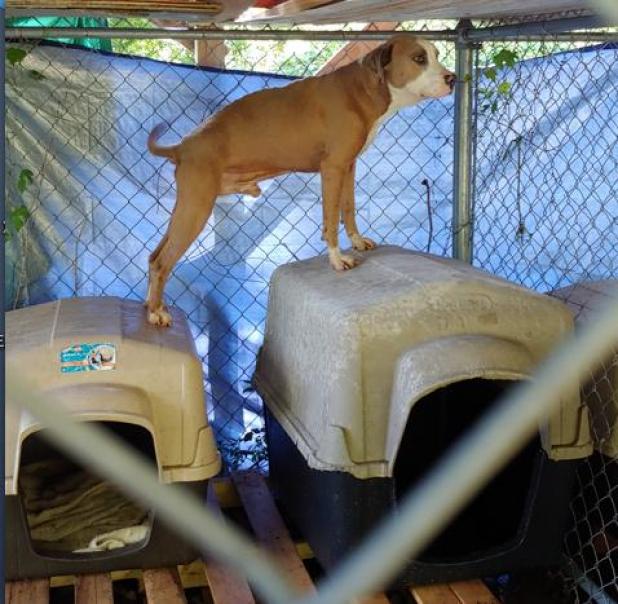 KING OF THE HILLl
Rico, a bulldog mix, stands on top of two doghouses in a kennel at the Simmesport Dog Pound. The small holding shelter has space for 10 dogs and usually has six or seven on hand. {Photo courtesy of Linda Desselle}

After several years of inactivity, the Simmesport dog pound is back in operation.

“It’s going good,” Police Chief Damion Jacobs said. “We are picking up strays based on complaints we receive.”

On a recent day, the pound had seven dogs.

The pound will also take vicious dogs and dogs rescued from abusive situations, Jacobs said, but it has not received any of those cases since reopening.

The town’s operating plan is to “keep them until they are adopted,” Jacobs said.

The town was able to revive the shelter due to donations of fencing, kennels, food, water bowls and other supplies and equipment needed to operate the shelter. The Humane Society of Louisiana was also involved in the project.

“We helped them network with HSL members who stepped forward to help the shelter,” HSL Director Jeff Dorson said.

Kendrick Washington is Simmesport’s animal control officer. His task is made easier with some volunteers.

A few care for the animals in the shelter while others assist by donating food, paying for vaccinations and medical treatment or temporarily adopting the dogs until they are healthy enough to be adopted.

Desselle said some businesses, like Tractor Supply Company, are regular donors. The shelter should probably have no more than 10 dogs at one time, Desselle said.

“When we opened, we had 13,” she continued. “I took two home and a couple of other women took two each to keep until the dogs were healthy enough to adopt.”

Desselle said the shelter has already seen some “success stories” since it opened.

One is a tan and white bulldog mix named Rico “who was a skeleton when we got him. Now he’s doing fine. He is the sweetest thing.”

Rico has literally become the “top dog” in his kennel, often standing astride the top of two doghouses to get a better perspective on what is going on.

The shelter has a roof over its six kennels. It is located near the Simmesport Community Center Complex -- the former Dunbar High/ Simmesport Elementary School.

Dorson said the Humane Society has designated June as “Support Your Shelter Month.”

“We are encouraging people to step forward and help these small rural shelters,” he said. “Many are operating on a shoestring and are in need of public support.”

Dorson said the HSL will also be working to help the small shelters “and make it a year-round effort.”