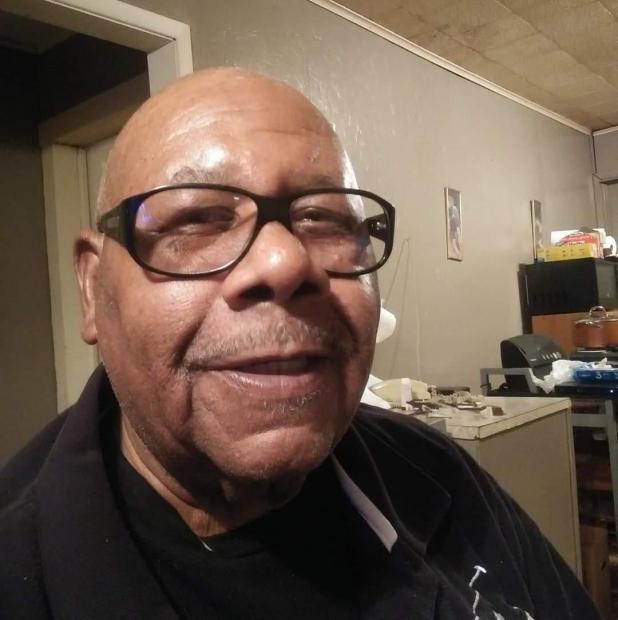 Sylvester “Sonny” Callihan 79, of Simmesport gained his wings and transitioned from his earthly home on August 30, 2020 in Alexandria,LA at ChrisitusSt. Frances Cabrini hospital after a brief illness.
He leaves to mourn yet cherish his memory a wife:, Geraldine Callihan of Simmesport,LA, three adoring Daughters: Carla Wright of Baton Rouge,La;Shelia U. Callihan and Keithca Callihan-James (Allen) of Simmesport,LA one faithful Son Wendell Callihan of Simmesport,LA four stepchildren ; Tori Clark, and Brodick Smith of Simmesport, LA, Ryan Smith of Houston, TX, and John Smith (Marva) of Belleville,IL Three Grandsons who he loved and adored unconditionally : Tedrick Wright of Simmesport,LA; Chester Callihan of New Orleans,LA; Steven Smith of Simmesport,LA.Five loving Sisters Mattie C. Hall, Rosie C. Kelly, and Geneva C. Williams of Simmesport; Effie C. Miller and Louella C. Cunningham of Houston,TX Two loyal brothers Jeff Callihan and Dave (Edna) Callihan of Houston,TX. Five sister in laws Betty Johnson, Carol Burkhalter(John), Ida Dupar(Alton), Agnes Jackson, and Rose Armstrong; 4 Brother in laws: Earnest Armstrong, Wilbert Percy, Sr., Author Jackson,Jr., James Jackson,(Helen), and Six God Children: Alma Jones Jackson and Cornell Cooper of Simmesport,LA. Yolanda Baines Smith of New Orleans,La; Quintin and Angela Payne of Houston,TX and Sharon Williams Cross of Port Author,TX.
And a host of nieces, nephews, as well as other relatives and friends.
Bro. Callihan was born on February 1, 1941 to the late Ren and Virginia Gorrell Callihan in Rosa,LA. He was baptized at an early at at St. Luke Baptist church. Later he moved his membership to Pilgrim Rest Baptist Church where he served faithfully under the direction and leader ship of three pastors; Rev. Hy. Wright, Rev. C.A. Harris and Rev. Henry Wright IV. While a member of Pilgrim Rest he served as usher, a Sunday school teacher, deacon and ultimately as Deacon Chairman until his death. On November 3, 1962 he was united in holy matrimony to Sis. Joyce Marie Armstrong, to this union three children were born. They shared a happy life rearing their family. After the transition of his first wife, he later, joined in matrimony to Sis. Geraldine Jackson on August 17, 2001. Educated at Paul Lawrence Dunbar High School; Brother Callihan also received other various vocational certifications and diplomas including law enforcement, ulpholstery, welding, and small engine mechanics. He was a dedicated public servant. But of these, his passion was law enforcement. He held various public offices such as Constable and Police Chief to which he was appointed by the Town of Simmesport and continued a successful career in politics. After serving two terms as chief, he retired and became again constable for Ward 7. During this time he worked very closely with Justice Roger Adams Sr often conspiring that relationship as one like a family. He bragged constantly on Justice Adams’ dedication and service alongside him.This was a position he served until his transition. He served on boards and committees throughout Avoyelles Parish. He also worked and retired from Georgia Pacific. Since his retirement, he spent his days ,as he described it, “being an errand boy for his grown children.” He also loved going to church, the post office and to his friend Mr. Dempsey Spears’ barbershop. He meant so much to so many people. He was Daddy to his children, Granddaddy and Pawpaw to his grands. His siblings knew him as big brother Sonny.He was Uncle Sonny to many nieces and nephews. Others simply knew him as Sylvester, Mr. Sylvester, or Mr. Callihan. There were some who just called him Cal, Cap or Chief. Regardless of how you knew him he will be sadly missed and greatly remembered.
He was proceeded in death by his parents Ren and Virgina Callihan, His first wife and mother of his children Joyce Marie Callihan, two sisters Bertha Callihan Brown and Barbara Callihan Clark and A father-n-law AuthorJackson,Sr.
May the work I’ve done speak for me. Acts 9:36-41
9 My task is to bring out in the open and make plain what God, who created all this in the first place, has been doing in secret and behind the scenes all along.Ephesians 3:9
Friends and family are welcome to come pay their respects on Friday September 4, 2020 at Pilgrim Rest Baptist Church 420 Lincoln Street Simmesport La.. Viewing will be from 9:00am until 11:00am with the service beginning at 11:00 a.m. Services is entrusted to St. Edwards Funeral Home Bunkie Louisiana.