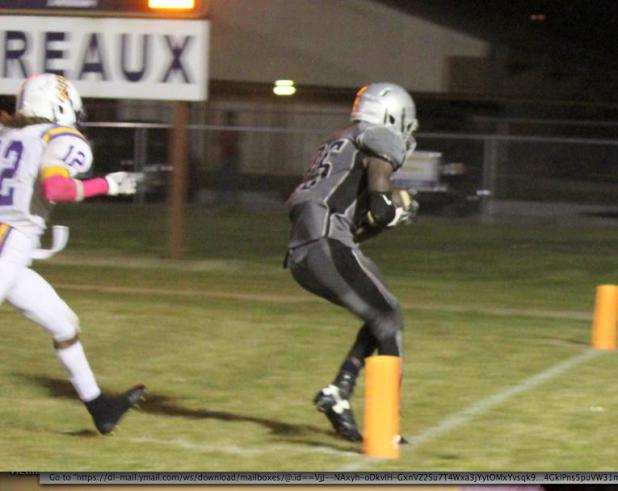 Avoyelles halfback Myron Robertson scoots into the endzone after catching the game-winning touchdown pass in last Friday’s Homecoming game against the Marksville Tigers. The 36-30 victory was the Mustangs’ first over Marksville since 1995 -- a 21-year losing streak. {Photo by Connie Giovanetti} 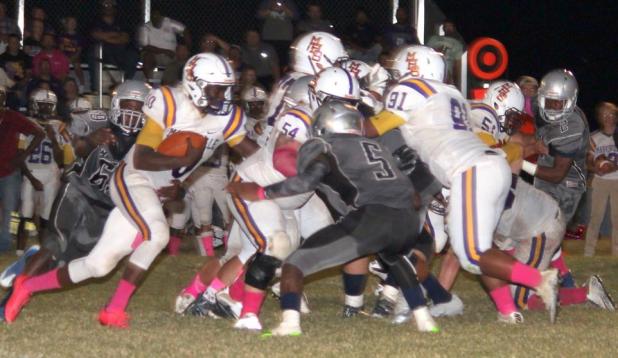 Marksville quarterback Daniel Miller (#10) hits the line en route to a 1st down during last Friday’s 36-30 loss to Avoyelles. {Photo by Connie Giovanetti}

No matter how much unpleasantness there may be between the Avoyelles Mustangs and the Marksville Tigers, both teams are rooting for their rivals in a week that has playoff implications for both of the parish’s District 3-AAA teams.

A double-play by the AP teams throws the District 3-AAA title up for grabs, putting four teams at 2-1 with two games to go.

Following are brief summaries of this week’s high school football games. For more details on the games, see this week’s Marksville Weekly News and Bunkie Record.

It wasn’t a championship game, but it seemed like one when the final ball was batted down and the last second ticked off the clock at Mustang Stadium last Friday.

For 21 years, the scoreboard at the end of the Marksville-Avoyelles game showed the Tigers victorious. Before a Homecoming crowd, the Mustangs came from behind twice and then held off a determined last minute drive to defeat Marksville, 36-30.

It was the first time since 1995 that Avoyelles won the intra-parish District 3-AAA rivalry game.

Ball control has been something Bunkie High has been striving for all season. On Friday, the Bunkie Panthers spoiled the Winnfield Tigers’ Homecoming with a ball control offense and the best defensive effort of the year to post a 26-7 District 3-AA win.

Bunkie improved to 2-5 overall and 1-1 in district play while Winnfield dropped to 0-7 on the season and 0-2 in league play.

Bunkie travels for the second week in a row this Friday when they go to Coushatta to play Red River High. Red River is 5-2 overall and 2-0 in district play after a 36-8 win over Lakeview last Friday night.

The Panthers kept the ball away from Winnfield most of the game. Bunkie opened with a running attack but changed to an aerial assault midway in the second quarter after lineman Jacob Bordelon went down with season-ending injury.